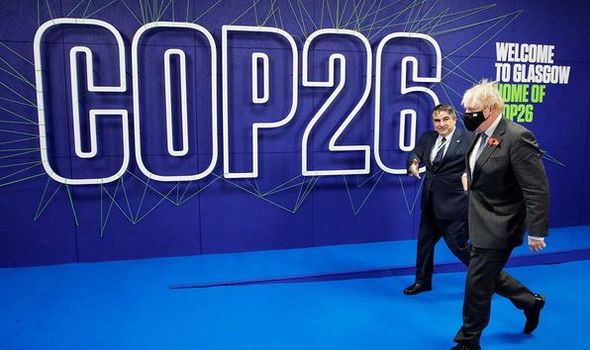 A Daily Express poll found the vast majority believes the climate is already changing and is worried for future generations.

The Prime Minister’s quest to lead the world with a Green Industrial Revolution also gets the thumbs up with many willing to pay more for greener products.

People are already changing their lifestyles to reduce emissions by opting to walk and cycle more or taking fewer flights – though Covid may have reduced opportunities.

However, the Government’s crusade to replace gas boilers with greener but more pricy heat pumps is much less popular.

Despite the protests at COP26 by millennials led by Swedish activist Greta Thunberg, 18, the older generation seems in many cases to be much greener.

The poll of 2,220 UK adults by Savanta ComRes was released with 120 world leaders due in Glasgow for the two-week conference billed by the Prime Minister as the “world’s moment of truth”.

COP26 is seeking to find ways to deliver the 2015 Paris Climate Agreement.

It found that 75 per cent of UK adults say man-made climate change is real with just 13 per cent dismissing it as a myth.

Surprisingly, given the impact of teenage climate activist Greta Thunberg, about one in five of 25 to 44-year-olds are climate sceptics.

But 82 per cent of UK adults think the climate is already changing with just five per cent disagreeing. And 77 per cent fear for the impact on the next generation of the extreme weather.

The Government’s eco-message has also been getting through with most having heard of Net Zero and 59 per cent confident they could explain what it means – it’s the target of offsetting all greenhouse gases produced by humans.

And 69 per cent support the drive to Net Zero with only seven per cent objecting. There is also a strong belief that Britain should pioneer Net Zero to set an example to the rest of the world – backed by 60 per cent – with a similar proportion believing that leading the world would bring commercial benefits by letting us export our expertise.

But 48 per cent say that if we go it alone without the rest of the world following we risk damaging our economy. There also seems to be a growing acceptance that adopting a climate-friendly approach will cost more.

The poll found that 57 per cent would be willing to pay extra for greener alternatives such as renewable electricity, electric cars and sustainably produced food – rising to 72 per cent among younger adults.

But nearly four in 10 do not want to pay more to go green. It is a similar story on tax with 50 per cent willing to pay more to support the Green Industrial Revolution and 41 per cent opposed.

Worryingly for the Prime Minister, this opposition rises to 52 per cent among Conservatives – a reminder of the low tax expectations of his party and its supporters. Overall only 10 per cent would be willing to pay “a lot more” tax to support the Green Industrial Revolution.

Meanwhile, Britons are already embracing a greener lifestyle. Half of us are already walking or cycling more, 42 per cent have insulated their roof and 34 per cent fly less, though Covid travel curbs may explain that.

Many more are willing to try going green with 43 per cent happy to buy an EV or a hybrid, 40 per cent are ready to get a greener heating system or install solar panels and 20 per cent are thinking of taking fewer plane trips.

The message on eating less meat to reduce emissions is not as successful with 71 per cent calling themselves meat eaters and only 14 per cent claiming to be vegetarian, pescatarian or vegan.

There is an age difference with one in five 18 to 34-year-olds going meat-free compared with only nine per cent among the over 55s.

But when it comes to support for the Government’s flagship heating policy – replacing gas boilers with electric heat pumps – Mr Johnson is in trouble.

And despite the widespread support for action to tackle climate change, 60 per cent of adults say £5,000 is not enough.

What mission has the US accomplished in Syria?