Home » Lifestyle » Could this £13 gadget be the secret to staying young?

Could this £13 gadget be the secret to staying young? Celebrities swear by it – and for once, experts say the science behind it stacks up

To hold back the years, you could spend a fortune on anti-ageing creams, costly Botox injections and even more expensive fillers.

But the most powerful and best-value tool in your beauty armoury could be a device that costs just a few pounds — a tongue scraper.

Bizarre as it sounds, new scientific research suggests that getting a healthy balance of bacteria in your mouth — particularly on your tongue, which has more than 200 different kinds — may be the key to looking younger.

This is because ‘good’ oral bacteria appear to help production of a molecule called nitric oxide, which in turn plays a crucial job in regenerating damaged and old cells.

And according to the world’s leading expert on nitric oxide, Dr Nathan Bryan, scraping the back of your tongue for five seconds every day with a curved metal scraper will remove significant amounts of food particles and debris and help ‘good’ bacteria to flourish. 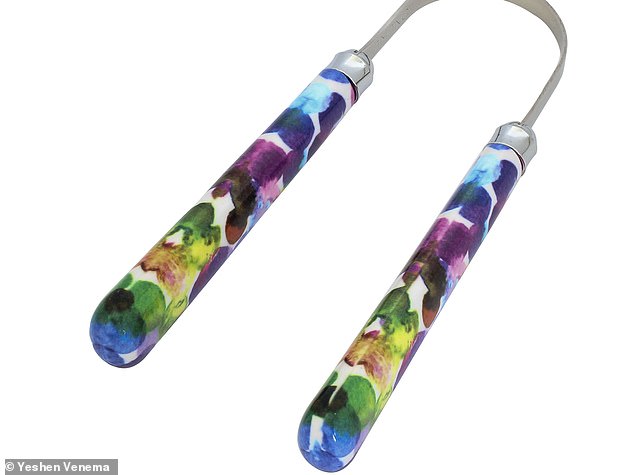 Tanith Carey spoke to experts who claim tongue scrapers (Pictured: An Amano tongue scraper) can help slow the signs of aging. Dr Nathan Bryan claims tongue scraping helps the process that protects all the tissues in the body from advanced ageing

Dr Bryan, a specialist in molecular medicine from Baylor College of Medicine, Texas, says: ‘Our data suggests that the bacteria on the tongue contribute about 50 per cent of the body’s total nitric oxide production. Tongue-scraping may allow for more diversity, so the “good” bacteria flourish and generate more nitric oxide.’

Most tongue scrapers consist of a U-shaped piece of metal that is sometimes attached to a plastic handle or handles. The scraper is then gently dragged across the surface of the tongue, forward from the back of the mouth, after brushing, either in the morning or at night.

They are said to be more effective than cleaning your tongue with a toothbrush, which have softer bristles that just move debris around rather than remove it like the rigid edge of a scraper.

So how does nitric oxide help keep you younger? Scientists now say that ageing is caused by three factors. As we age, the telomeres at the end of our chromosomes, which help our DNA replicate accurately, don’t work as well.

Over the years, we produce poorer, more faulty copies of our DNA. At the same time our mitochondria — the power packs inside cells — stop working as hard as they used to, so our cells don’t get as much energy. And the third reason is that stem cells also become less efficient at helping the body to repair damage.

Dr Bryan, who is soon to publish a further study on the link between the bacteria in our mouths and better health, says nitric oxide helps to regulate all three of these processes — and slows down the decline in these functions.

He explains that good oral bacteria produce chemicals called nitrites, which build up in your saliva. When you swallow, the nitrites mix with the acid of your stomach and turn into nitric oxide. And he adds that this process ‘protects all the tissues in the body from advanced ageing’. 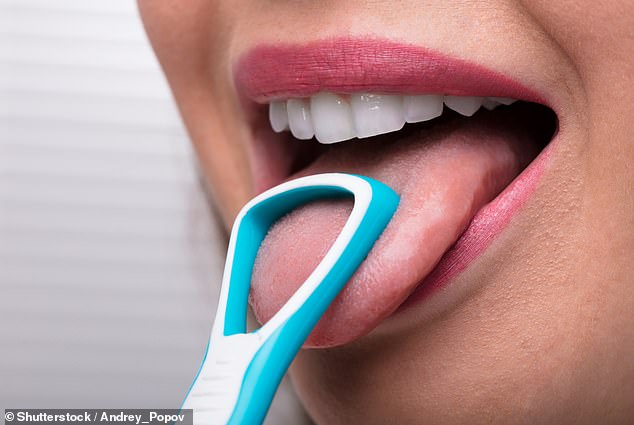 Over time everything from your organs to your skin could age more slowly, Dr Bryan says.

So the older we get, the more important it is to get the right balance of oral bacteria, he says.

‘As we age, we gradually lose our ability to produce nitric oxide. So by the time we reach 40 or 50, we only have about half the amount we had when we were younger.’

Although the latest scientific findings are new, tongue-scraping is not. The practice dates back thousands of years.

In Indian Ayurvedic medicine, practised by celebrities such as Gwyneth Paltrow and Sarah Ferguson, regular cleaning of ‘ama’ — the supposedly ‘toxic’ coating on the tongue — is recommended for good health. So could Gwyneth be onto something?

Tongue scraping has been recommended by the key journal of British dentistry, the British Dental Journal, which also backs the theory that it ‘helps fight the ageing process’. It also says the practice helps to clean the palate, ‘enabling taste buds to function better’. It’s a view endorsed by the Government’s Malnutrition Task Force — an independent group of experts aiming to help older people eat better. ‘Up to our middle years our taste buds are renewed every ten days or so,’ a spokesman said. ‘However after middle age renewal rates slow so there is a rapid decline in the number of taste buds we have and their efficiency. And as we age our saliva production reduces. When we combine both lower saliva levels and fewer taste buds, we can see why (being able to taste less) can become a reality for many.’

Tongue scraping, some experts say, can also help with bad breath. According to a study in the Journal of Peridontology, about half of bad breath cases are caused by a build-up of bacteria on the tongue. While brushing teeth removes half of the microbes to blame, tongue-scraping has been found to reduce them by three-quarters.

Gum specialist Dr Reena Wadia says tongue-scraping should be just as much a part of keeping our mouths healthy as brushing our teeth.

‘Many bacteria live on the tongue as it provides the perfect environment for them to thrive. We usually find the back part of the tongue harbours the most bacteria, compared with the tip.

‘Tongue scraping removes the bacteria that cause bad smells. It also helps remove remnants of food and enhances your taste buds and the flavours you experience.’ 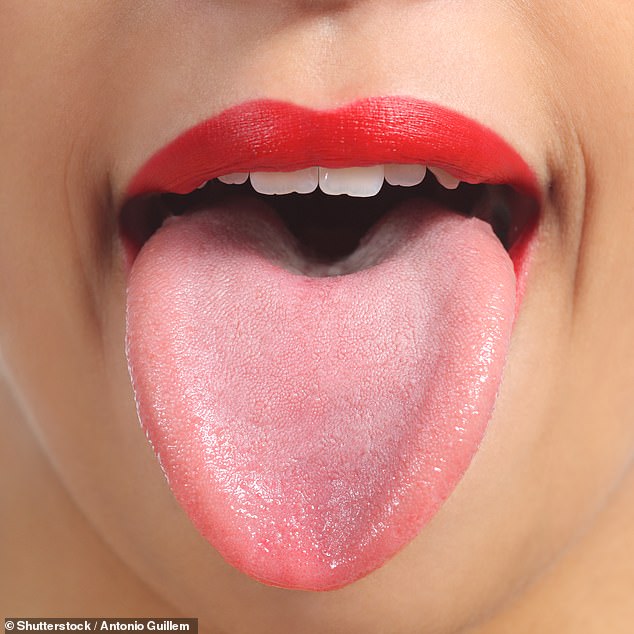 Some experts even say tongue-scraping could help your teeth look whiter, too. A study by the Journal of American Dentistry found counts of streptococci — one of the main bacteria that forms yellowing plaque — increase dramatically when the tongue is not cleaned.

However Ramona Petri, a Brighton-based dental hygiene expert, is more sceptical. She says: ‘Tongue scraping addresses a limited area. Aggressive removal of the coating may cause damage to the nerve endings of the taste buds, resulting in a temporary lack of taste.’

Despite her scepticism, perhaps it’s no surprise that sales of tongue scrapers are booming, with high-end stores Harrods and Selfridges now stocking them. Other products hitting the market include a ‘stilo- brush’ which acts like a tongue ‘suction cleaner’.

Even a high-end tongue scraper won’t cost much more than £20. Company director Mano Manoharan starting making Amano tongue-scrapers in the early Nineties after late nights at work as a record company executive left him with a coated, furry tongue. After a friend gave him a scraper, he noticed a dramatic improvement.

Mano, 60, says: ‘It’s becoming more mainstream — toothpaste manufacturer Colgate even has a ridge on the back of some toothbrushes for tongue scraping.

‘Yet many are still embarrassed to admit to tongue scraping. Most still associate it with solving problems with bad breath.’

If Nathan Bryan is right, then a tongue scraper could soon be as much a feature of the bathroom cabinet as anti-ageing potions.