Daniel Andrews’ political retreat over COVID-19 case numbers and lockdown measures has been a lesson in political acrobatics.

And few politicians could pull off such a spectacular backflip and land with such composure and control. 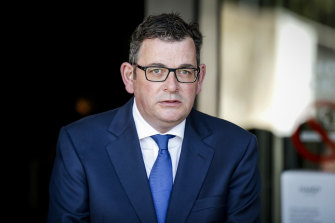 Victorian Premier Daniel Andrews has managed to switch positions on re-opening and still land on his feet.Credit:Getty Images

It was just nine weeks ago that the Victorian Premier declared there would be no way Victoria would open up with a 70 or 80 per cent vaccination rate, unless cases were also very low.

“The aim is zero or as close as we can get, that’s the national plan,” he insisted at the time.

Yet, when lockdown lifted at 11.59 pm on Thursday, Melburnians were finally freed from the state’s sixth lockdown as the state recorded 2232 new locally acquired cases of COVID-19 and 12 deaths – the second-highest daily case tally on record. 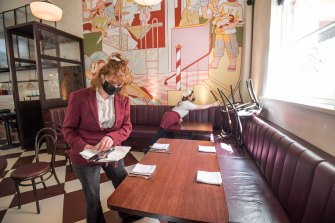 In August, Andrews pitted Sydney as the enemy, suggesting the Berejiklian government had lost control of its outbreak due to its failure to enforce a “ring of steel” to protect the rest of the country. Now, with five times as many case numbers as our neighbours to the north, Andrews is championing a new era of open borders, claiming that the two states are now “very much aligned”.

At any other time in our political history, such a dramatic policy retreat would have left the government vulnerable to a political attack. The fact that the Premier has not only survived, but appears to be thriving in this new era of “COVID normal”, is a testament to his unrivalled communication skills and political nous.

Critics, particularly those in the Liberal Party, have attempted to take credit for Andrews’ recent change of heart, claiming constant pressure from the Coalition, particularly in Canberra, was showing up in internal polling.

While there is little doubt Andrews was persuaded by political motivations, Labor MPs believe the Premier’s reasons were far more pragmatic. Those closest to him say he had becoming increasingly aware of the community’s growing fatigue with lockdowns and an increasing recalcitrance of the population.

To put it simply, lockdowns were no longer working.

“It was driven by the reality of fatigue, they realised you can’t lock down anymore, people aren’t following the rules, and they are no longer as scared of the virus,” one Labor insider said.

The high vaccine rate also granted Andrews rare political cover. With each dose, Victorians made their own risk assessment and their appetite for greater freedoms surpassed their desire for state-sanction protection.

That is to say that the vaccination uptake not only accounted for a drop in the number of people following the health measures, but provided voters with the space to accept a dramatic political change of course.

Questioning the political motivations behind the Andrews government’s policy flip doesn’t mean Labor couldn’t also see the political opportunity in ending lockdowns now, despite the soaring numbers. With a little over 12 months until the election, the government will face a plethora of economic challenges as it attempts to rebuild a shattered economy following months and months of lockdowns.

Political pollsters believe the Andrews government has already suffered ramifications from its 2020 second wave but believe much of carnage was isolated to smaller pockets in outer Melbourne which will make for tighter contests in the seats of Cranbourne, Bass, Pakenham, Werribee and Melton at next year's election.

Landing a blow on Labor for easing restrictions was always going to be a tough ask for the opposition, especially one that has spent recent weeks attacking their favourite enemies; each other.

But the easing lockdown measures will likely present the Coalition with a rare political opportunity and potentially expose Labor to a damaging political attack.

The latest modelling by the Burnet Institute predicts that as restrictions ease, daily case numbers will peak at close to 4000 per day in mid-December.

While the speed and uptake of vaccinations will reduce the predicted impact on the states healthcare system, fears remain for Victoria's hospitals which will still come under pressure as restrictions ease.

Andrews will likely be forgiven or his shifting stance on lockdowns and case numbers as it has resulted in freedoms so many Victorians have longed for. But Labor MPs fear that the government will struggle to fend off a political attack over the state of the healthcare sector given Andrews has been in charge, as health minister or Premier, for 11 of the past 15 years.

They know the power of such a political assault. It was only seven years ago that Labor rolled out a similar strategy ahead of the 2014 election, pinning deaths due to hospital waiting times and ambulance delays on the Napthine government.

Annika Smethurst is state political editor for The Age.