Home » Lifestyle » CRAIG BROWN: In a huff? Then you'll be happy in Umbrage

CRAIG BROWN: In a huff? Then you’ll be happy in Umbrage

A few days ago, my colleague David Jones wrote a fascinating piece about East Grinstead, identifying it as ‘The Town That Went Sects Mad’.

Not only is East Grinstead home to the European headquarters of the Church of Scientology, but there is a vast Mormon temple in a village nearby.

On top of all this, the West Sussex town is said to act as a magnet for Rosicrucians, Druids, Satanists and members of Opus Dei, the obscure and secretive Roman Catholic sect.

At least this has diverted attention from the town of Umbrage, recently twinned with the towns of Brouhaha in Germany and Pique in France. For over a century now, Umbrage has been the go-to destination for some of the angriest people in Britain.

Along with its outlying villages — Huff, Uppity, Grudge and Peevish — it has established itself as the perfect place to let off steam. 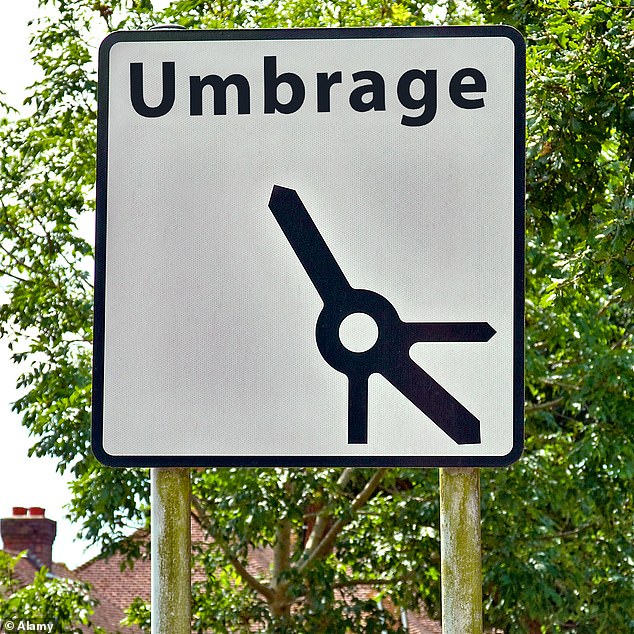 For over a century now, Umbrage has been the go-to destination for some of the angriest people in Britain

The BBC’s Question Time programme has been broadcast from Umbrage. Gordon Ramsay has his finishing school there, teaching young chefs to berate their apprentices.

I then drove past the Harold Pinter Theatre, internationally renowned for its annual production of Look Back In Anger, past the Beggars Belief public house and straight on until I reached the Very Crossroads, with its imposing statue of Henry VIII towering above the sign ‘I SAID KEEP OFF THE GRASS’, and, next to it, another sign: ‘CAN’T YOU READ?’

When I arrived at the Umbrage Visitor Centre, I was greeted by Chief Tourist Officer Frank Bickering.

He was standing outside, looking ostentatiously at his watch and sighing loudly. ‘What time do you call this, then?’ he said.

I apologised for being two minutes late. ‘Two? More like three,’ he replied. ‘And don’t forget to wipe those shoes. Heaven knows where they’ve been.’

As Mr Bickering guided me into the centre, he informed me that I was entering at my own risk and that, furthermore, any breakages would have to be paid for. It was opened in 2015 by John Cleese, in a rousing speech delivered through a megaphone.

He began the speech on a characteristically light note. ‘I’m only doing this because I need the money for my divorce,’ he said, before adding: ‘And since you ask, jokes are extra.’ 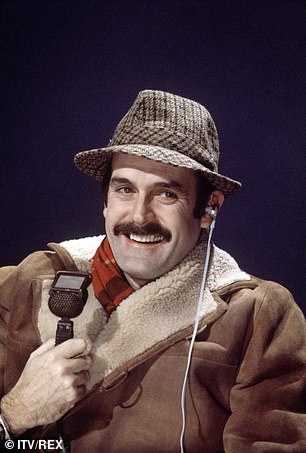 The Umbrage Visitor Centre ‘was opened in 2015 by John Cleese, in a rousing speech delivered through a megaphone’

I asked Mr Bickering if he could explain why Umbrage has become home to quite so many angry people. ‘Angry? Who says we’re angry? They’ve got a bloody cheek.’ He said he preferred the term ‘disgruntled’.

And we’ve got plenty to be disgruntled about. ‘I mean, the sheer lack of respect these days. It makes you want to kick people.’ He told me that a great many famous residents agreed with him, among them Oasis frontman Liam Gallagher.

When Liam appeared at the Umbrage Music Festival last year, he sang the first few lines of All You Need Is Love before pointing at the audience and barking ‘Who you lookin’ at?’ and storming off stage.

I plucked up the courage to ask Mr Bickering if the townsfolk had ever thought of investing in counselling for anger management. ‘Typically stupid question,’ he replied.

‘We pride ourselves on our Anger Management Centre — and make sure you spell that C-E-N-T-R-E, not C-E-N-T-E-R, which, let’s face it, should be banned as a disgusting Americanism.’

He told me that the Umbrage Anger Management Centre (motto: Don’t Get Me Started) trained hundreds of people every year to manage their anger.

‘If you manage it successfully, you can increase it by up to 500 per cent. We’ll show you how to make a minor irritation blossom into a bit of a gripe and from there into a fullscale temper tantrum.

‘A high proportion of our former students have since become late-night phone-in hosts on leading radio stations. The others are the guests.’

In these uncertain times of Brexit, Covid, Trump and Cancel Culture, the previously quiet town of Umbrage has been a howling success, with thousands flocking to live and work there.

Mr Bickering even suggested that there are plans to annex Umbrage with the neighbouring town of Chipping Sourpuss, which is now acknowledged as a leader in online grievance, supplying up to 22 per cent of the world’s insults and complaints.

‘Makes you feel proud,’ he said. ‘Though not you. People like you don’t know the meaning of the word.’

Avengers 4 directors are lining up their first post-MCU movie

Lynn Cohen, 'Sex and the City' Actress, Dead at 86