A daughter has revealed how she was left shocked after discovering her father identified as a woman – after finding wigs and sex hormones in his bedroom.

Jessica Newsom, from Baton Rouge, Louisiana, was 20 when she found progesterone – a female sex hormone involved in the menstrual cycle – in her father’s room.

Her father, then known as Jeff, later came home and told Jessica he enjoyed dressing as a woman, and it was something he had liked doing since he was young.

Four years later, Jeff decided he wanted to live as a woman full-time and became known as Julie.

Jessica explained how it took her a couple of months to process the news, but has fully supported Julie’s journey. 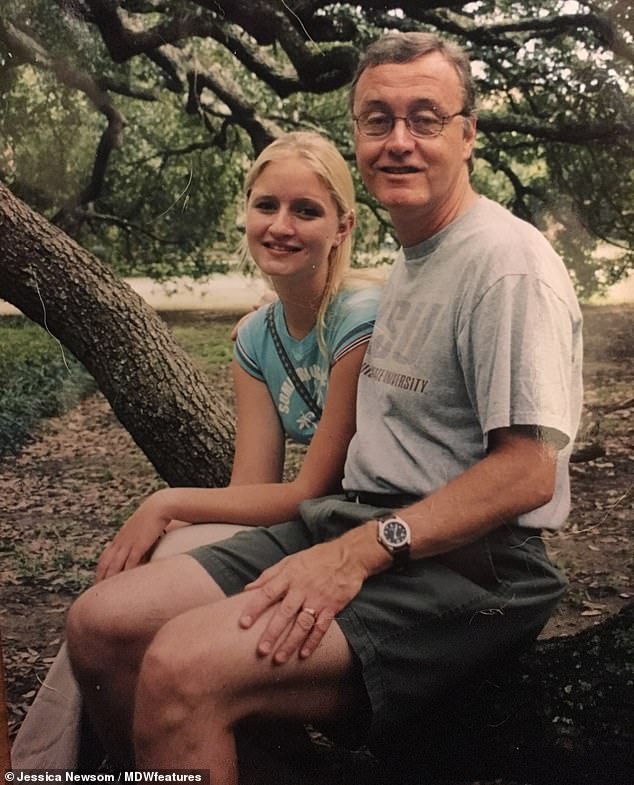 Jessica Newsom, from Baton Rouge, Louisiana,has revealed how she was left shocked after discovering her father Jeff (above with Jessica as a child) identified as a woman 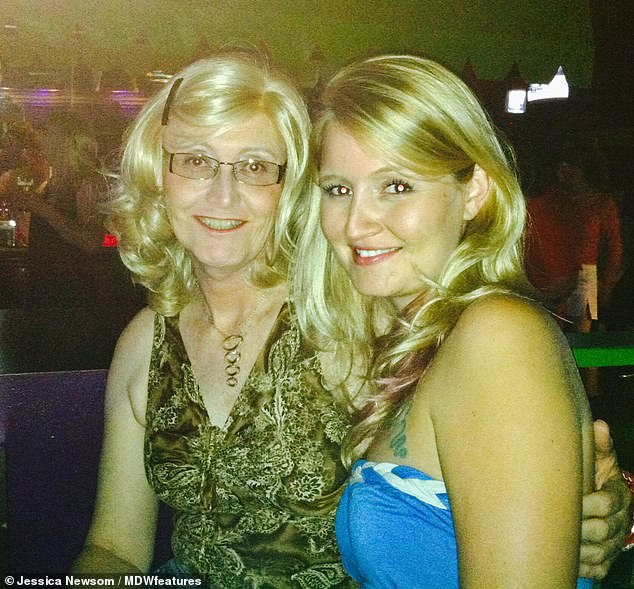 Jessica explained  how she discovered wigs and sex hormones in her father’s bedroom. Her father Jeff is now known as Julie (above with Jessica)

Mother-of-one Jessica, now 34, explained how her parents were separated when she discovered her father identified as a woman.

‘I moved away from my family when I started college in 2003 and in the years that followed, my mum was diagnosed with breast cancer and my parents separated,’ she said.

‘As I was not living close to home anymore, I was confused and often felt it was my mother’s fault as she started seeing another man during her treatment.

‘I would speak with my parents on the phone, but I never got any answers and when I came to visit, that’s when I found out my dad was dressing as a woman. 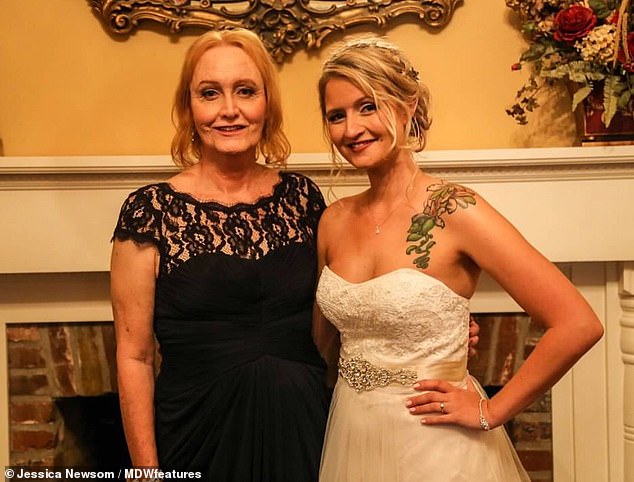 Jessica, pictured with Julie (left) on her wedding day, explained how she has fully supported Julie’s journey 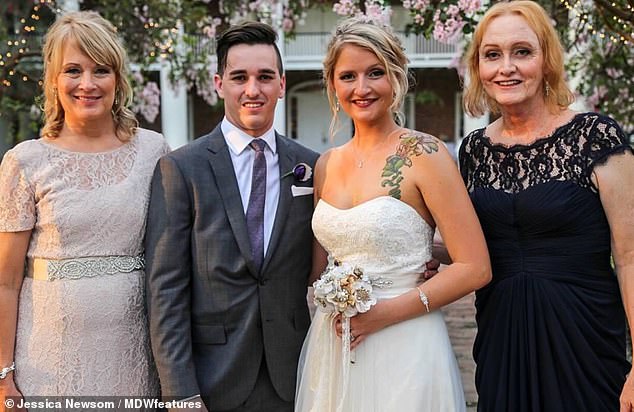 Jessica (pictured with her husband Jacob on their wedding day, along with her mother Lori, far left, and Julie, far right) explained how her parents were separated when she discovered her father identified as a woman

‘I was home on a visit in 2005 and I had this odd feeling to go into her room. This was not even on my radar, but my mum said, “Your dad has some things to tell you”.’

Jessica said she discovered her father had wigs in his room at home, as well as sex hormones.

‘I wasn’t sure what to expect and when I saw the wigs in the corner, I thought, “That’s weird. Was that from a Halloween costume?”

‘And as I was looking around the room, I saw some prescriptions. I had this sinking feeling.

‘I went to the internet to find out what it was, and while I was reading its purpose I started freaking out. I called my boyfriend at the time and explained what I had found.’ 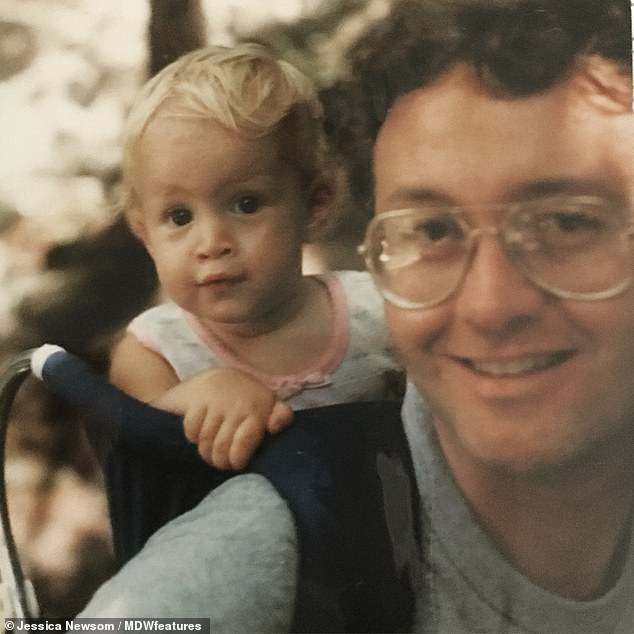 Jessica (pictured as a child with her father, when he was known as Jeff) said her father told her he enjoyed dressing as a woman, and had done since he was a child

Jessica (far left, with her mother Lori, brother and father when he was known as Jeff) explained how her mother had told her that Jeff has something to tell her on her return from university 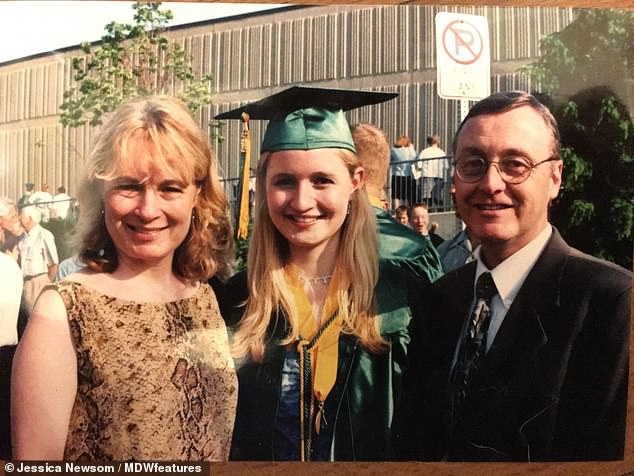 Jessica (centre at graduation with her mother Lori and her father, when he was known as Jeff) said she didn’t know how to react to the news at first

Jessica described how she struggled to process the news at first, explaining:  ‘I didn’t know how to react, what to do, or what to say. I remember just walking around the house not knowing what to do, just feeling unsure about what had been happening with my family.

‘I had often felt responsible for my parents splitting up, but I started to realise that there were many factors which I hadn’t expected at all.

‘It was later that day my dad told me what was going on; they came home, and I felt a little odd, but it wasn’t very long before they sat me down and told me that they enjoy dressing as a woman.’

Jessica said her dad, who now identifies as Julie, discussed the feelings she has had since she was a child.

‘Julie explained that it was something that she enjoyed since she was little. She explained that whenever she had the opportunity to put on my mum’s dresses when we weren’t home and walk around the house, she would,’ Jessica said. 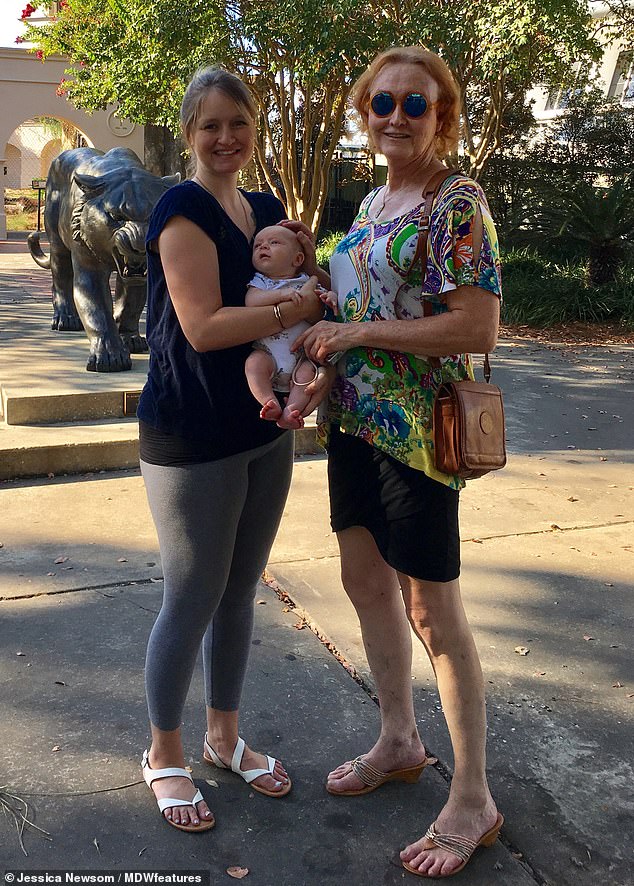 Jessica explained how her son Clark (above as a baby) calls Julie ‘grandma’. Her toddler is now two years old 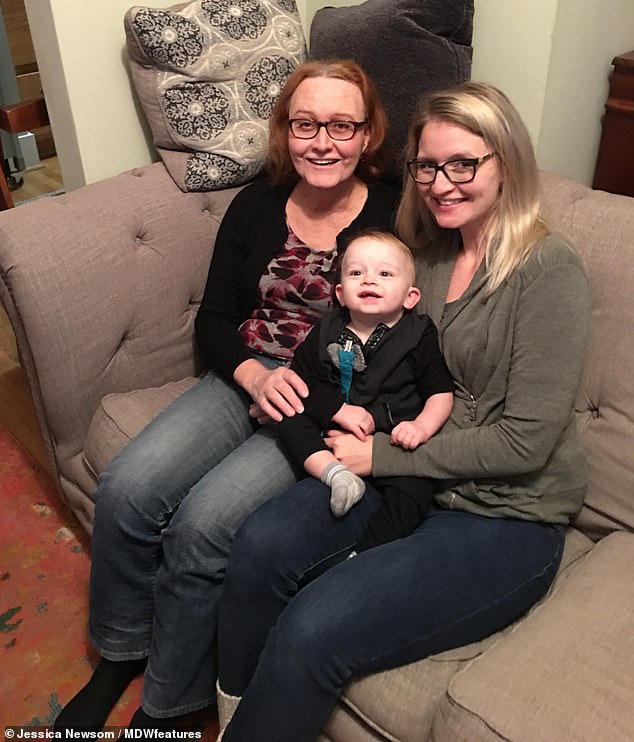 Jessica (above with Clark and Julie) explained how she enjoys a close relationship with Julie, after supporting her through her transition

‘She then removed her socks and also showed me her painted toenails and talked about how she loved the feeling of nail polish on her nails.

‘My next visit home she was dressing as a woman more often. She still went to work as a man but came home and started to go out in public as a woman. This is where we went out to ‘T-Girl’ nights and she found her tribe.’

Julie explained how she felt nervous when she began to identify as a female, particularly when she went to work for the first time.

‘Initially I was filled with numerous emotions, depending upon the circumstances. I was excited and exhilarated to be able to express my gender identity, but in public situations, I was nervous and apprehensive, wondering if people would accept me,’ she said.

‘Going to work for the very first time as Julie was incredibly nerve-wracking. Fortunately, things went well, and I’m mostly comfortable and accepted. 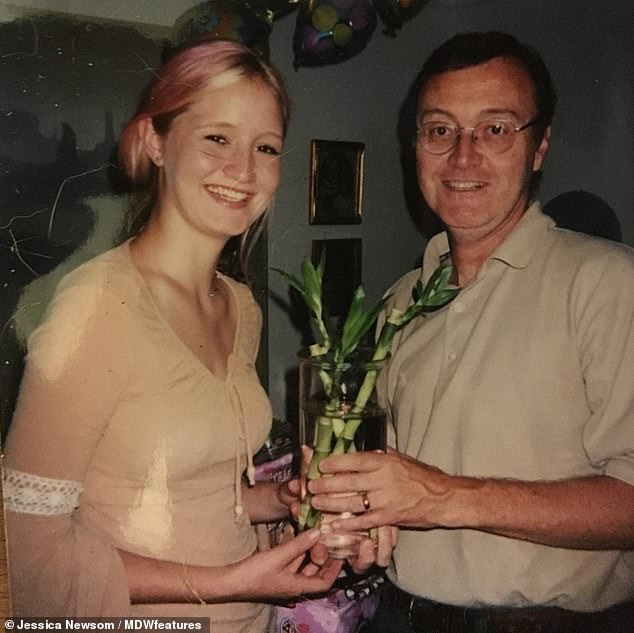 Jessica (pictured with her father when he was known as Jeff) explained how her father began dressing as a woman more, after she discovered his wigs and sex hormones 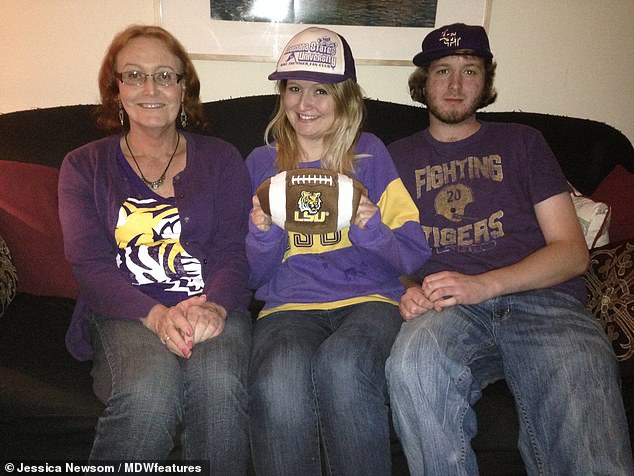 ‘I was very nervous, even embarrassed. I very much wanted their acceptance, it was difficult. But I always tried to raise them as open-minded people, so there was some confidence that they would be accepting. It was a huge relief to get it over with.

‘My life has settled down dramatically. My mind is no longer so occupied with gender issues, and I’m no longer very attached to the transgender community.’

Julie said she had told her ex-wife Lori soon after their divorce and they had a meal together.

In 2009, she decided she wanted to live her life as a woman and officially changed her name in 2011. In May 2015, she underwent sex reassignment surgery and was accompanied by daughter Jessica.

‘I told my ex at a time we were separated, and we had already filed for divorce. She was extremely surprised at first but accepted it very quickly. We got together soon after at my apartment for dinner, with me “dressed”,’ Julie said. 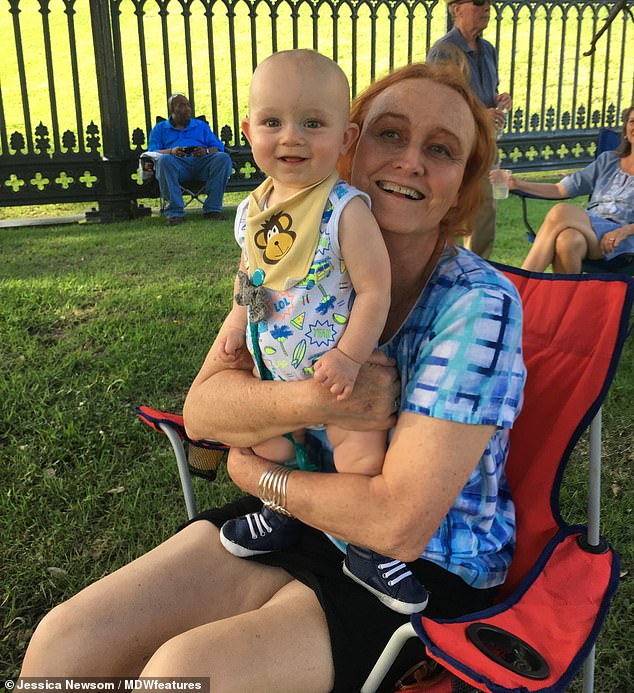 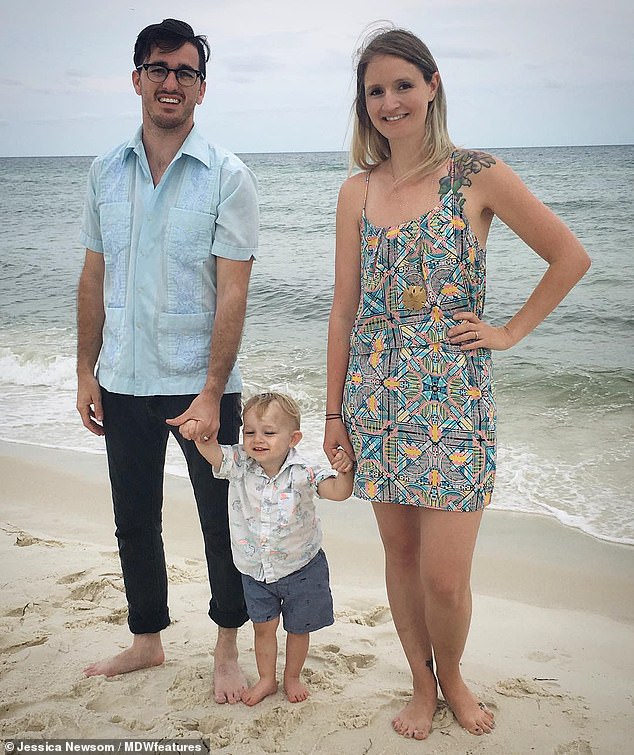 ‘I was concerned, particularly with my son and those “father” type issues. However, both of my children were adults at that time, and I had faith in their acceptance.’

Since Julie’s transition, she has been receiving support from her daughter, Jessica, who accompanied her to drag nights, cheering her on.

Jessica explained how she told her now husband, Jacob, on their very first date about Julie.

‘When I met my husband, I told him on our first date about Julie to see his reaction and when he acted like it wasn’t a big deal, I felt like I was in good company,’ she said.

‘It was strange seeing my dad as a woman and trying to act differently to appear more feminine. 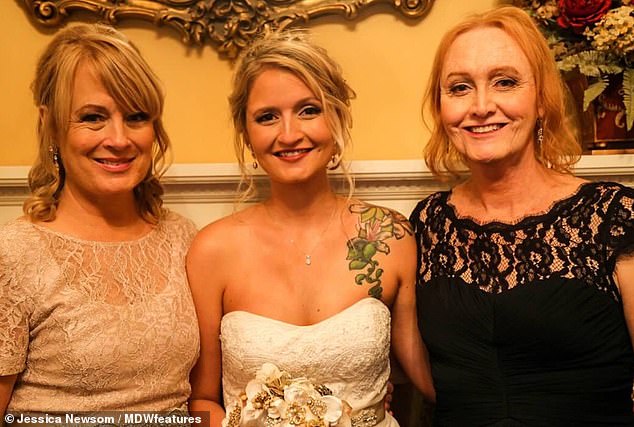 Jessica (pictured centre with her mother Lori, left, and Julie, right, on her wedding day) said at home Julie still seems the same person to her 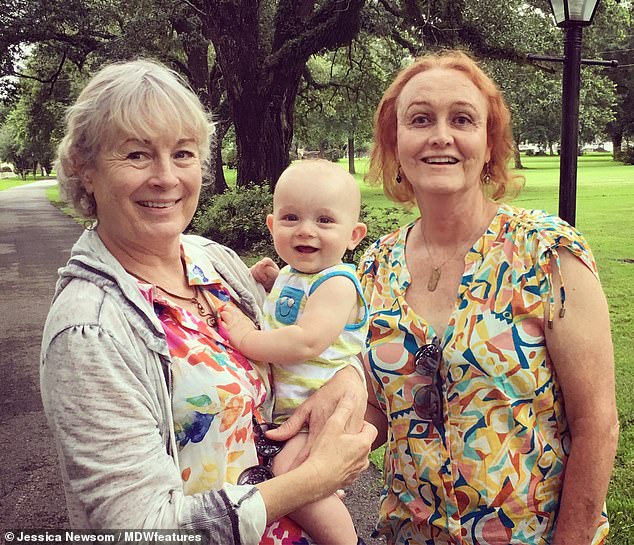 Julie (far right, with Clark and her ex-wife Lori, left) described how her ex-wife came to accept that she was transgender very quickly

‘Going out in public is different than being at home because she is trying harder to make her voice softer and seems slightly nervous sometimes about her mannerisms.’

Jessica, who now has a two-year-old son, Clark, added: ‘I gave her immediate love and acceptance to live the life that made her happy. In the beginning she would dress in drag on weekends and I would go out with her occasionally to watch her lip sync at drag nights.

‘At home she just seems like the same person to me and we have a lot of fun talking about music, TV, and politics.

‘Watching her perform was a strange mix because I have always seen my dad dance and sing just like that, but not in high heels.

‘Julie and I still get along great. We try to see each other once or twice a year, now even more so that she’s a grandma.’

The Bachelorette, A&E's Chris Farley doc, The Hot Zone: What to Watch on Monday