BBC podcast presenter with incurable cancer Deborah James, 39, says she wishes she ‘had a future’ and has to accept she ‘probably won’t’ see her son, 13, celebrate his 18th birthday

BBC podcast presenter Deborah James has poignantly revealed that ‘all she wants is a future’, as she launched a new campaign to mark Bowel Cancer Awareness month.

The broadcaster and mother-of-two, 39, who’s also known as Bowel Babe, has been living with stage four bowel cancer since she was diagnosed in December 2015.

Speaking on Lorraine This Morning, London-based Deborah launched ITV’s  Lorraine’s ‘No Butts’ campaign, designed to get people talking about the illness’s main symptoms.

Speaking with Dr Hilary, the campaigner stressed that people had more chances of recovering from bowel cancer if it’s caught early, and said people need to avoid embarassment about talkig about symptoms.

Deborah, who presents the Radio 5 Live podcast ‘You, me and the Big C’, spoke candidly about her future on today’s show, saying that she’s had to accept she probably won’t see her children, aged 11 and 13, turn 18. 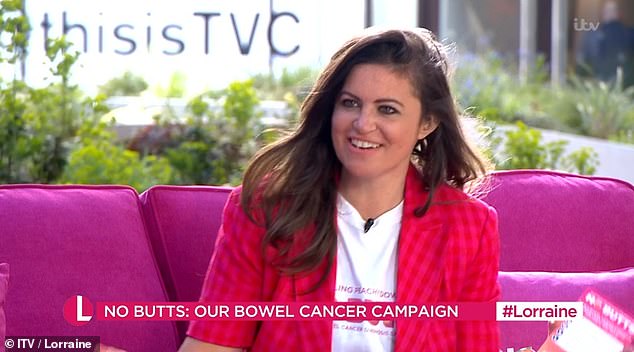 ‘I was diagnosed art the age of 35, with stage four bowel cancer.

‘It was the last thing I thought would ever happen. It was caught very late and unfortunately, the chances of survival plummets.

‘It’s really hard when I look at my kids. I have a 13-year-old and an 11-year-old and I wonder if I’ll ever see them getting to 18 and I probably won’t

‘All I want is to have a future and dream about a future. I want to make it to my 40th birthday later in the year, I want to have a huge party. 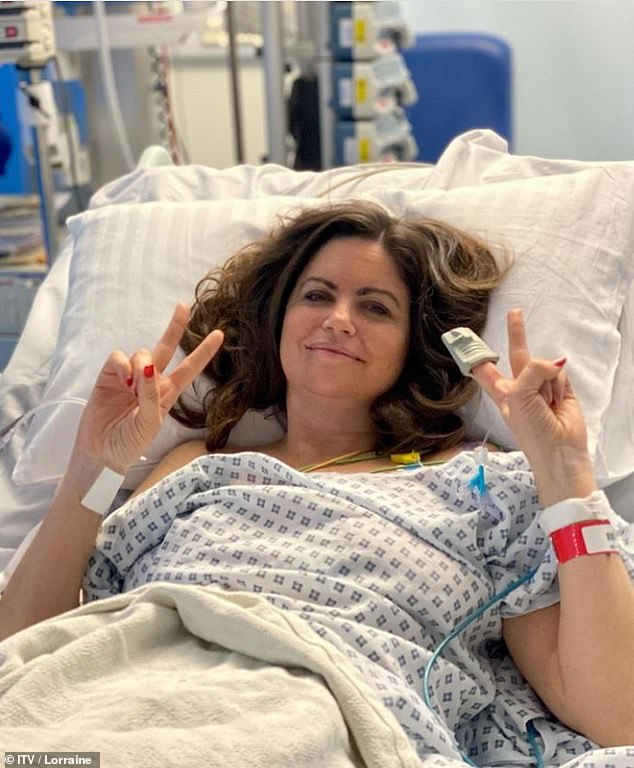 Deborah said being diagnosed late made her chances of surviving cancer lower, and said she didn’t think she would make it to see her children aged 13 and 11 turn 18 (pictured in hospital in 2020)

‘Living with cancer mentally is a roller coaster, physically is very challenging. Covid has a level of complexity and worry.

‘The hardest thing was when I’ve been in  hospital over the last year. I’ve had to have radiotherapy, treatment every week, but I’ve done it all alone.

‘When bowel cancer is caught earlier, it is survivable,  but we need people to talk about it,’ she said.

‘We need people to talk about it, we need people not to feel embarrassed, because ultimately, that’s how we save lives,’ Deborah said in a clip explaining the campaign. 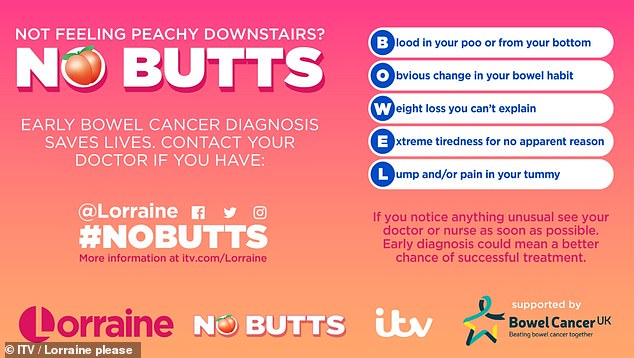 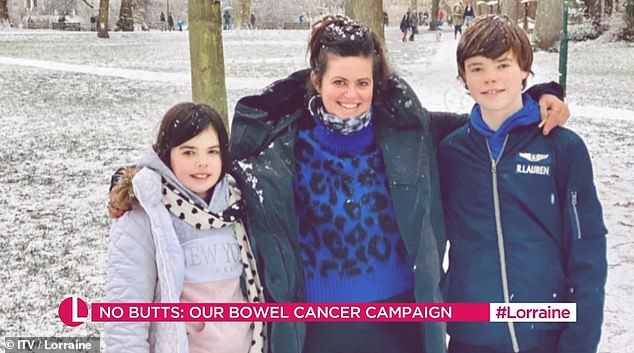 Deborah said she didn’t think she would be able to see her son and daughter turn 18, due to her illness

‘The reason “No Butts” is so important is because we want to smash the poo taboo, I mean let’s face it, even your favourite actor poos,’ she joked.

‘It’s all about getting bums on seat to smash the poo taboo,’ Deborah told Lorraine.

‘There should be no embarrassment when talking about our bowel health, and ultimately, by doing it, we want to save lives, because unfortunately,  bowel cancer is the second cancer killer in the UK, and it’s about time for it to change,’ she added.

‘All on the Board, from our amazing TFL, have made a board for us in London this morning,’ she explained.

‘We’re going to be taking this pink sofa all over the country, and actually tomorrow, I’m in Sunderland at the Stadium of Light, where we’ll be talking “No Butts”,’ she added. 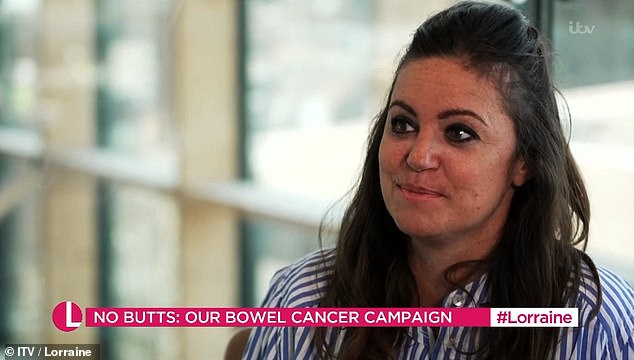 The campaigner stressed that bowel cancer is curable if detected early, and said she wanted people not to be embarrassed about talking about their poo

Viewers got behind the campaign and said they were rooting for Deborah, who is still undergoing treatment, to get better

‘We want everyone to become their own doctors in a way by learning these very simple main symptoms because 60,000 lose their lives every year to bowel cancer,’ Dr Hilary said.

‘We can prevent a lot of those if only people knew to look at their poo and report symptoms,’ Dr Hilary said.

As part of the campaign, ITV have created a leaflet highlighting bowel cancer’s main symptoms.

The TV doctor went through the main symptoms, which spell out ‘BOWEL.’

‘I know GPs say they are open for business but some people say they haven’t been able tog et an appointment,’ Hilary added, ‘you can and you must, make your appointment whether it’s video online or whatever, do a blood test,’ he added.

‘There’s nothing to fear, it could save your life,’ he added.

Deborah, who was diagnosed at a later stage and said she didn’t want it to happen to other people  .

Reflecting on her own symptoms, she said: I was really tired, but of course I was tired, I was a busy working mother-of-two,’ she said. 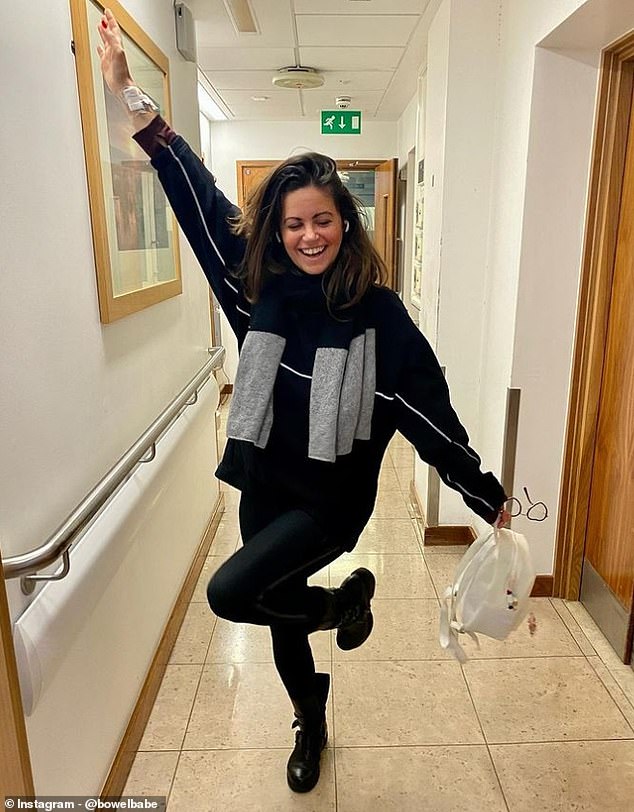 Campaigner, broadcaster and author Deborah James, 38, said protecting cancer care should be a priority (pictured upon leaving hospital after going through an operation to treat her stage four metastatic bowel cancer)

‘The key thing is when it’s caught early, it’s curable,’ she added.

‘The earlier it’s caught, the better the chances of survival, I’m very grateful to be alive, but I don’ want that to happen to anybody else

This Morning viewers were touched by Deborah’s story and applauded her campaigning effort.

Deborah, who was told she had an eight per cent chance of living longer than five years after her diagnosis, said cancer referrals had dropped dramatically in the wake of Covid. 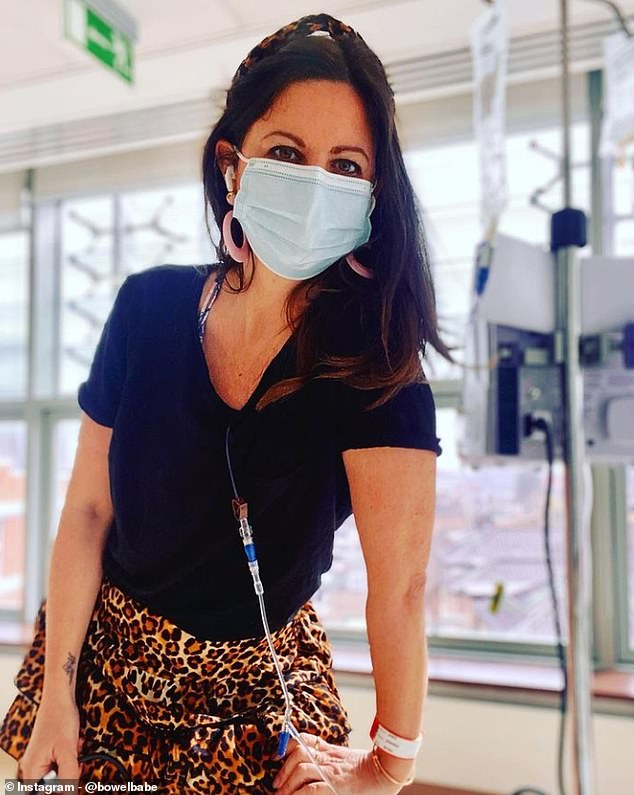 The mother-of-two talks about her cancer on Instagram under her moniker Bowel Babe, and shares glimpses of her treatment (pictured during a treatment session in hospital)

She explained this is because people have not been getting their symptoms checked, which hinders chances of the cancer getting caught early.

Speaking of receiving the Pzifer covid jab on January 22, the campaigner, who has been told it ‘doesn’t change anything,’ went on to say how it has given her ‘hope’ that there’s ‘light at the end of the tunnel’ – and admitted she now feels better about the pandemic mentally.

Deborah, known as Bowel Babe, has had 17 tumours in her lifetime and was told in January she was cancer-free.

However, she said doctors discovered news signs of her bowel cancer which required surgery and she underwent an operation in December – but is now feeling much better.

Bowel, or colorectal, cancer affects the large bowel, which is made up of the colon and rectum.

Most cases have no clear cause, however, people are more at risk if they:

More than nine out of 10 people with stage one bowel cancer survive five years or more after their diagnosis.

This drops significantly if it is diagnosed in later stages.

According to Bowel Cancer UK figures, more than 41,200 people are diagnosed with bowel cancer every year in the UK.

It affects around 40 per 100,000 adults per year in the US, according to the National Cancer Institute.

The most controversial shows of 2018 so far