Why it took a self-pitying £45k globe-trotting spending spree to teach me divorce is NOT freedom: A liberated, hedonistic lifestyle where domestic concerns cease to exist sounds ideal… but I was desperately unhappy, writes GILLY DA SILVA

Shopping trips would begin with me snapping up designer Mulberry handbags like I was choosing vegetables for dinner — and conclude with me staggering home, weighed down by bags filled with Agent Provocateur lingerie.

There were endless holidays, too, to exotic locations from Los Angeles to Mykonos, where I’d dance into the small hours. And, I confess, there were also flings with gorgeous men half my age.

This may sound like a dream existence to some — a liberated, hedonistic lifestyle where domestic concerns and workplace stresses cease to exist. What woman wouldn’t want to live permanently in such a manner?

Well, me for one. Because the truth behind this glamorous facade was that I was actually desperately unhappy — grief-stricken after the end of my 20-year marriage. 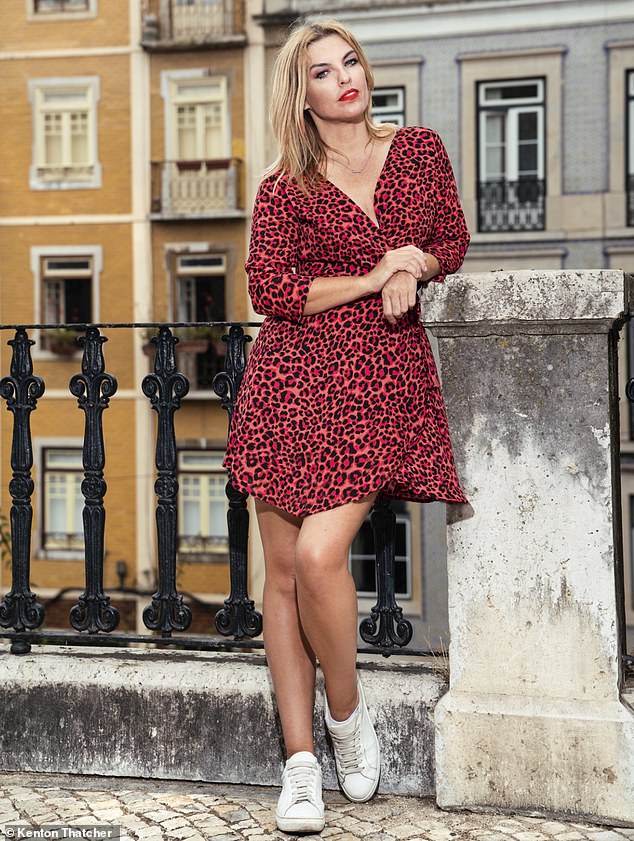 Gilly Da Silva: There were endless holidays, too, to exotic locations from Los Angeles to Mykonos, where I’d dance into the small hours. And, I confess, there were also flings with gorgeous men half my age

My husband, Rui, was a famous DJ. He lived precisely the kind of life you might imagine a superstar DJ to live, jetting off around the world at the drop of a hat, attending parties galore.

People assumed that was the life I was living, too, but after two decades and two children together, at 46, I was more constrained by the school run and managing my own property company.

Looking back, the end was perhaps inevitable. Yet when it came, it poleaxed me.

Immediately after our marriage ended in June 2018 — I told Rui to leave after it became apparent any trust between us had died — I dissolved into despair. I wept constantly, once for six hours non-stop, keening, rather like you see Middle Eastern women do at funerals.

Because make no mistake, I was grieving. For the love I had lost, for the emotional contentment that my once-happy marriage had brought me.

But I did not know how to channel that grief. So I buried it, and embarked upon a period of decadence and debauchery, hoping it would make me happy.

Looking back, I realise such indulgence was never going to heal my wounds, but I suppose I thought that if my ex was able to do what he wanted, why couldn’t I? After bringing up our two beautiful children and building a happy home, didn’t I deserve some fun, too?

I also believe I had mistakenly fallen into following the relatively new-found belief that divorce in some way represents ‘freedom’ for women.

There are celebratory divorce parties, jokes about midlife post-divorce flings and even divorce congratulation cards.

One such card I saw recently read: ‘Divorce: Finally inhaling the sweet sweet smell of freedom. Often followed by the uncontrollable urge to jump, face first, into a whole new life of good times . . .’

It’s this sort of messaging that led me to embark on what I now realise was a truly reckless adventure.

In nine months, I spent around £15,000 on designer clothes and £30,000 on foreign jaunts, in the pursuit of what I thought was ‘fun’, when true contentment was what I had left behind in my marriage.

Far from rejuvenating me, I’d never been more miserable. I awoke crying every morning — and not only because of the hefty debts building up on my American Express card. 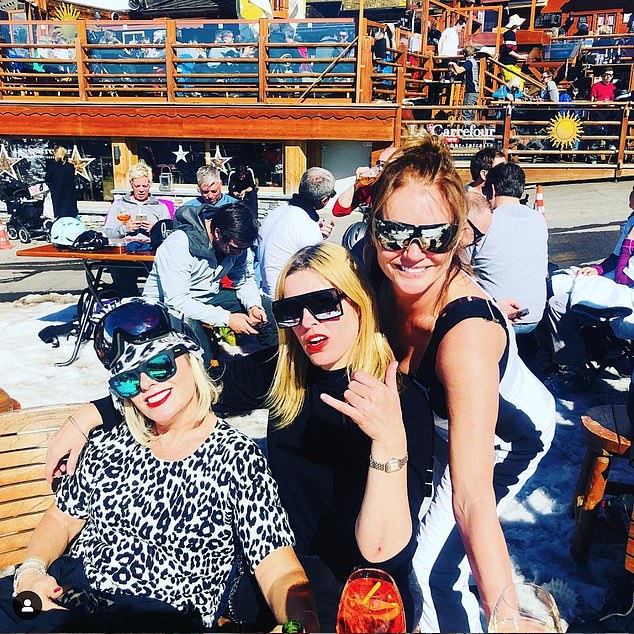 Gilly and friends in Verbier, March 2019.  I finally snapped out of it last March when I returned home from Prince Andrew’s favourite winter haunt, the Swiss ski resort Verbier

The problems I was running away from were impossible to escape. I eventually realised I needed help, not the high life, to recover from my divorce grief.

Of course, my life with Rui hadn’t started out this way.

We had met when I was in my 20s. After leaving my all girls’ school in Ealing, West London, I had taken a job in a bar in Lisbon, Portugal. I wanted to see the world.

There, back in 1998, I met my future husband, then a little-known musician. Not long afterwards, we set up home together in London and started our own record label.

Our fourth release went straight to number one and, from then on, the phone would not stop ringing — everyone from Jennifer Lopez to Kylie wanted to work with us.

Rui and I married in front of 30 guests in Las Vegas in 2000 and everything about the wedding — from the fake Elvis to celebrating into the early hours — was rock and roll.

Life was one big party. Our weekends often started on Thursday night and finished on Monday morning.

My husband was at the peak of his career by then and being asked to work all over the world. We went from living off my £30-a-night tips in a cocktail bar to travelling first class and drinking champagne.

More importantly, we were so in love. I considered Rui to be my soulmate and with us working together — I managed the business — life seemed good.

Things changed, however, when we had children. Our son, now 19, was born in 2001 and our daughter followed two years later. I could no longer travel all over the world at the drop of a hat. 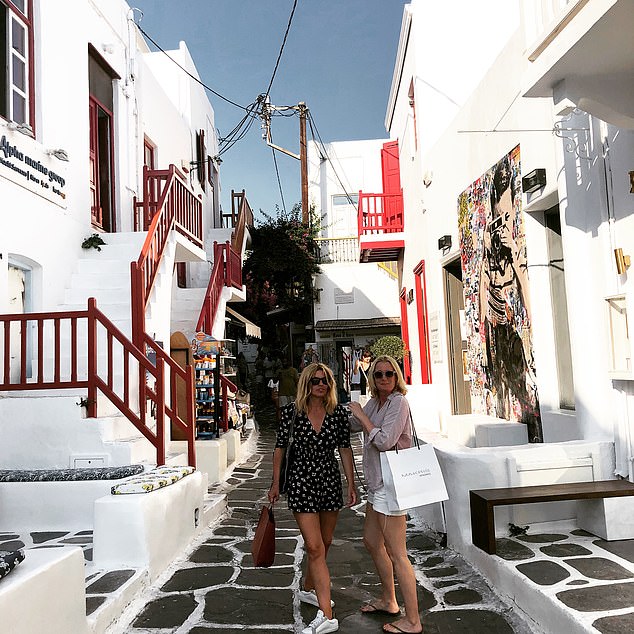 Gilly and Libby shop in Mykonos, July 2018. Mykonos is a mecca for celebrities and we spent our time at exclusive beach clubs. This trip alone cost me £9,000, but that was far from the end of my splurge

I was a mother now, and our children had to come first. And I was happy — a different sort of happy.

Yet, my husband seemed to cling onto our old lifestyle. Despite being four years older than me, he was still as sociable as ever, while I was at home dealing with work pressures and the children.

The arguments were inevitable. Any woman would been jealous and frustrated.

Then, around 2010, his career started to wane as new acts took over and selling records became less profitable because of streaming apps such as Spotify.

I lost interest in managing the record label and found I could make more money buying properties and renting them out on Airbnb.

The cracks between us became a chasm. By December 2017, I had a strong feeling something was not right with our relationship. I buried my worries, and continued to look to the future, buying us a second home in Lisbon.

But there was no escaping the fact our marriage was collapsing.

I tried to make it work, but we were arguing a lot, something which was unpleasant for the children, who were then 16 and 14.

Eventually, I snapped and told him to pack his bags. The date is for ever engrained in my mind: June 21, 2018.

It is a curious feeling, being married for 20 years then suddenly finding yourself single. 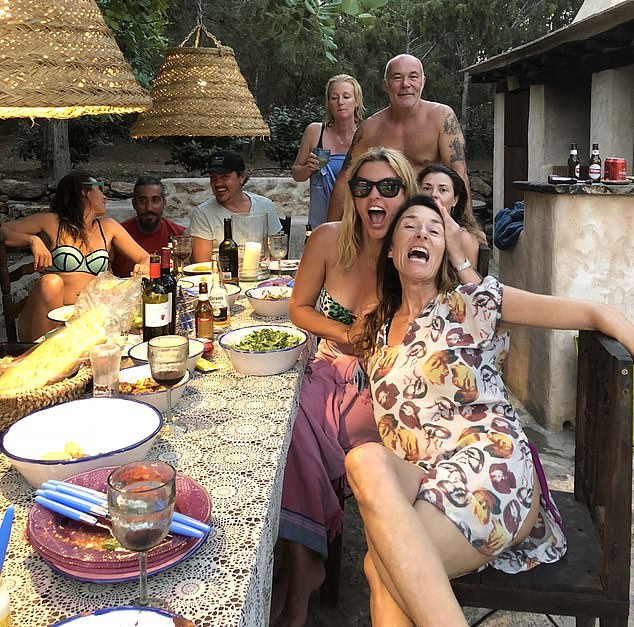 Gilly and friends at a private villa in Ibiza, August 2018. From Mykonos, the three of us flew straight to Ibiza. And back in London that summer, the Bacchanalia continued

I still thought like a married mother-of-two, yet felt this pressure to behave differently. What was the point of unravelling my life if I still behaved as though I was part of a couple?

There is no template for this next, important step when you walk away from a marriage. It is too easy to get it wrong.

And I did. Days later I jetted off, with my teenage daughter, first to Crete, then to Mykonos to meet up with one of my best friends, Libby.

Mykonos is a mecca for celebrities and we spent our time at exclusive beach clubs. This trip alone cost me £9,000, but that was far from the end of my splurge.

From Mykonos, the three of us flew straight to Ibiza. And back in London that summer, the Bacchanalia continued.

I had two short relationships with men in their mid-20s.

I kept telling myself I was having fun. That I ‘deserved’ this . . . but deep down, it felt hollow and meaningless. I urged myself to ignore the ‘killjoy’ in my head, but each encounter just reinforced those feelings.

I craved routine, normality, the mundane day-to-day life of a family, but I forced myself to forge ahead, convinced that true happiness was just around the corner.

By September, I was clearly suffering from anxiety and depression caused by the end of my marriage, but my feet would not stop itching.

I returned to Ibiza to relax with a friend, then in October flew to New York for five days, where I stayed in a five-star hotel and flitted around designer stores.

I had so many holidays in this period that I lost count — among them, jetting back and forth to my second home in Lisbon, popping down to Seville in Spain for a few days, as well as flying business class to Winnipeg in Canada for Halloween.

Selfridges became my second home. Anything that caught my eye was justified as a divorce present. I bought a £1,300 pair of Christian Louboutin boots and blew £1,000 on Agent Provocateur and Myla lingerie. 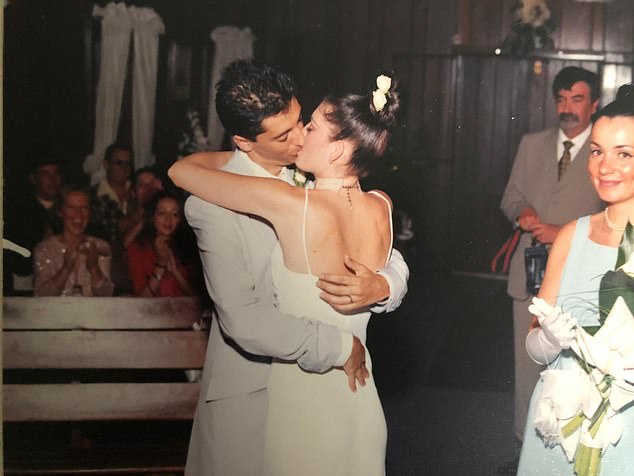 Yves Saint Laurent sunglasses, Sandro and Maje trousers, Zadig & Voltaire trainers and Stella McCartney handbags were among the goodies in my haul.

This was my time, I told myself — my treat. After all, I’d never spent money on myself like that before.

When I was married, the family had always come first. Now, if you added on the £140 a week I was spending on gym membership, the exercise classes and personal trainers, plus the £500 a month invested at the hair salon and getting pedicures and manicures, my outgoings were clearly out of control.

I finally snapped out of it last March when I returned home from Prince Andrew’s favourite winter haunt, the Swiss ski resort Verbier.

I couldn’t keep running away from my grief any more. I was sobbing, overweight, riddled with anxiety and around £15,000 in debt.

Finally, I allowed myself to acknowledge that I was missing my husband. I’d been with him for 20 years and, while I didn’t want him back, I missed what we had had together.

I had been catapulted into a new life: I was in my late 40s and I was scared. I didn’t know what was out there for me, or if I would ever meet someone again. It was a terrifying time. . .

Long overdue, I booked myself in for therapy, and after half a dozen sessions I was finally able to stop crying. Now I feel really happy again and have a new boyfriend whom I’ve been seeing for eight months.

I have come to realise you can get a second chance in life — if you acknowledge your emotions, rather than burying them.

With that in mind, I’m setting up a grieving retreat for those devastated by divorce. There is next to nothing out there for people struggling with divorce.

My retreat —which is also for those grieving after the death of a loved one — offers divorce coaches, life coaches and group meditation to help clear negative thoughts.

Both men and women are welcome, and I certainly don’t see it as being a misery hotel. There will be cheese and wine tasting, lots of fun and laughter, too.

I am hoping people will come away from it with new friends and maybe even a future spouse. I want to help people see that there can be life after a divorce.

Looking back, I realise I would have been better off spending my money on therapy rather than luxury holidays and fancy clothes.

Yes, it was fun in the short term — but it certainly did not heal my wounds. After a relationship ends, there is so much hurt to confront and deal with.

Running away is not the answer.

What will Meghan Markle and Prince Harry’s Royal baby be named? Latest odds and predictions