Mother who gained 11 stone so her body was in proportion with her 30-INCH thighs undergoes surgery costing £20,000 – with doctors draining 22 LITRES of fat from her legs

A mother who was struck down with a condition that made her legs swell to giant sizes has revealed how it forced her to gain 11 stone before doctors finally returned her to normal.

Vicki Hull, 31, from Southampton, noticed her leg was growing from the age of 16 but it wasn’t until five years later that she was diagnosed with lipoedema – a condition that causes fat to be distributed in an irregular way beneath the skin.

The former carer gained 11st in weight in an attempt to make her 30-inch thighs – which weighed a combined eight stone – look in proportion to the rest of her slim body.

However, Ms Hull eventually managed to raise enough money to undergo a life-changing liposuction operation which saw 22 litres of fat drained from her legs. 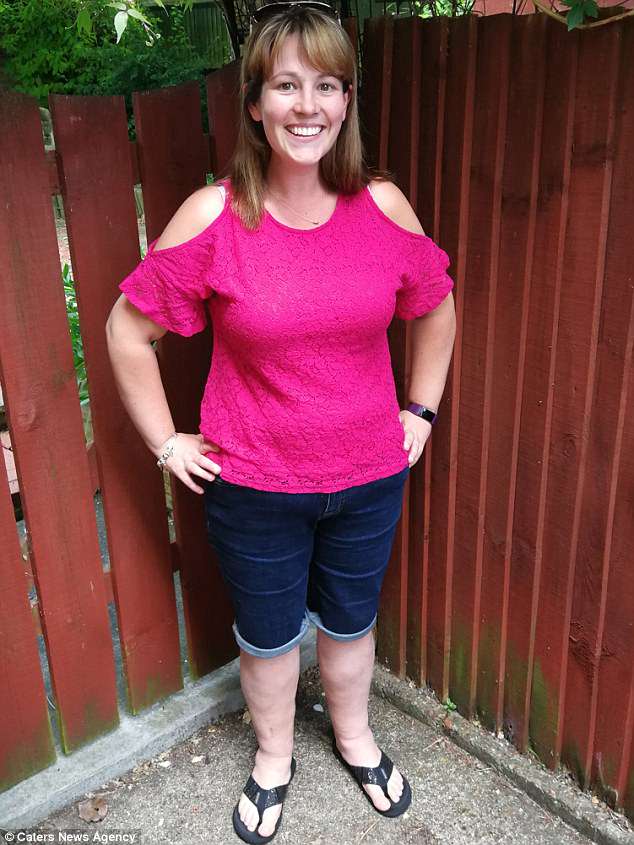 Vicki Hull, 31 from Southampton, pictured now, suffered from a chronic condition called lipoedema – which causes fat to be distributed in an irregular way beneath the skin

Living off a diet of takeaways and high calorie snacks, she hated her size 26 frame but with no treatment available, her legs continued to grow.

But after fundraising for liposuction, Ms Hull collected £20,000 and has dropped the weight, with 22 litres of fat drained from her legs and arms.

Her last surgery, which was two months ago, removed the excess skin on her legs and the final operation will take place next year.

Ms Hull, who once weighed 22st, said she now feels amazing in her new 11st frame. 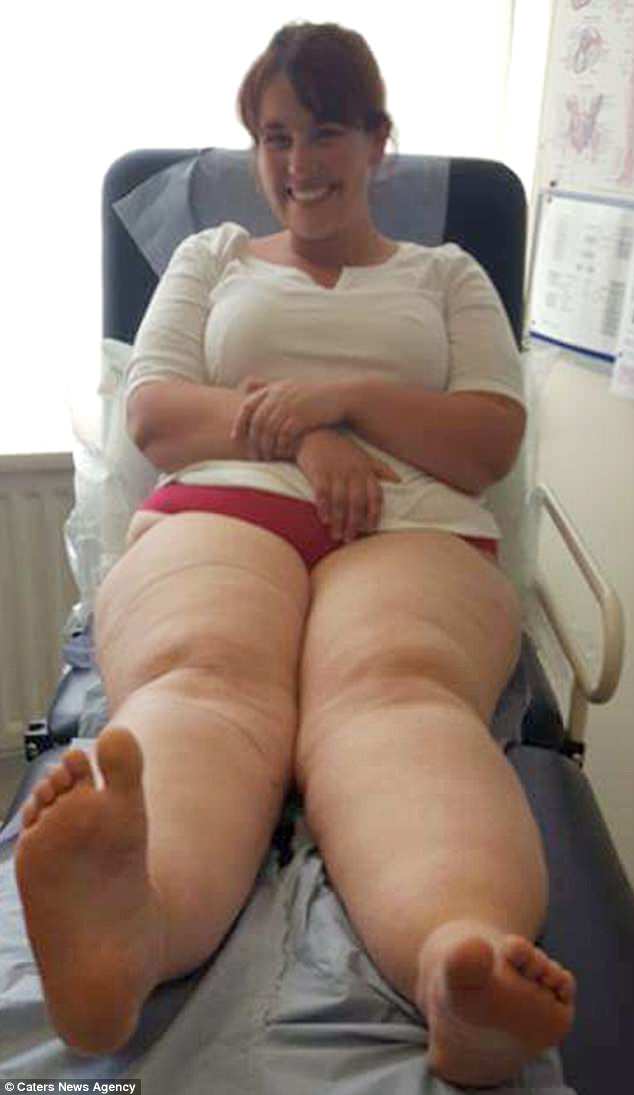 The rest of Ms Hull’s frame is small, causing her to put on 11 stone in an attempt to make her body look more in proportion. Pictured in hospital before her operations 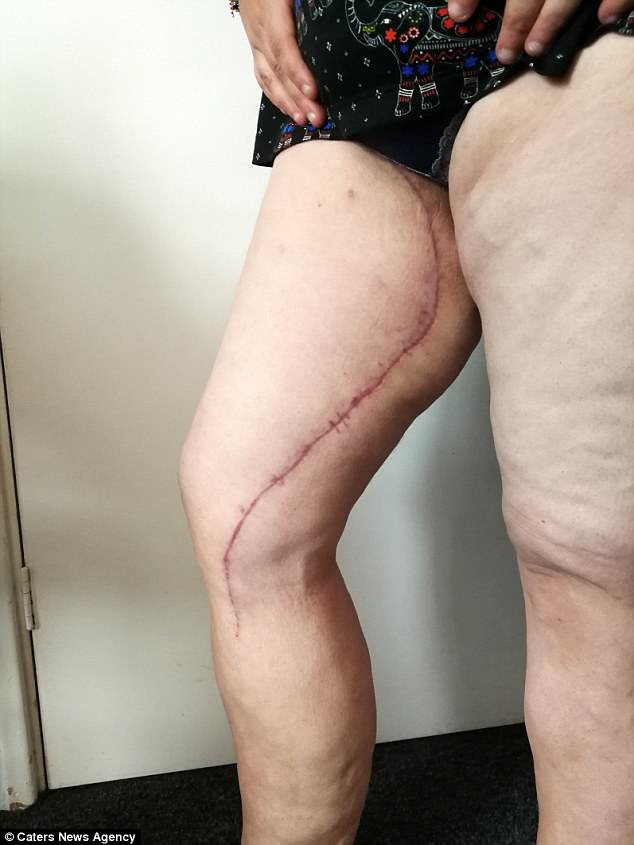 The mother and former carer raised £20,000 for liposuction and has since dropped the weight she had to put on. Pictured, her scar after liposuction

She said: ‘My legs were huge compared to the rest of body and when exercise failed to help shift the weight I decided to gain weight so I looked in proportion.

‘I would binge eat most days in the hope I’d pile on as much weight as possible so I’d look normal, I was so depressed. 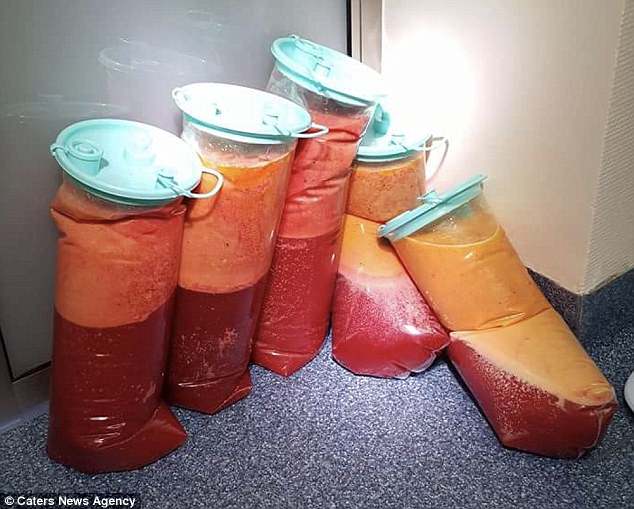 The 22 litres of fat that doctors  drained from Ms Hull, in an operation which removed the excess skin on her legs 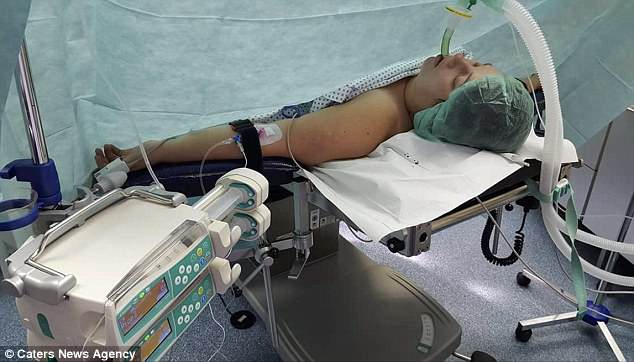 ‘But once the pain started and I was diagnosed properly I began fundraising for liposuction as this was my only option.

‘I needed £20,000 but by last January I had enough funds for my first surgery on my lower legs.

‘I contracted a skin infection afterwards so my next operation wasn’t until June when I had the tops of my legs, my inner legs and arms done too. 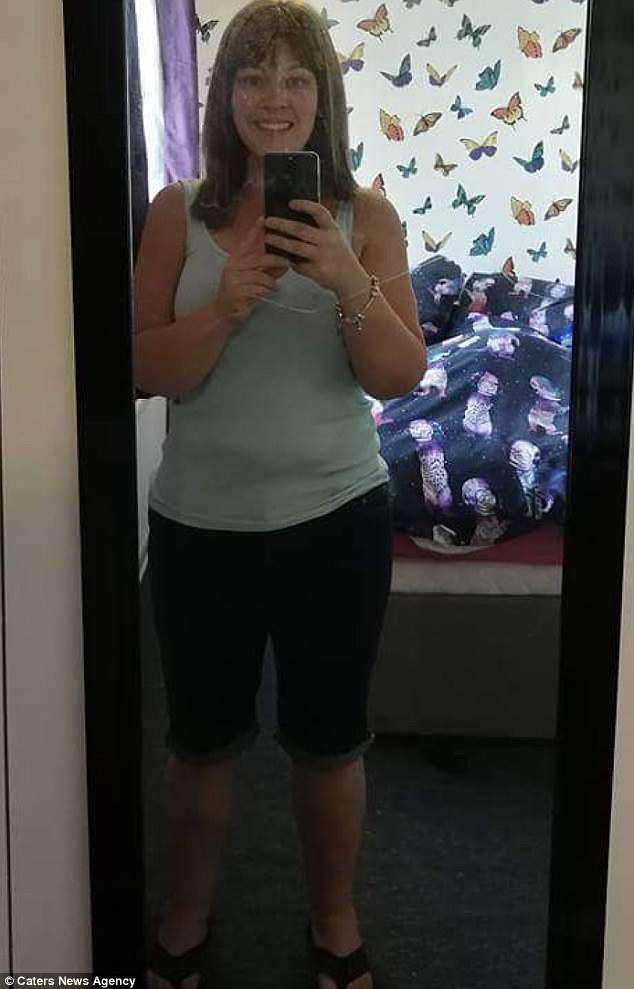 The mother, who once weighed 22st, said she now feels amazing in her new 11st frame (pictured) 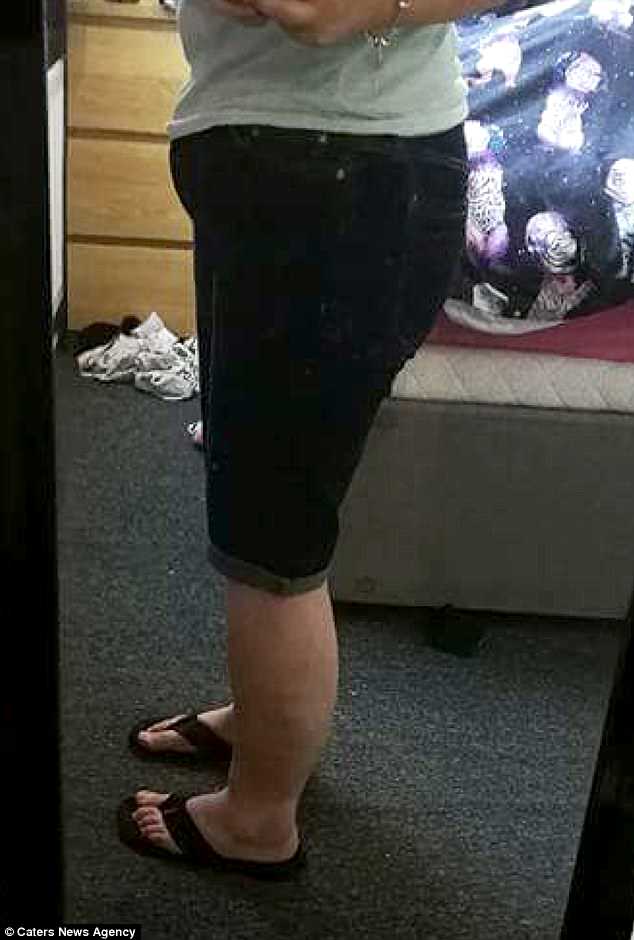 Vicki, pictured after, said: ‘I finally feel happy in my own body and I’m so relieved the surgery has been a success’

‘The liposuction was a water based one which prevented the surgery from damaging my limbs.

Lipoedema is a chronic condition typically affecting the legs and thighs.

The build up of fat is not caused through obesity, and diet and exercise have little impact on the condition.

Research suggests it is caused by hormonal changes such as those coming at pregnancy or puberty.

It is typically treated through liposuction.

‘In December I had liposuction on my legs again to ensure no fat deposits were left behind and in April this year I had the skin removed.

‘I finally feel happy in my own body and I’m so relieved the surgery has been a success.’

Ms Hull – who is now a dress size 12 – is hoping to have further liposuction on her stomach later this year once she has saved more money.

She added: ‘My transformation won’t be complete until my stomach is done but I still feel fantastic now.

‘My stomach skin needs removing as when I lost 11st my skin didn’t retract back.

‘I will have scars on my legs and arms but that’s a small price to pay to not be in pain and to have my mobility back. 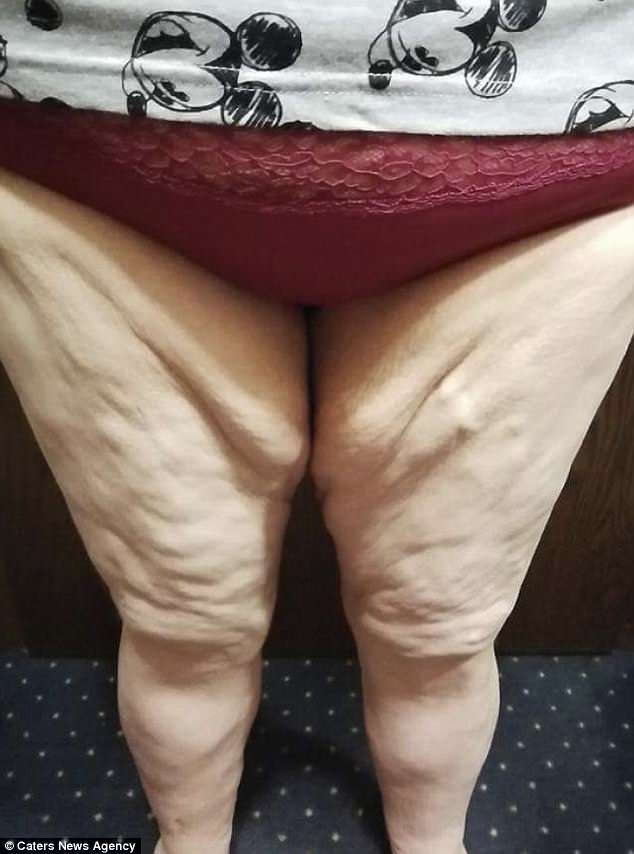 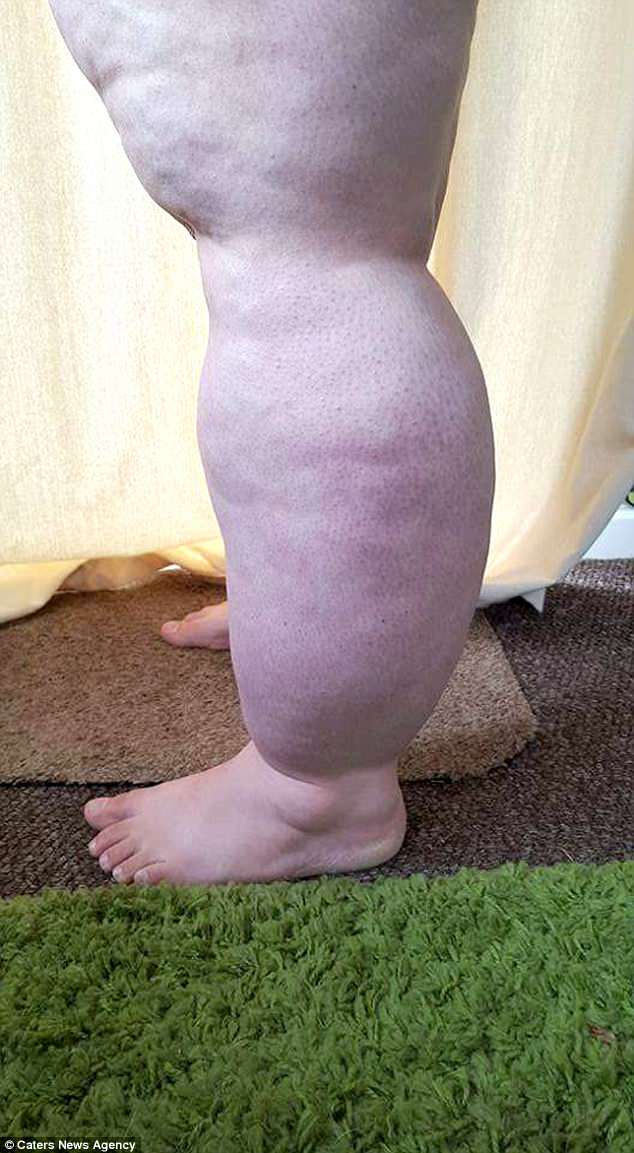 Speaking about her legs, pictured before, Vicki said: ‘My thighs were 30 inches wide and I was wearing a dress size 22 in my early 20s’

‘I don’t recognise my legs when I see them in a reflection, it’s an amazing feeling.

‘Even though there’s no known cure for lipoedema I’m thankful that I could have years of living pain free. 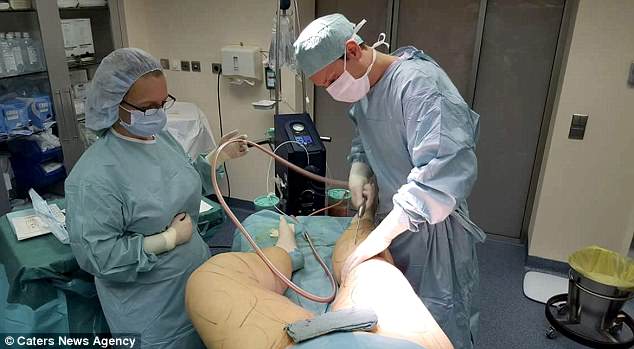 Her legs started to cause her pain and she was properly diagnosed, leading her to start fundraising for liposuction. Pictured during an operation 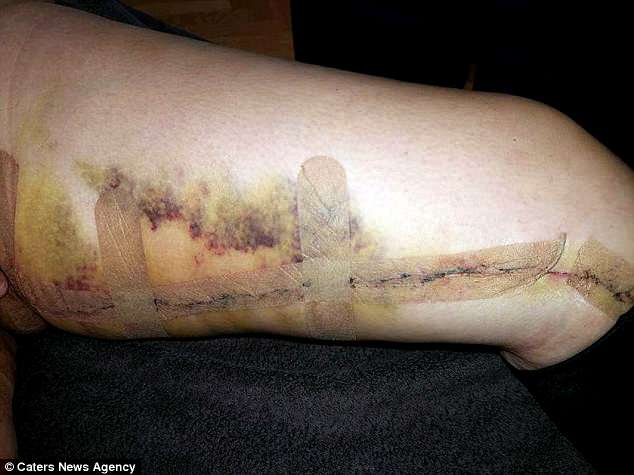 After an initial operation in January, Ms Hull contracted a skin infection, pushing her next operation back to June. Pictured, Vicki’s leg after a procedure

‘I used to be taunted by strangers who assumed I was just obese and greedy but I hope my story shows people not to judge someone by their appearance.

‘I had no control over the size of my legs but now I have a new lease of life.

‘My lipoedema was so severe it was almost stage four, which is the worst stage, but look at me now, I’m living my life to its fullest.’ 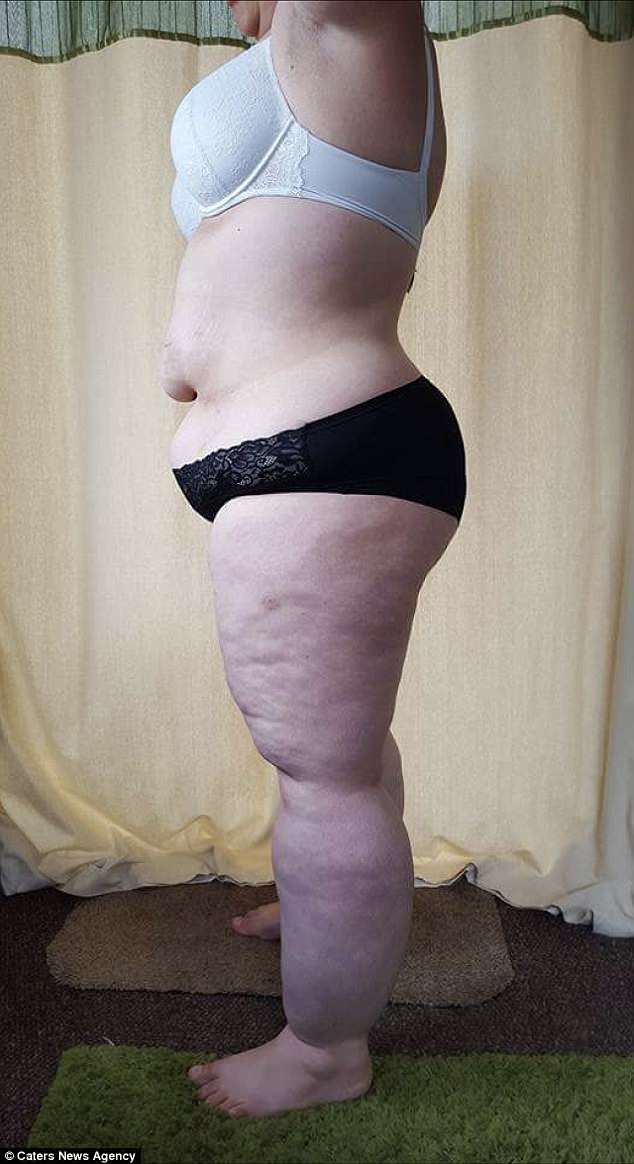 Vicki, pictured before, said that she will have a procedure on her stomach as the skin there needs to be removed because her skin didn’t retract back 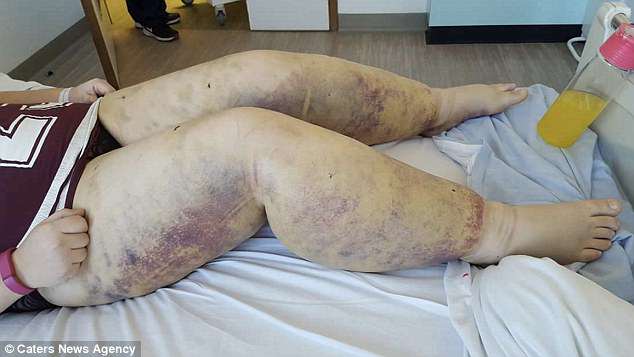 Vicki said that her operation, pictured after, left her feeling more confident: ‘I don’t recognise my legs when I see them in a reflection, it’s an amazing feeling’ 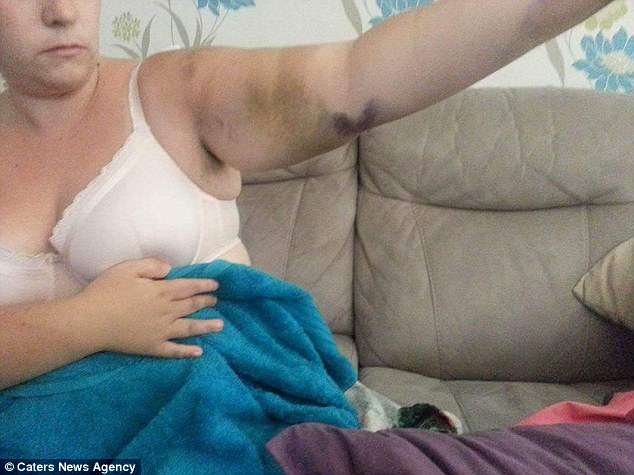 How a Cameron Crowe Story About Elvis Turned Into 'Almost Famous'

Tracy Morgan hands out more than 1,200 turkeys in New York for Thanksgiving