Home » Lifestyle » Drake withdraws himself from competition for 2022 Grammy Awards

Drake, the chart-topping rapper and singer, has withdrawn his name from competition in the upcoming Grammy Awards, the latest problem involving headlining talent for the embattled awards, which have struggled with the alienation of other top acts like the Weeknd and Frank Ocean.

Drake, one of the most popular and influential artists in pop music today, had two nominations for the 64th annual awards, which were announced two weeks ago. His song Way 2 Sexy, featuring Future and Young Thug, was up for best rap performance, and Certified Lover Boy – one of the biggest hits of the year – was up for best rap album. He was not nominated in any of the top categories, like album, record or song of the year. 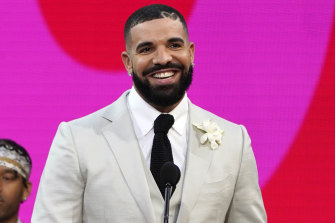 Drake has officially withdrawn his two nominations for Grammys this year, having taken issue with the awards ceremony in previous years. Credit:AP

But Drake and his managers recently asked that his name be removed from the two rap categories, and the Recording Academy, the organisation behind the awards, honoured the request, according to representatives for the rapper.

The Recording Academy had no comment, but a page on the Grammys’ official website, listing changes to the nominations, was updated Monday, noting the removal of Drake’s two citations.

The news was first reported by Variety.

Drake’s withdrawal, which emerged just as the final voting period for the awards was opening, is the latest complication for the Grammys. The academy has struggled for years to prevent an exodus among major artists of colour, who have made a litany of complaints against the awards, including a poor record of wins for black artists in the most prestigious categories, as well as a wider failure by the academy and its voters to recognise and appreciate the cultural heft and intricacies of contemporary black music.

The Recording Academy has also taken steps in recent years to attract a younger and more diverse voting pool and to prove to the music industry that its processes are fair and transparent.

But already this year, the awards have been dogged by questions about what has happened behind the scenes. The day before the nominations were announced last month, the academy’s board approved a last-minute plan to expand the ballot in the top four categories to 10 slots, from eight. Comparing the final ballot to an early version of its nominations list, which circulated throughout the industry, showed that the beneficiaries included Taylor Swift, Kanye West, ABBA and Lil Nas X.

Drake has been nominated for 49 Grammys in his career – counting the two nods he got this year – and has taken home four. But he has long expressed ambivalence about the awards, even after winning, and has often decided not to attend the ceremony even when he has been widely nominated.

After his streaming smash Hotline Bling won best rap song and best rap/sung performance in 2017, Drake questioned his genre categorisation in a radio interview. “Hotline Bling is not a rap song,” he said at the time. “Maybe because I’ve rapped in the past or because I’m black, I can’t figure out why.” He added of the awards, “I don’t even want them, because it just feels weird.”

In 2019, when Drake and Kendrick Lamar were the two most-nominated artists, each declined invitations to perform on the show. Drake did appear onstage to accept the best rap song award for God’s Plan, but seemed to allude in his speech to the Grammys’ fraught history in recognising hip-hop – a rocky relationship that dated back to the first-ever rap award in 1989, when some artists boycotted the show because the category was not going to be televised.

“This is a business where sometimes it’s up to a bunch of people that might not understand what a mixed-race kid from Canada has to say or a fly Spanish girl from New York, or a brother from Houston,” Drake said. “But the point is, you’ve already won if you have people who are singing your songs word for word – you don’t need this right here,” he added, holding up the Grammy.

But as Drake started to continue speaking, the Grammys cut to commercial. Drake later called his words “too raw for TV.” A representative for the show said that producers had mistaken a pause in Drake’s speech for the end.

Earlier this year, before the 63rd annual show, the Weeknd, who had been shut out of the nominations despite his album, After Hours, being one of the biggest hits of 2020, declared that he would boycott the awards in the future to protest its use of anonymous nominations review committees. Those were blue-ribbon industry panels that sorted through voters’ first-round nomination picks and settled on a final ballot. 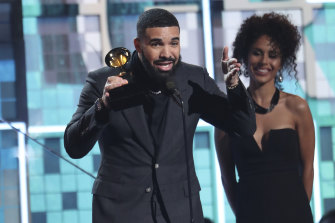 The review committees had long been a subject of intrigue in the business. A legal complaint by Deborah Dugan, who became the academy’s chief executive in 2019 – only to be ejected just five months later – said that those committees were rife with corruption and conflicts of interest. This year the Recording Academy, led by its new chief, producer Harvey Mason Jr., eliminated those committees in most categories, though the last-minute rule change has once again put a spotlight on the nominations process.

In response to the perceived snubs of the Weeknd last year, Drake wrote on Instagram that “we should stop allowing ourselves to be shocked every year by the disconnect between impactful music and these awards and just accept that what once was the highest form of recognition may no longer matter to the artists that exist now and the ones that come after.”

He added, “This is a great time for somebody to start something new that we can build up over time and pass on to the generations to come.”

The 64th annual Grammys are scheduled to be held in Los Angeles on January 31.

Jack Whitehall addresses ‘big row’ with dad Michael Whitehall: ‘That was a disaster’