Home » Lifestyle » Elvira Opens Up About 'Sort of' Coming Out, Reveals Some Friends Had 'Hard Time' Accepting It (Exclusive)

She’s been at the center of many a male fantasy over the last 40 years as Elvira, but for nearly half her time as the Mistress of the Dark, Cassandra Peterson has been in a secret relationship with another woman.

In her new memoir, “Yours Cruelly, Elvira: Memoirs of the Mistress of the Dark,” Peterson reveals for the first time publicly that she’s been in a relationship with her former trainer, Teresa Wierson, for nearly 20 years.

The two first met back in 1995, at a gym where Teresa — or “T,” as she refers to her in the book — worked as a trainer. Peterson was instantly attracted to her, but first thought she was a man. Eventually, they started training together and struck up a friendship. When Peterson’s marriage to Mark Pierson fell apart and ended in divorce, the two grew even closer — until Cassandra shocked both of them by kissing T after a night out.

The two have been together for more than 19 years now and, after calling T her assistant for ages, Peterson’s ready to live out in the open. 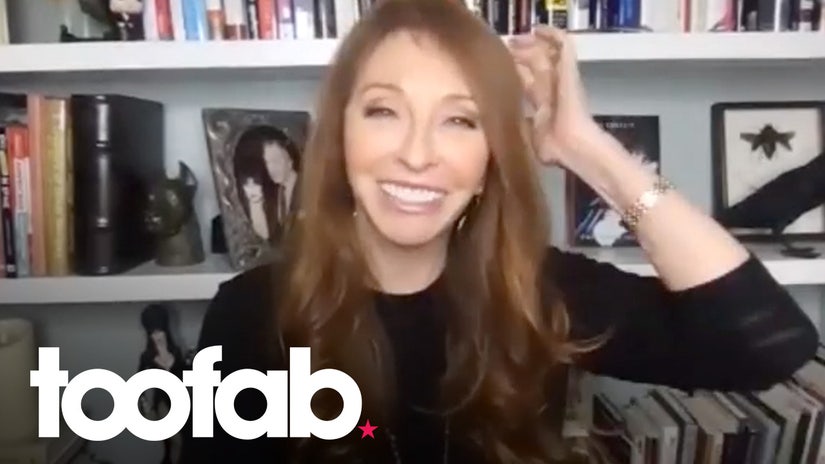 “I try to explain to people, I don’t think I’m coming out. But, on the other hand, I sort of am,” she told TooFab. “I still consider myself straight, even though I was attracted to a woman … but now there’s so many different things, you can be gender fluid, just attracted to that person.”

“I don’t think I got [to] 50 and suddenly went, ‘Hey, I’m gay. Oh, damn, why’d I wait so long?!'” she joked. “I just met a person who was a really special person and who I fell in love with. We were great friends and we fell in love. I don’t know how it happened, it just did.”

Peterson told TooFab that when she decided she wanted to reveal their relationship in her memoir, the two had a conversation about it. While they both loved the idea of not having to hide their connection anymore, they also both had hesitations. T, said Peterson, “doesn’t want to be in the spotlight,” something that can be a little hard dating someone in the public eye.

And while Peterson felt that it was “degrading” to T to keep referring to her as her assistant and not her partner in public, she was also nervous about what would happen to the character of Elvira should they be open about their personal life.

“I was protecting my character,” she told TooFab. “I’d be happy to tell anybody anything about me, as you can plainly see in my book. I was really protecting the character of Elvira.”

“Here Elvira is this big, straight, horn-dog going after guys all the time and you suddenly say, ‘Oh, the person playing her is really with a woman,'” she explained. “It seems hypocritical and weird and I was trying to save my career and my character. I didn’t know what to do. It’s my means of making a living and I didn’t want to throw that down the, you know, toilet and start over.”

Before revealing their relationship publicly, she first opened up to all her closest friends — and some of them “had a little hard time” processing the information. And it wasn’t just her straight friends that struggled, but even the many gay men with whom she’s become acquainted over the years.

“They weren’t always like, ‘Oh, that’s fabulous.’ They were more like, ‘Seriously?’ They knew that our connection was talking about men,” she told TooFab. “They’re like, ‘You’re, you’re in a relationship with a woman?” They had a hard time wrapping their head around it. Now they know, they love it and they’re all thrilled, but in the beginning it was weird.”

Peterson and ex-husband Pierson also share a daughter, 26-year-old Sadie, who, Cassandra notes, it “totally fine” with her and T’s relationship.

“You tell people about this under 30 and they go, ‘Oh … and what have you been doing lately?’ That is exactly how they react, they go, ‘Oh, cool,'” she added. “It’s people, the older you get, some of my older gay friends, they had a little bit of a struggle with it.”

“Yours Cruelly, Elvira: Memoirs of the Mistress of the Dark” is available out now.