If there’s one Hollywood couple that truly seems to have it all, it’s Emily Blunt and John Krasinski. Let’s be honest: The two are both hugely successful, ridiculously attractive, and seriously charming. So, when they hit the red carpet for the 2019 Golden Globes on Sun, Jan. 6, it’s no surprise they looked flawless and totally connected. But, what does Emily Blunt and John Krasinski’s body language at the 2019 Golden Globes actually say about them as a couple? Well, according to experts, these two don’t just look in love, they really, really are. What else is new?

Blunt and Krasinski attended the Golden Globes together, and while walking the red carpet, they posed for several photos, looking more and more stunning as the night went on. Krasinski and Blunt are the perfect example of relationship goals after having been together for ten years. When they first met in 2008, it was basically love at first sight — for Krasinski at least. Speaking to Ellen DeGeneres back in 2011, he explained how he fell so hard. "I met her and I was so nervous," Krasinski said. "I was like, ‘Oh god, I think I’m going to fall in love with her.’" And he sure did. Blunt, for her part, thinks about their first meeting with plenty of fondness too. In an exclusive interview with The Hollywood Reporter, she shied away from talking about the details of their first date, saying, "It’s so precious, I don’t want to talk about it. Is that all right?"

These two fell in love hard and fast. They’ve come so far since they first met, even starring together in A Quiet Place, one of 2018’s biggest blockbuster hits (which was directed by Krasinski, too). After the Golden Globes, I asked two body language experts to break down whether or not their red carpet body language reflected the love they seem to have.

Spoiler alert: It did.

1They’re confident in each other. 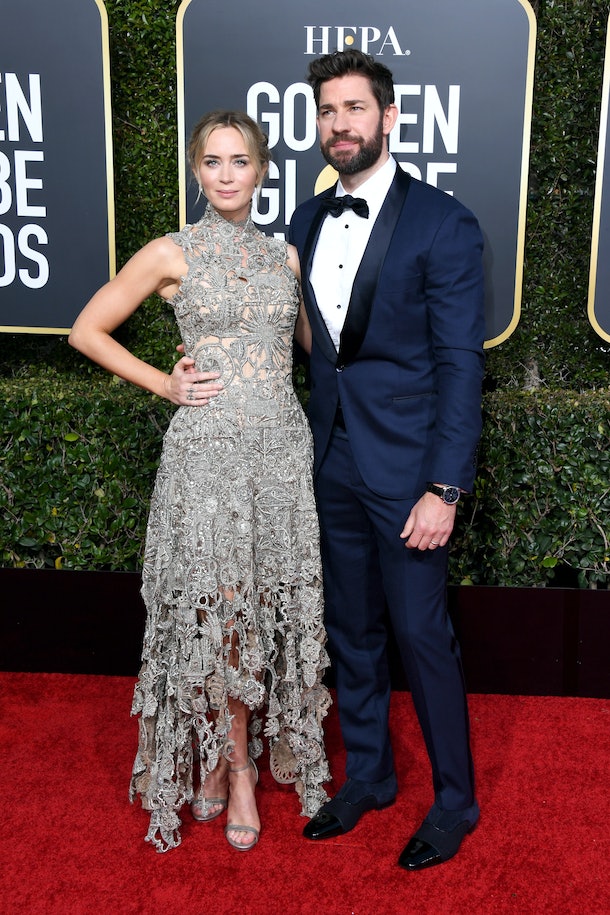 OK, clearly this photo is stunning, but body language expert Patti Wood says there’s more to it than that. "Notice how he has his feet angled toward her," she tells Elite Daily. "He does this in most of the couple photos I have seen of them showing she is his priority, where he wants to be. She is slightly under his shoulder, even while having her power elbow out position. They have this! They are a power couple!"

Additionally, they also look super connected. "These two are as tight as can be," body language expert Traci Brown, author of Persuasion Point: Body Language and Speech for Influence, tells Elite Daily. "See how his feet are pointed toward her? That’s where his energy is. And she’s slightly turned toward him and has her feet crossed to look sexy for the cameras. They’re matching each other with their closed mouth smiles so that’s good."

In short, they’re connected and happy to be together.

2They only have eyes for one another. 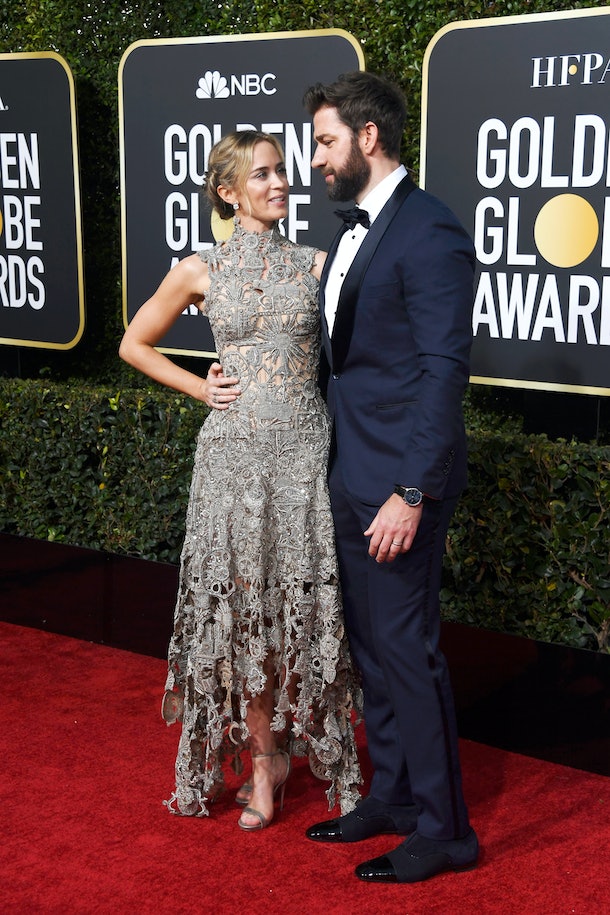 Further along the red carpet, Blunt and Krasinski took a moment to pause and look at each other, which Brown explains says a lot about their relationship. "She’s a lot more happy now that she’s fully focused on him!" she says. Maybe Blunt just wanted a moment to fully take in what a hunk her husband is. Who can blame her?

"I like the interesting juxtaposition of power," Wood says of this photo. "She has her hand on her hip to show ‘I am super women,’ but she has her arm under his and is looking at him like he is a sexy super hero too. He is looking a bit tired, but he has his arm around her confidently showing his desire to always be connected."

3They truly stand together. 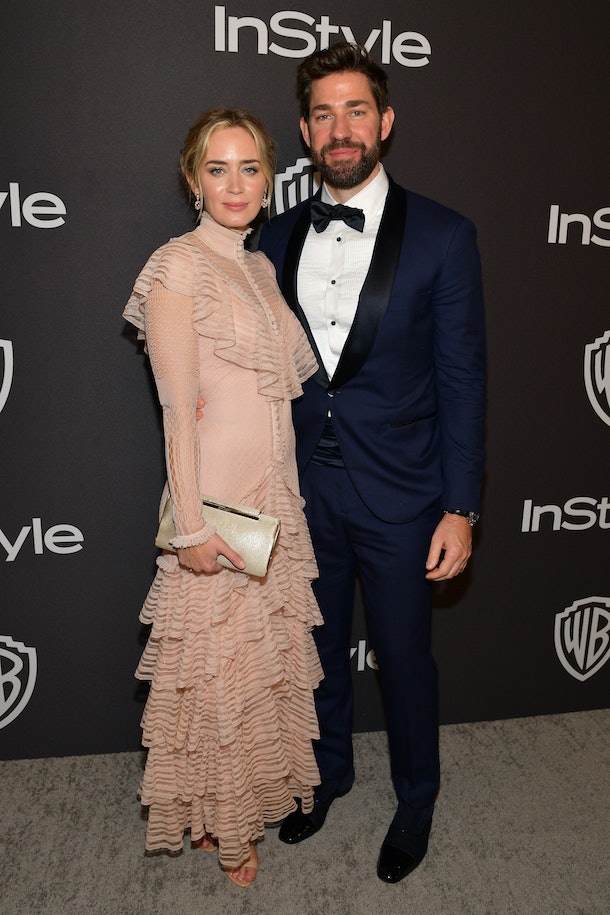 Finally, the couple attended InStyle and Warner Brothers’ 76th Annual Golden Globe Awards Post-Party, and with an outfit change, they took the cameras by storm once again. "I like how they have such a strong love-V stance with the[ir] bodies angled close and overlapping in the point of the V," Wood says. "See how her shoulder is up and under and cradled beneath his big strong shoulder, showing she feels protected? And see how he is so relaxed and comfortable with his arm around her, standing strong, with his toes pointed toward her in that protective role?"

These two stand together through it all, which Brown emphasizes. "They’re still matching with those closed mouth smiles," she says. "They look like they’re glued down the middle with how close they are."

Ugh, glued down the middle. Is that not the sweetest? Blunt and Krasinski have so much going for them, individually and together. But it really does seem as though they prioritize each other more than any red carpet appearance or little golden statue, and that tells you everything you need to know. These two were made for each other.

How Hong Kong is preparing its youth for the future

Hollywood To Trump: Get Well Soon And We Told You So

'Turning Point: 9/11 and The War On Terror' and 4 Other Shows to Stream on Netflix in September