Erika also battles Sutton — telling her, in front of everyone, “Why are you speaking to me? I have nothing to say to you, zero.”

This week on “The Real Housewives of Beverly Hills,” newcomer Kathy Hilton hoped to have a drama-free weekend with the women at the swanky Fairmont Grand Del Mar … but she didn’t quite get what she asked for.

As they all went off on a weekend getaway, Erika Jayne was also getting away from more recent developments in her estranged husband Tom Girardi’s ongoing legal and health battles. The trip coincided with conservatorship hearings Erika was not privy to, during which Tom’s brother was granted control of his personal care. 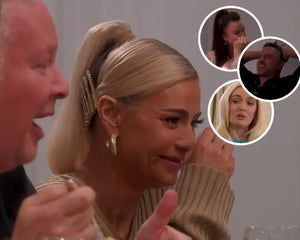 With Sutton Stracke dealing with a sprained ankle, everyone but her met up for lunch on the beach once in San Diego. This gave Erika a chance to explain her issues with Sutton, without Stracke interjecting.

“Let me just clear it up real fast. To be called a liar is not okay with me, because I’m not lying,” Erika explained. “Being called a liar is like major to me and that is something I will not tolerate.”

Throughout the season, Sutton has questioned some of Erika’s stories about Tom and pointed out how Erika initially “lied” to them about all of his alleged injuries during a car accident. When Dorit Kemsley started to press for more clarification on the incident, Erika said he “allegedly” was unconscious for 12 hours. This struck Kyle Richards as odd, as Erika was the one who told them that in the first place months prior — and didn’t use the word “allegedly” in the past.

“What does that mean? You’re the one who told us that information,” said Kyle in a confessional. “Why are you saying ‘Allegedly’? I feel like this is what happens when you’re married to a lawyer for that many years.”

Erika then explained that she didn’t want him to have surgery on his ankle at the time because he had suffered a traumatic brain injury and didn’t feel he should be put under anesthesia. “You can’t be knocked out, especially at that age,” she added. The women seemed to accept what she was saying, but Dorit added that Erika sometimes omitting information made her claims “sometimes debatable.”

“Everybody can f— off, I know the truth, I don’t care what anyone else says. I was there,” Erika continued. “And also, too, this is happening in real time. There was a competency hearing I was not a part of today. It’s a real thing.”

When asked if it was hard for her to hear that he was deemed “incompetent,” Erika said that it was — but also claimed she was “the first person who raised my hand saying there’s a problem here” after the accident, only to have Tom’s family, doctors and “everybody” blow her off.

“I’ve been living for this for years. There’s a lot of s— being said and I’m not gonna have someone call me a liar. I’m not apologizing, I don’t care if she thinks I threatened her, she should be threatened. That’s it,” she added.

Once the entire cast regrouped with Sutton later in the evening for dinner, it all hit the fan again as Kathy said she was “anxious” about unresolved issues at the table, opening Pandora’s Box. Sutton then tried to explain herself again to Erika, but the latter was not having it.

“I did call a meeting, if you will, about Erika because I was in a nervous place. But I’m not going to apologize for it because I was only asking questions and you really hurt my feelings,” she began. “And you were scary that night at Kathy’s dinner.”

“Don’t call me a liar,” Erika spat back. “I don’t care that you think I’m scary. Why are you speaking to me? I have nothing to say to you, zero.”

“If it makes you feel better to put me down,” Sutton began, before Erika interrupted. “I’m not putting you down, you called me a liar,” she said, “I’m not giving this anymore energy because it doesn’t really need it, this is dumb.”

While Kathy tried to get them both to give each other a little “forgiveness,” she also felt they should stop harping over the word “liar” and focus on the rest of what was being said. Erika still didn’t want to listen, though, telling them all that it was a situation that’s “not going to be fixed.”

The next morning, the conservatorship news was everywhere, so Kyle and Lisa Rinna decided to check in on Erika in her room.

“Yesterday was the hearing for Tom’s conservatorship so his brother could take over his affairs. Someone sent me an article about what was said in court and there was this one piece of it that really bothered me,” she said, before pulling up this Us Magazine article. “It says Tom’s brother asked the court to give him the authority to place Tom in a facility that treats neurocognitive disorders such as dementia.”

On February 1, that’s exactly what happened in court, when Tom’s brother Robert was given temporary control of his conservatorship. That was later made permanent in July. 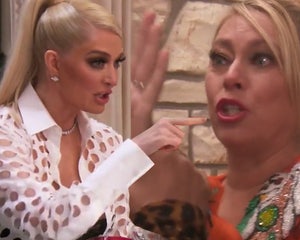 “I’m ready to have a nervous breakdown, because regardless of what is going on with him legally, this is someone I was married to for 22 years,” Erika continued. “I knew this last night before we went to dinner. I read this article, so I sat there with this last night.”

When asked whether she agreed with Tom going into a facility, Erika then explained why she did not. “I have a little bit of experience with this. My grandmother was put into a home, she had very bad dementia,” she said, explaining how “difficult” it was to watch her “grandmother die” there.

“It’s supposed to be great care, but if [residents] lash out, they medicate you and the only way is down. What is his life then?” Erika went on. “Where is this man’s family? It feels like he is of no use to them, so f— it. They don’t want the stain, they don’t want the public scrutiny, they don’t want being publicly associated. It is tragic all the way around. It’s a nightmare all across the board and every day it unfolds more and more.”

She added that while the two are getting divorced, that doesn’t mean she’s “divorced myself from caring for another human being who cannot care for themselves.” Erika also stated she “certainly [doesn’t] want him in some facility where he’s not taken care of and discarded.”

“That is not something I think is okay. It’s f—ed up,” she concluded. “Wanna know who your friends are? Get old and go broke.”

As of August 2021, Tom has reportedly been living in a “facility that specializes in memory care.”

Flag optical illusion shows exactly how colour blindness works… so what do YOU see when the green and yellow vanishes?