Home » Lifestyle » Everything You Need to Remember From ‘The Princess Switch: Switched Again'

Merry Christmas, Switchies! The queen of Netflix, Vanessa Hudgens, is back (and back, and back) with The Princess Switch 3: Romancing The Star this holiday season. Need a quick recap of The Princess Switch 2 before you hop a plane to Belgravia for the third film in the trilogy? Your wish is my command.

After The Princess Switch gave us a pretty standard It Takes Two (which was based on The Prince and the Pauper) storyline—a duchess and a successful bakery owner discover that they are identical, switch places, and fall in love with each other’s love interests—the sequel really had to kick it up a notch and add a third character for Hudgens to play. Here’s what happened and everything you need to remember.

Kevin and Duchess Margaret broke up.

She’s sorta, kinda (not really) dating an old friend named Antonio Rossi now, who’s also her chief of staff. He’s proposed, and while she’s not in love with him, she’s considering the match. She’s also about to become queen! Stacy decides to visit for Christmas and brings both the heartbroken Kevin and his daughter with her.

Princess Stacy and Prince Edward are still together…

But Edward is having trouble getting, err, alone time with his pastry chef wife.

Then Cousin Fiona Pembroke shows up…

The third lookalike is fashionable and brash—basically the prototype for Emma Stone’s Cruella. She has two incredible minions named Reggie and Mindy. She’s prepared to do anything to steal the thrown from her “Cuzzie Maggie Moo.” Fiona is the perfect camp villain.

The OG doppelgängers are simply switching so that Margaret can spend a relaxing and flirty day with Kevin. Stacy wants to do her friend a favor and take over the royal duties for the day. Though she’s disguised as the queen-to-be, the switch actually gives Stacy the opportunity to connect with Edward and learn that he’s hurting.

But what they don’t know is that Fiona has also disguised herself as Margaret and intends to get herself crowned as queen so she can do some royal looting.

Obviously, they think she’s Margaret because of the switching.

But everything works out in the end…

The real Margaret arrives and saves the day. Fiona, Reggie, and Mindy are arrested AND we learn that Antonio Rosso was willing to team up with Fiona and betray Margaret.

Kevin and Margaret get married in an airport.

Romantic! Spontaneous, just as they like it! Stacy and Edward reconcile as well. All of the couples are in a good place at the end of the movie.

There was that random cameo… 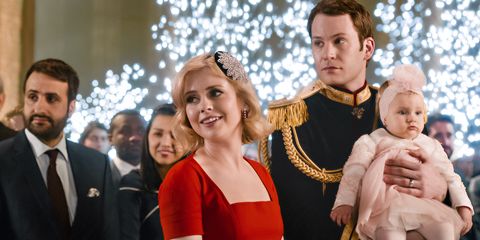 Here’s what to expect from The Princess Switch 3

The official summary is as follows:

Are you ready for more switching, and what I’m GUESSING is a beau for Fiona?? I know I am.

Bizarre underwater 'squidbot' is a breakthrough in soft robotics