Take a woman with brains, star power and political ambition and what do you get? 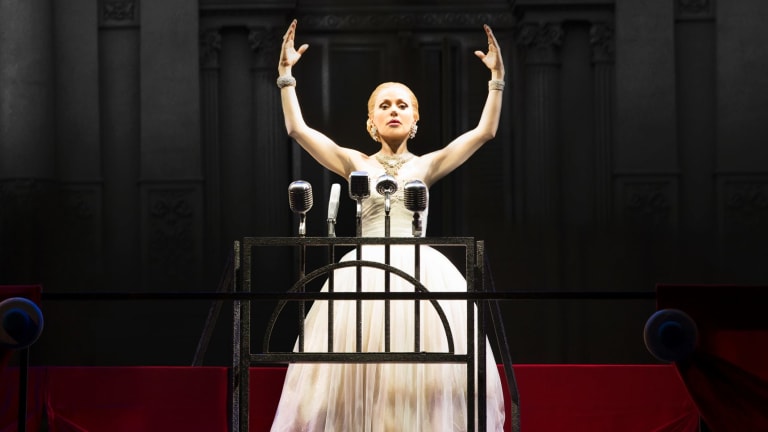 Oh, what a show: Tina Arena delivers the showstopper in Evita.

Not a safe seat in Federal Parliament, that's for sure. What you do get is a show with renewed currency about the rise and demise of one of Latin America's most intriguing and controversial figures, Eva Peron.

You also get a woman at the height of her musical powers in the show-stopper scene as Tina Arena, in the title role, steps regally along the presidential balcony to deliver with melting clarity and conviction the anthemic Don't Cry for Me Argentina.

The masses assembled below – the poor who have just swept her husband to power – cheer, convinced the woman who grew up among them has never left them, despite appearances.

Arena's rendition captures the complexity of Evita herself, with her mix of passion, grand ambition and manipulation.

Much of our image of Peron today, and her entry into pop culture, comes from this landmark musical by Andrew Lloyd Webber-Tim Rice.

Born in rural poverty, Peron became Argentina's first lady. Along the way, she traded her backwater home for Buenos Aires and her tango-singer lover for more upscale models, until she met her ambitious match in soon-to-be president Juan Peron.

In this 40th-anniversary restaging of the original Hal Prince production, the misogyny, sexism and patronising disdain by the powerful forces arrayed against our heroine takes the breath away. Not least because some of the abuse seems as current as that excreted by social media trolls. Rice's lyrics still pack a punch.

Was she a woman on the make or the making of a president? This musical allows scope for both interpretations, and even a bob-each-way. She was adored by the poor but loathed by the elite. She championed workers and women's rights, but may have had her hand in the till as her husband's regime became increasingly dictatorial.

As Evita's strength fails – she died of cancer at 33 – Arena's yearning You Must Love Me, gives a sense that her relationship with Peron is based on more than expedience. Written for the 1996 film version starring Madonna, and now incorporated in the stage musical, it helps round out her character.

The on-stage forces against Evita are a joy to watch, the champagne-swilling aristocracy and the blue-coated military who march around like malevolent nutcrackers. Indeed, the ensemble numbers are among the musical's strengths, and Larry Fuller's choreography remains compelling.

In the first act Alexis van Maanen, as Peron's teenage mistress dispatched by Evita, delivers a heartbreaking Another Suitcase In Another Hall. Van Maanen is a young talent to watch.

With his rich, powerful baritone, Paulo Szot is a commanding Peron. As physically towering as Arena is petite, they create a dynamic duo.

Kurt Kansley is a charismatic Che. In battle fatigues and black beret, he is modelled on Argentinian revolutionary Che Guevara (even if the real-life Che was off fomenting revolution elsewhere at the time). He is threaded through the action, part narrator, part Greek chorus and part cynical Jeremiah.

This is among the most diverse of Lloyd Webber's scores, drawing on Latin rhythms, military marches and waltzes. These and its anthemic best-known song, used as a leitmotiv, are played with pace and subtlety under Guy Simpson's musical direction.

With staging that utilises real images of the Perons, this Opera Australia-John Frost co-production may be less flashy than the mega-musicals that came in its wake. But it is a classic show that puts performance centre stage and leaves the audience to decide what to make of this divisive woman.

Facebook Is On The Cusp Of Letting You Unsend Messages

There are three things we need to get out of lockdown

‘I was angry': Heartbroken Cass healing from brutal Bach dumping