Wands at the ready, wizards and witches! Newt Scamander’s international journey to help defeat Gellert Grindelwald is continuing in the third Fantastic Beasts film, but you’ll probably need to refresh your memory of Newt’s Parisian adventure in the 2018 sequel before this hits theaters. Fantastic Beasts 3 won’t premiere until 2021, so start perfecting your fan theories in the meantime.

Warner Bros. announced on April 29 that Fantastic Beasts 3 will debut in theaters on Nov. 12, 2021. This breaks the franchise’s previous pattern of only two years between movies, but like 2016’s Fantastic Beasts and Where to Find Them and 2018’s Fantastic Beasts: the Crimes of Grindelwald, the third addition will usher in the holiday movie season. Anyone else already planning a post-screening Harry Potter marathon?

Details about the third movie’s plot are still under wraps, but a 2016 tweet from J.K. Rowling confirming five films in the franchise points toward Movie 3 taking place in Germany. At the end of Crimes of Grindelwald, Johnny Depp’s titular villain encouraged his followers to spread his anti-Muggle message, and while his dictatorial approach is reminiscent of Nazi Germany, Grindelwald also has roots in Germany. Looks like Newt (Eddie Redmayne) definitely has a few "guten tag" greetings in his future.

Fantastic Beasts 3 will reportedly begin production in the spring of 2020, but when fans see the finished product in 2021, they’ll likely view a grim story. In The Crimes of Grindelwald, Legilimens Queenie (Alison Sudol) joined Grindelwald’s forces alongside Ezra Miller’s Credence, who learned of his family connection to the Dumbledores that may or may not be true. Newt watched his longtime friend and brother’s fiancée Leta Lestrange (Zoe Kravitz) sacrifice herself to Grindelwald’s power in order to help the Scamanders and their friends escape his clutches. 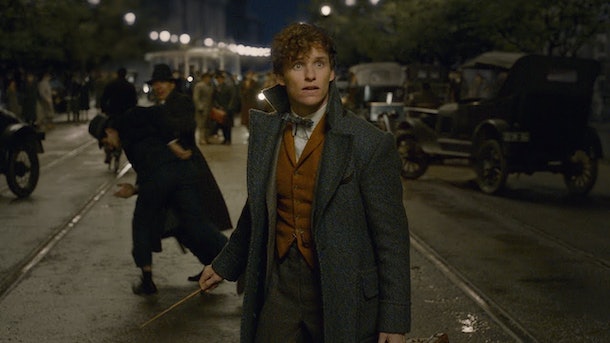 Following the face-off with Grindelwald, Newt presented Dumbledore (Jude Law) with proof of the blood pact the professor once made with Grindewald. The pact had previously prevented Dumbledore from taking an active stance against his former lover, but he and Newt are expected to attempt destroying the oath in the third movie. Meanwhile, older Pottermore canon seemingly confirms that Queenie snaps out of her Grindelwald funk and eventually marries No-Maj Jacob Kowalski (Dan Fogler). We can likely anticipate the rekindling of their romance in an upcoming story, and Newt and Tina (Katherine Waterston) also end up married, meaning their friendship could reach a new level soon.

There’s clearly a lot for the franchise to answer next, and filmmakers understand that fans are expecting an epic story. Reports suggest that the new film’s production was originally scheduled to begin in fall 2019, but its lofty requirements seem to have inspired a delay. In February 2019, Warner Bros. CEO Kevin Tsujihara told the LA Times:

No matter how the new movie may pan out, here’s to another immersive chapter of life in the Wizarding World. Fantastic Beasts 3 is in theaters on Friday, Nov. 12, 2021.

Haiti vows to trim expenses and investigate PetroCaribe amid protests

Fake Amazon reviews are being sold in bulk online