Meghan Markle's fan army had high hopes for the impact she could make on social issues, especially with regards to women, once she landed her feminist self on the global stage.

One thing that endeared her so strongly was that her feisty determination to speak up on gender equality appeared to be such a part of who she is. It emerged as far back as her primary school days when, aged 11, she famously took her complaint about sexist advertising all the way to Hillary Clinton – and won her battle to get a multinational to tone the offensive ad down. 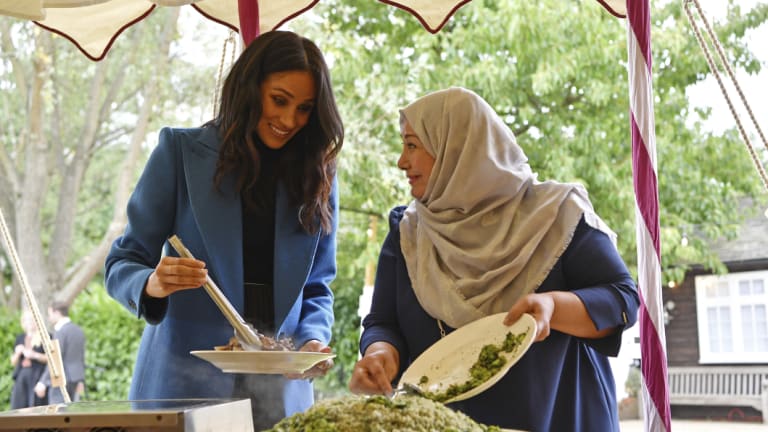 Meghan Markle helps launch the cook-book ‘Together’, a fundraiser for Grenfell fire victims, on September 20.

As she transitioned from women's rights campaigner to royal wife, Markle has toed the line – so far. The nude stockings (on previously nude legs), the cutting back on public displays of affection, the end of her popular blog, the all-round attempt to blend in rather than stand out.

Some have suggested Markle's tacit acceptance of "the rules" around how royal wives behave, and what they can and can't be seen to say or support, is a sign she will disappoint women who had expected her feminism to mean more than a line on her royal bio. At least one has gone so far as to suggest "adoration" of Markle and her sister-in-law is “anti-feminist”.

Then again, the sense from Buck House appears to be Markle has the blessing of the Crown to use her position to “fight for feminism”. Surely someone labelling themselves a proud feminist infiltrating patriarchal Buckingham Palace is better than no one who calls themself a feminist being in there at all.

Having enjoyed a royal honeymoon period that has, for once, not descended quickly into a click-baity chain of take downs, Markle arrives in Australia in October with nothing but goodwill preceding her. 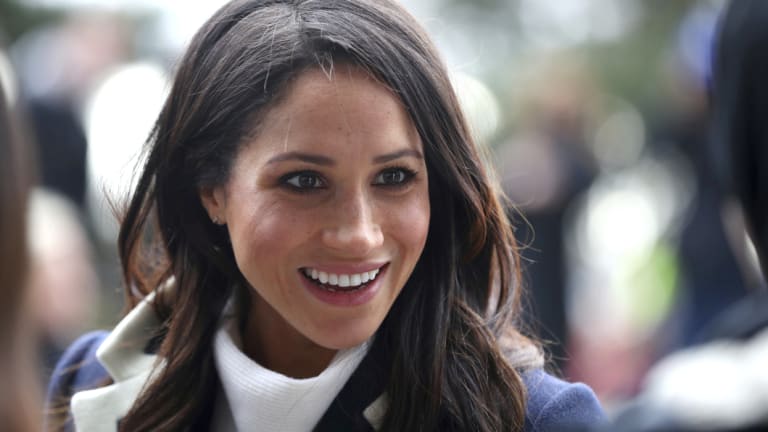 Meghan Markle could add her voice to many local equality and social justice causes in a very meaningful way.

What would be excellent is if Markle chose her first visit to the less stitched-up colonies to come out of her obedient new shell and speak out a little bit – or a lot – on gender issues, especially given the fact so many vital ones are top of mind.

First, Markle should step straight off the plane into meetings with Julia Gillard and Kate Jenkins, to get the historical and current snapshot of gender inequality, discrimination and sexism, and the struggle so far, here. As a survivor of one of our lowest moments of vilification of a woman in Australian public life, Gillard would fully open Markle's eyes to the need to do what she can.

Our highly credible Sex Discrimination Commissioner could update the duchess on the struggle to reduce our seemingly intractable problem with sexual harassment, perfect timing given Jenkins' National Inquiry into Sexual Harassment in the Australian Workplace is in full swing. A word with Catherine Marriott about how women are often treated here when they do go public with harassment allegations wouldn't hurt, too.

Second, Markle would do well to get informed about our horrendously low representation of women in Parliament. How great would it be to see this visiting superstar get behind the embattled Liberal women fighting to force action on this issue (and bullying of women) within their own party, as well as to catch up with women on Labor side to get an off-the-record briefing on life on the internal ladder for women on the left too.

As well, given Markle's long-time support for empowering girls, she should engage with asylum seeker advocates, including World Vision, who have been running a powerful push to get more than 100 children out of detention on Nauru. Girls and boys who have spent their whole short lives unable to leave an island the size of Melbourne Airport could have the direction of the rest of their lives changed if Markle threw in her support.

Fourth, I think all those girls who look up to Markle need to hear her speak off-script and say something, anything, that feels an authentic reflection of her pre-royal personality; if for no other reason than to demonstrate when you are absorbed into good wifedom you do not have to leave your previous personhood to one side.

And last of all, it wouldn't kill Markle – and it may be of great benefit to all the young women watching her – to reiterate the oldie-but-goodie quoted by Bill Shorten last week: "a husband is not a retirement plan". Even if you do end up a princess.

Trump claims he didn't ask Dr. Birx questions, but there is video