Home » Lifestyle » From guns to gowns: TV’s new love affair with the 1880s

Why have one American period drama set in the early 1880s when you can have two? The current weekly episodes of The Gilded Age and 1883, both streaming here on Paramount+, play like two ends of a thread stretched across both a map of America and the history of that nation’s expansion. The shows may be opposites in terms of their outlooks – the former is a high-society melodrama set in New York, the latter a bloody revisionist western that begins in Texas – but you can certainly imagine that they inhabit the same world.

The Gilded Age is set in 1882, just prior to 1883, and the calendar proximity amplifies the unforgiving worlds they both seek to outline and document. In an episode of The Gilded Age, an act of violence might be a wealthy grandee dismissing a visitor by curtly announcing that the butler will see them out, while the 1883 equivalent is a foolhardy interloper being shot dead without warning. Together the programs play off each other, heightening their mutual extremes and sometimes highlighting their failings. 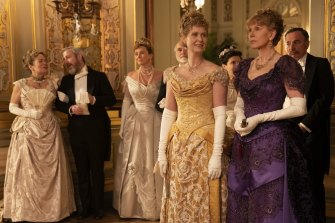 For aristocratic sisters Ada and Agnes van Rhijn (Cynthia Nixon and Christine Baranski) in The Gilded Age, the battlefield is charity events and the nouveau riche family that has moved in across the road.Credit:Alison Cohen Rosa/HBO

The two shows – each of which has had second seasons confirmed – are the work of celebrated and empowered storytellers. The Gilded Age was created by Julian Fellowes, the quintessential scribe of British society who gave us Downton Abbey and the immortal Maggie Smith line, “What’s a weekend?” 1883 is a prequel to the contemporary ranching drama Yellowstone, both of which are the work of Taylor Sheridan, whose wheelhouse is the unyielding American male and the complications he creates and eventually settles.

Fellowes and Sheridan also favour a young woman as the naive but forthright guide for their audience. The Gilded Age begins with the suddenly penniless Marian Brook (Louise Jacobson) arriving on Fifth Avenue to live with her wealthy aunt, Agnes van Rhijn (Christine Baranski), and hopefully find a husband. 1883 is narrated by Elsa Dutton (Isabel May), who with her hardscrabble parents are part of a wagon train undertaking the risky Oregon Trail. “Death is everywhere on the prairie,” she will intone, her voice filled with wonder and dread. “In every form you can imagine.”

The two series are about the conflict that ensues when rival groups compete for the same space. In The Gilded Age that means the “the old people” atop New York society, such as Agnes Van Rhijn, trying to ice out super-rich newcomers like railroad baron George Russell (Morgan Spector) and his ambitious wife, Bertha (Carrie Coon). The battlefield is charity events and dinner invites. While those on the Oregon Trail are busy trying to survive a river crossing on 1883, the 1 per cent on The Gilded Age are quaking before New York society’s empress, Mary Astor (Donna Murphy).

The Gilded Age continues the upstairs/downstairs dynamic of Downton Abbey, although here there are two rival households, which means two sets of staff complete with august butlers, scheming maids and stout housekeepers. The narrative is a balancing act of storylines, romantic endeavours and social hiccups, and Fellowes also attempts to create a realistic Black character, Peggy Scott (Denee Benton), Marian’s friend and Agnes’ secretary. The show zips through scenarios, ticking off nods and updates to historical events. Fellowes is better with the hereditary wealth than purposeful tycoons: George Russell’s business tactics come across as shallow. 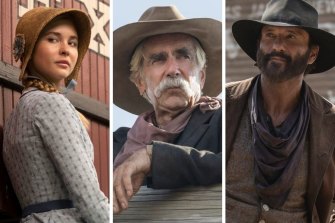 From left: Isabel May, Sam Elliott and Tim McGraw in the revisionist western 1883.Credit:Emerson Miller/Paramount+

There is the usual inversion of time and expectation, with “is she out?” referring to a young woman being introduced to society, but overall the pitch of “Downton Abbey, but in America” is unfulfilling. For all his research, this is not Fellowes’ milieu, although there is pure soap opera potential in the grand gestures and drawing-room demands. One issue is the casting: both the formidable Coon, so memorable in The Leftovers, and Cynthia Nixon, who plays Agnes’ cheery sister Ada, feel terribly miscast in their roles.

By contrast, 1883 opened as a test of the audience’s endurance – a flash forward of a massacre involving Native Americans, a world-weary cowboy, Shea Brennan (Sam Elliott), burning down his home as a funeral pyre for his family following a smallpox outbreak, and a despairing suicide all punctuated the first episode. In one scene Shea enters an office in Fort Worth, where the German immigrants who he’ll be guiding in the wagon train are cowering in terror. They can’t believe the Hell on Earth they’ve come to. Sheridan wants to show the frontier as a brutal, unrelenting environment, shorn of cowboy myths. He mostly succeeds.

1883 benefits from a practical physicality, with numerous wagons and bustling boom town streets (there are more extras in Fort Worth than New York), although Sheridan’s exploration of stoicism and American individualism makes 1883 less of a casual watch. Like its characters, you have to be committed to the journey. Still, nothing would make me happier than for the two series to formally recognise each other. It might be too much to ask Fellowes and Sheridan to write an episode for each other, but if their shared era could allow the sharpest character in each show, straight shooters Shea Brennan and Agnes van Rhijn, to meet and converse, it would be period drama heaven.