Science fiction has long been a realm of futuristic contemplation and there is a moment in Annie Deniel’s new documentary, Steampunk Connection, when today’s collective unease is succinctly captured. Teacher and cosplayer Tisha Goshen suggests that, unlike a hundred years ago, when we look forward nowadays, there’s more fear than hope.

“We think about the future a lot,” she says, speaking for her fellow science fiction fans and also, perhaps, for humanity in general. “But it’s dark.” On the cusp of a potentially seismic social transformation, one that involves coming to grips with what technological innovation has done to the planet, we are right to feel uneasy. 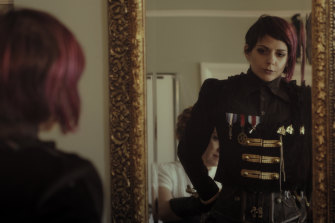 Tisha Goshen in Steampunk Connection: “We think about the future a lot. But it’s dark.”

Part of the SciFi Film Festival currently streaming across Australia, Steampunk Connection takes us inside the flourishing subculture of “steamers”: fans who have embraced the retro-futuristic aesthetic known as steampunk to the point of making it central to their lives.

As with other fandoms, this involves some serious dressing up: lots of top hats, corsets and pseudo-Victorian military uniforms, accessorised with bronze goggles, fob watches and other strange devices. It’s all good fun, but along with celebrating the creativity of the steamers, the film poses questions about what really fuels their dreams. The nostalgia of steampunk is ambiguous in several respects, as Deniel’s highly articulate subjects are often the first to point out.

In one sequence, a pith-helmeted rapper who goes by the stage name Professor Elemental muses ironically on the fact that crowds at steampunk conventions tend to be largely white, in Britain especially. “I don’t know why all ethnic groups wouldn’t want to celebrate Britain’s empire in the late 1800s and the values that represents,” he quips.

Happily, there’s more diversity in other respects. As Professor Elemental and others note, 21st-century steampunk draws enthusiasts across the spectrum of gender and sexuality, as surprising as this might seem for a subculture that harks back to an era when traditional gender roles went largely unquestioned.

All of this points towards the overarching paradox of steampunk: it’s about looking forward and backward at once, recapturing a vision of the future that looks all the more attractive for being so plainly out of date. Not that the 19th century, when this vision arose, was simply an age of naive optimism. The work of pioneering science fiction writers such as H.G. Wells and Jules Verne, key inspirations for the steamers, can be understood as expressing both anticipation and dread of the technological changes to come.

The SciFi Film Festival – and the Sydney Science Fiction Film Festival, scheduled for mid-November and also streaming nationally – is testament to the seemingly limitless appeal of science fiction. Indeed, a strong case could be made that sci-fi, dark or otherwise, is now the most popular narrative genre worldwide – especially if it’s acknowledged that most superhero sagas fit the bill.

The Sci-Fi Film Festival program includes work from around the world and judging from the shorts and features available for preview, extravagant spectacle is mostly absent – with the exception of the digital animation of Ryan Grobins’ Cyan Eyed, a seven-minute extravaganza featuring sky pirates battling gleaming robots in front of gorgeously coloured clouds.

Literally plausible speculation about the future is not a priority either: mostly, these are films that rely on ideas, performances, and the kind of makeshift ingenuity that the cosplayers of Steampunk Connection put into their outfits and scrap-metal props. 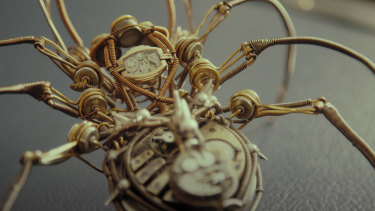 A Victorian aesthetic captures a yearning for the past in Steampunk Connection.

Futuristic worlds tend to be portrayed in broad strokes, often via time-honoured methods such as distorted electronic sounds or sets bathed in weirdly coloured light. Repressive dystopias are a popular theme, with roughly equal amounts of inspiration drawn from Black Mirror, The Handmaid’s Tale and real life.

Typical is Alden Peters’ short Friend of Sophia, in which a human (Janine Hartmann) and a cyborg (Fennell Chakendra) contemplate hooking up despite a crackdown on “techno-sexual deviants”. Another short, Kasia Kaczmarek’s Maeve in the Dark, takes a similar premise a couple of steps further, pairing its ailing heroine (Sekela Nancy Ngamilo) with both a male robot nurse (Bailey Pilbeam) and a ghostlike female hologram (Lianne Harvey) in the context of a pandemic that solely affects young women.

These are films about human connection, or the yearning for it, along with a fear that this yearning may be hopeless for reasons beyond an individual’s control.

Another no less “human” theme that crops up across the festival is the imagination itself: the risky yet thrilling enterprise of creating a fantasy and stepping inside. The trick here is that much of the story can take place in recognisably mundane reality, usefully from a budget point of view. Then, at key moments, the lead characters step into a heightened alternate dimension, and become powerful figures playing for higher stakes. 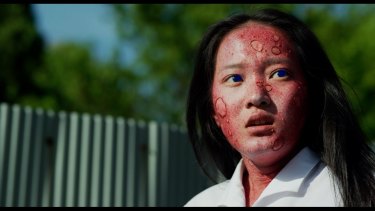 It’s a device that can take many forms. In the Brazilian teen movie Tales of Tomorrow, directed by Pedro de Lima Marques, the hero (Bruno Barcelos) is a precocious hacker whose computing skills let him connect with the far future. Not too dissimilar is Naeri Do’s Trans, another teen movie, this time from Korea. The title doesn’t mean what you might think, or not on the surface: rather, it refers to a quest to become “transhuman,” involving zany experiments with electricity inspired by Nikola Tesla.

Then there’s Victor Villanueva’s Lucid, in which a Filipino office worker (Alessandro de Rossi) compensates for her boring waking life by controlling her own dreams – a process that resembles stepping into a virtual reality simulation, where anything that doesn’t please her can be replaced at will.

Not just escapist, these are films about the desire to escape, a theme shared with Hollywood blockbusters such as the current Free Guy. They’re also about subjects such as teenage awkwardness, bullying, and wage slavery – in short, they capture the sort of everyday feeling of oppression that will resonate with almost anyone.

Many of the subjects of Steampunk Connection describe themselves as misfits who have finally found a place they fit in. Are they simply escapists who have taken refuge in a fantasy, even a consciously reactionary one?

Deniel doesn’t insist on any conclusions about what the steamers are doing, its political significance least of all. And clearly, steampunk doesn’t have much to tell us directly about what the world will look like in another hundred years. Nonetheless, the film leaves room to feel that in the search for a viable collective future, a science fiction imagination might be a useful device to have on hand.

Capricorn Rabbit Monthly horoscope: What your Chinese and Western zodiac sign has in store for you

Everything Leaving Netflix in July

Comedian D.L. Hughley tests positive for coronavirus after collapsing on stage in a club and claims he had ‘no symptoms’ – The Sun