DEATH OF THE BUSHRANGER MORGAN 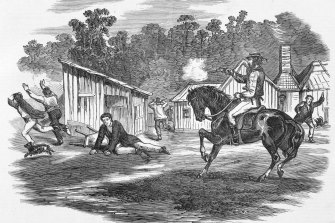 An engraving of Morgan shooting at men from horseback.Credit:State Library of Victoria

On the morning of Sunday, the 9th, Daniel Morgan, one of the most formidable bushrangers who ever infested the soil of Victoria, and, indeed, the only member of the class, of any notoriety, who had for a very considerable period made his appearance amongst us, was mortally wounded, and, immediately afterwards, made prisoner by a party of police and volunteer civilians who, from information previously received, were in pursuit of him.

The occurrence demands something more than a passing notice, inasmuch as, for within a small fraction of two years previously, the scoundrel had been the terror of the neighbouring colony of New South Wales, and had successfully defied all the efforts made by the police of that territory for his apprehension.

It would be superfluous to run through the long catalogue of this monster’s crimes in detail. It will be sufficient to state that, for upwards of ten years past, he led a lawless life, gradually increasing his proficiency in crime until he had risen to the distinction of a triple murderer, and one of the most wholesale robbers on record. 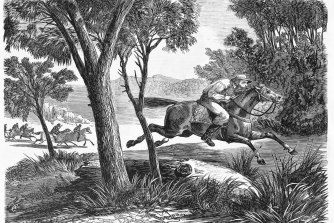 An engraving of Morgan evading police on horseback.Credit:State Library of Victoria

He was born in New South Wales, and, at the time of his death, was some two or three and thirty years of age. Like very many of the native-born youth of the neighbouring colony, he was a most accomplished and fearless rider; and, to this circumstance, doubtless, must be in a great measure attributed many of the hairbreadth escapes which he is reported to have had, from time to time, from the mounted constables of his own country.

His criminal career, in the full sense of the term, seems, however, to have commenced in Victoria; as in the year 1854, he received at Castlemaine the heavy sentence of twelve years on the roads, and served upwards of three years of the term in confinement. He then obtained a ticket-of-leave; and, sometime afterwards, absconded into New South Wales, where he appears, for a further considerable period, to have led a solitary life in the bush, and, under the sobriquets of “Down the River Jack” and “Bill, the native,” he possessed an unenviable notoriety amongst the settlers.

At length, on the 17th June, 1863, we find him committing two robberies under arms at Walla Walla; and, from this period, he pursued his desperate career, without intermission, to the period of his again quitting New South Wales. In this interval he murdered three men, dangerously wounded, with intent to kill, four others; plundered three mails, and committed ten robberies under arms. 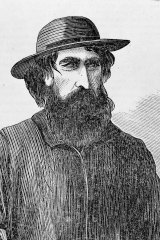 An engraving of Daniel ‘Mad Dog’ Morgan.Credit:State Library of Victora

Amongst the victims thus enumerated, two, named McGinnerty and Smith, were sergeants in the mounted police force. The former he shot dead upon the spot whilst the officer was riding up to ascertain who he was. The latter he mortally wounded while the unfortunate fellow was lying encamped after the nightfall with some of his men in a solitary hut in the bush. The other of his murdered victims was a Mr. McLean, a cattle dealer, whom, after giving permission to fetch a doctor for another young man, previously shot by him (Morgan), though not fatally, he butchered on the pretext that, as McLean, had taken the wrong road, he (Morgan) feared he was conveying information to the police.

Of those wounded, but not slain outright, one was Mr. Baylis, a police magistrate of New South Wales, whom he shot under circumstances precisely analogous to those under which he had wounded Sergeant Smith. It is needless, however, to proceed further with the sickening catalogue of the ruffian’s enormities.

A few weeks since, partly, as it would appear, because the profits of his nefarious occupation had dwindled down to a very small sum, and partly because he was harassed beyond endurance by the constant pursuit of the police, he announced his intention of paying a visit to Victoria, and, in his own boastful language, of riding through the colony in a week. On Friday, the 7th, it became known that he carried this intention into effect by crossing the river, and on the following Sunday morning he lay dead outside the homestead of the station of Peechelba, the property of a settle named Rutherford, in the Murray district.

No sooner had he crossed the border from New South Wales than he commenced reaping a golden harvest from unsuspecting teamsters and travellers. He also plundered some two or three stations, burning hayricks and doing other damage to property on the premises. At length fate led his footsteps to Peechelba, where, having, as he thought, secured all the inmates, he spent the night in conversation, eating and drinking, and compelling his prisoners, with the exception of some of the ladies, to sit up with him.

News of his proceedings was, however, conveyed by some of the station servants to the residence of Mr. Macpherson, close by, and a cordon of police and armed civilians was formed around the scene of his outrages until morning. Early in the morning, Morgan, having taken his breakfast, was proceeding with Mr. Rutherford and some others to look for a horse to ride away upon when he was shot by a man named Wendland, employed on the station, and he died a few hours later. It is to be hoped that his fate may deters others from following in his footsteps.

Wu-Tang Affiliated Rapper Who Cut Off Own Penis Gets Married