Frenzied fans of the British rock group Queen were dragged from the stage at the end of a Festival Hall concert last night. 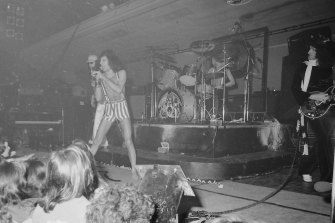 Bouncers had their hands full as young girls tried to leap on to the stage at lead singer Freddie Mercury.

At the end of the show, Mercury stripped to a pair of red and white hot pants and threw roses to the audience.

The crowd — mainly teenyboppers — went wild. The four-man group stunned the capacity crowd with explosions and flooded the stage with smoke.

Their rough blend of hard rock and theatrics almost approached the “feelies” of Huxley’s Brave New World for audience participation. 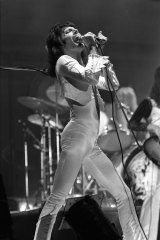 Explosives burst all around the group as they arrived on stage and lead singer Freddie Mercury leapt into Sweetlady.

With a champagne glass held between his black painted fingernails Mercury toasted Melbourne and invited the audience to “join along — do anything you like — take your clothes off if you want.”

And the predominantly teenybopper audience almost did.

After a medley of songs from Queen’s four albums, Mercury launched into Jagger-like posturing across stage and then into Prophet’s Song.

After a very late start at 9.45 — their equipment was late arriving — they gave a full two-hour blast. They also kept an almost constant dialogue with the audience throughout the night.

Sadly it dragged when lead guitarist Brian May give an overlong solo, finishing with a treatment of Waltzing Matilda. The break was needed as the rest of the band left the stage for a quick beer.

At the end of the second encore, Mercury, dressed in red-striped hot pants sang Shirley Bassey’s Big Spender and threw roses to the by now hysterical audience.

Queen then closed the chow with God Save the Queen.

The group will give another concert tonight before, going on to Brisbane for their last Australian appearance.