Home » Lifestyle » Glitter and be gay – or don’t, and still be gay

It's hard to move in Sydney at the moment without tripping over the fact it is Mardi Gras season.

ANZ has wheeled out its GayTMs (cute branding, guys), Broadway Shopping Centre has renamed its escalators as the "Yasss Express" and there are reports a building in Zetland is having its lift operated by drag queens. 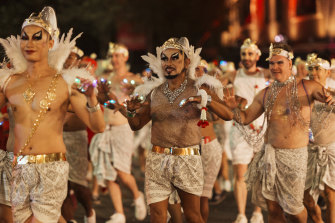 I was about 12 or 13 years old, growing up in a small town in regional Queensland. I already had an idea that I might be attracted to men instead of women and at that point my only exposure to anything gay was a boy who'd been chased out of school because he'd asked another boy on a date, and an old creep in the showers at the beach.

I was curious to know what else was involved.

My parents were, mercifully, early risers and in bed early, so I snuck into the lounge room, popped in my headphones and stood there for a few hours watching the parade of hyper-tanned, hyper-fit men wearing feathers and glitter and tiny shorts dancing to Madonna and Kylie Minogue. 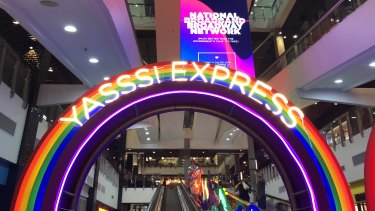 This way to Mardi Gras… or K-Mart.

I quite liked Kylie so I felt I was already part-way there, but I wasn't sure what the glitter and feathers were for.

Flash forward to being allowed into nightclubs and my equally sheltered boyfriend and I diligently applied glitter make-up to our faces, donned the skimpiest clothes we could wear without being mortified and made our way to one of Brisbane's two gay clubs to dance with others adorned with glitter and tiny shorts.

This weekend ritual took up most of my next few years. Tanning and decorating the bits of my body that weren't covered by clothes.

That's what I thought you had to do to be gay, and to a certain degree, to be accepted by the community.

I always, always felt deeply uncomfortable. Not just because glitter gets in your eyes, feathers tickle and not wearing much clothing is cold in winter – I was uncomfortable in my heart because none of this was who I am. It was all a mask… just like the one I had put on when I was younger and didn't want to catch bottles with my head when people found out I was gay.

I started wearing comfortable jeans and a polo shirt. I like collars – they are smart.

I stopped fake tanning and I never wore glitter again.

When I watch Mardi Gras there's no one who looks like me. When I read about it in the papers I read about the "flamboyant", the "fabulous", the "spectacular". 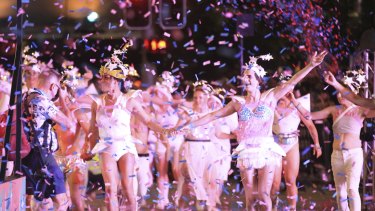 Yes, Mardi Gras is fabulous and flamboyant. But it’s not representative of the entire magnificent rainbow of being gay.Credit:James Alcock

I understand the political history of Mardi Gras, and what the statement of nakedness and in-your-face displays of sex means in a society that once said it was shameful. I appreciate and celebrate the role Mardi Gras participants played in allowing me to be gay without harm, and even write this column. But it isn't me.

Some gay friends have described me as anti-gay, or say that I have internalised homophobia or am not comfortable with my sexuality.

None of that is true. I am proudly gay and I never try to hide it – I don't think I could. I love my gay friends, I have fought passionately for equality and I am glad that Mardi Gras exists for the people who are into that.

But it's not representative of the entire magnificent rainbow of being gay.

Some people want to dance down Oxford Street in a jockstrap to a Cher song, or put on a dress and elaborate make-up and lip sync to Judy Garland.

Some want to watch the footy and drink a beer.

Some want Mardi Gras to return to its original form – an angry, heartbreaking protest about the deep unfairness the community faced, and still faces.

Some want none of that. And that's OK.

Because if you don't fit into the cookie-cutter mould that Mardi Gras represents, if war paint is more your schtick than glitter and feathers, if you don't want to suit the stereotype and want to charge out on your own queer path… you're allowed.

And if you are a young, gay kid in a regional town who plugs his headphones into the telly on Saturday night and you don't see anyone who looks like you, don't worry. I promise there are many of us and our lives are just as fabulous – even without the glitter.

Own an iPhone? Apple could owe you £50 in compensation over battery life fallout