An environmental campaigner and philanthropist who donated half a million dollars to the Greens, Labor, and activist group Get Up has joined an independent push to remove a Liberal frontbencher from Federal Parliament.

David Rothfield, a resident of the Melbourne electorate of Goldstein, says he is no longer associated with any political party and has instead joined a group that wants to oust incumbent Liberal MP Tim Wilson, who was recently promoted to assistant minister for energy and emissions reductions. 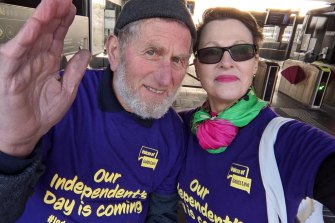 Environmental campaigner and philanthropist David Rothfield – who has given the Greens, Labor and Get Up! more than $500,000 – has joined the Voices of Goldstein movement.

Voices of Goldstein announced its formation earlier this year off the back of the growing socially progressive grassroots movement, which supported former crossbench MPs such as Cathy McGowan and Kerryn Phelps and current independent Zali Stegall.

Mr Rothfield and his brother Jonathan were co-directors of their late father’s trust, the Norman Rothfield Peace and Justice Fund, which was wound up last year. The Australian Electoral Commission’s transparency disclosures show the fund donated $30,000 to NSW Labor Party in 2019, $215,800 to the Greens since 2014 and $260,000 to GetUp since 2019.

It also donated $22,000 to Julia Banks for her campaign to unseat Greg Hunt in Flinders at the last federal election.

Several other well-known Australian environmental organisations also received support from the fund over the past decade, including Greenpeace, the Australian Conservation Foundation, The Australia Institute and the Climate Council.

The federal Liberals have become increasingly sensitive to the threat of moderate independent candidates, especially in progressive and wealthy inner-city seats, since it lost two blue-ribbon seats of former prime ministers – Malcolm Turnbull’s Wentworth and Tony Abbott’s Warringah – in the past three years.

The Coalition faces more than 40 contests in lower house seats from Voices of and Voice for groups, many of which are vying to access a campaign war chest being raised by Simon Holmes à Court, the convenor of Climate 200, who has also amassed $2 million to help independents. They are not contesting Labor seats.

Mr Rothfield, who is president of the Bayside Climate Crisis Action Group, said the trust wound up last year and had been dispersed over a decade by following his father’s wishes and directives.

“He stipulated for funds to be distributed within 10 years of his passing, which was June 2020, as he felt he would be influencing the world that he knew,” he said.

He said he had grown disillusioned with party politics, which was “fed by corrupt practices”, and had distanced himself from the Greens. He said his support for the Voices group was not connected to the trust’s past activities.

The group is yet to announce a candidate to stand on its behalf, but says on its website it is committed to science-based climate action, integrity in politics, and “social and economic resilience”.

“For too long political party representatives have been prioritising internal party politics, party donors, lobbyists and vested interests, at the expense of the interests and priorities of their electorates,” its site says.

Voices of Goldstein’s media liaison Sue Barrett has also been a vocal supporter of federal Labor on social media, wishing ALP candidates good luck at the last election, calling herself a democratic socialist and urging the caucus to stick with its leader Anthony Albanese. 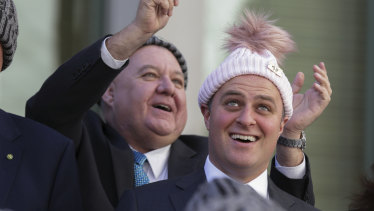 Liberal MP Tim Wilson (right) poses for a photo with a beanie during a brain cancer event at Parliament HouseCredit:Alex Ellinghausen

Ms Barrett said while she had expressed support on social media for Labor in the past she had never been a member of the party. She said Voices of Goldstein was a genuine grassroots community group made up of people who’d had enough of the local MP, Tim Wilson, who she said had made big promises and not delivered.

Mr Wilson said he was not surprised that Greens and ALP supporters were part of the Voices movement.

“They’re the same people normally wearing a red or green t-shirt at a voting booth, and are now wearing purple and hoping for a puppet candidate – it’s tricky and clever, I’ll give them that,” he said.

Is Nikki Haley a Democrat or Republican?