Gwyneth Paltrow jokes about liking penis in response to meme

‘Ain’t that the damn truth’: Gwyneth Paltrow, 45, shocks Instagrammers with very cheeky retort to meme that joked she was ‘thinking about d***’

Gwyneth Paltrow has been dismissed as prim and proper, but the 45-year-old proved on Tuesday that she actually has a wicked — and dirty — sense of humor.

Earlier this week, The Goop founder came across a meme featuring her photo, which jokingly proclaimed that she was thinking about sex — or, more specifically, male anatomy.

Rather than scoffing, though, Gwyneth chimed in and affirmed the joke, much to the delight of fans. 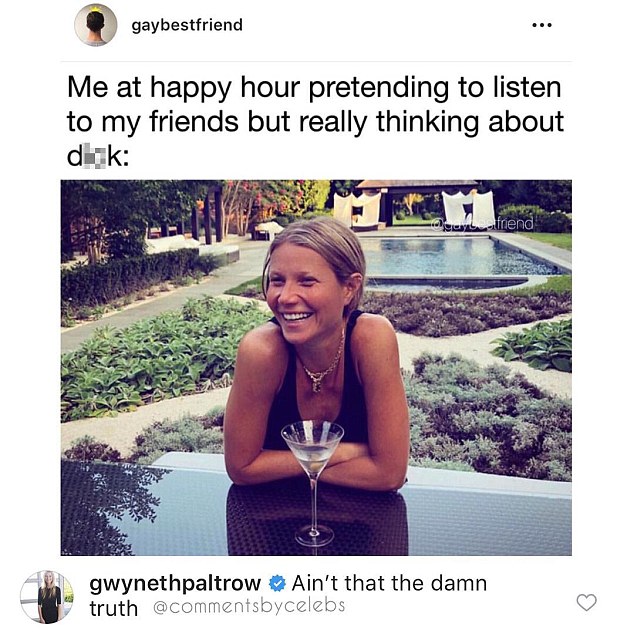 No argument here! Gwyneth Paltrow delighted fans when she responded to a meme about her ‘thinking about d***’ 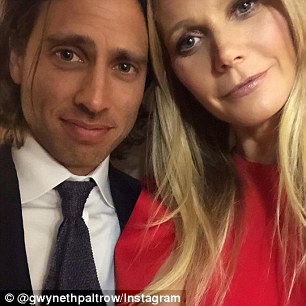 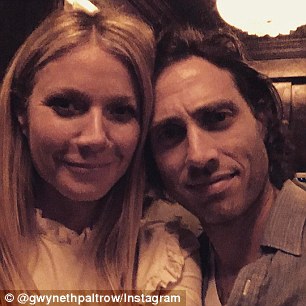 This one specifically? 45-year-old Gwyneth is currently engaged to Brad Falchuk

The photo in question was originally shared by Gwyneth’s journalist pal Derek Blasberg, who captured the shot of her laughing happily with a martini in front of her, and posted it on Instagram with the caption, ‘Gulp, gulp, goop.’

Not long after, Instagrammer Tucker Bellingrath — who goes by the handle @gyabestfriend — turned the snap, which was taken in East Hampton, into a meme.

He added the caption: ‘Me at happy hour pretending to listen to my friends but really thinking about d***’

The meme soon caught the eye of Gwyneth herself, who seemed to find it pretty funny.

‘Ain’t that the damn truth,’ she wrote.

Later, the meme and Gwyneth’s response were re-posted by the Comments by Celebs account, which delighted fans. 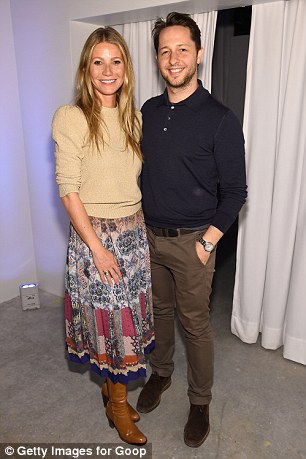 While the comment came as a surprise to some, Goop superfans are all to aware of Gwyneth’s naughty streak.

‘What people are surprised about me, when they meet me or work with me or hang out with me, is I have a really, really, really dirty sense of humor,’ she told CNN in 2017.

‘People think I’m pretty buttoned-up and prim and proper, but just tell me a joke about balls or something.’

Speaking to Elle in 2011, she addressed the shock expressed by some after an interview with Chelsea Handler, in which Gywneth used the c-word.

‘It’s good to shock people who think of me as the prim Gwyneth Paltrow,’ she said.

‘If you speak to my friends who’ve known me since I was 4, they’ll say, “That is her.” They always said to me, “You’re the dirtiest person in the world, and so funny. Show the world that side of you.”‘