Halsey looked incredible on the ‘SNL’ stage as she wore an all leather cat suit for her 1st performance of the evening. She was joined by legend Lindsey Buckingham for the 2nd.

Halsey, 27, returned to the SNL stage for the fifth time — and she proved why. The singer sounded incredible as she performed her defiant single, “I’m Not A Woman, I’m A God” in a superhero-esque leather cat suit. “I am not a woman, I’m a god/I am not a martyr, I’m a problem/I am not a legend, I’m a fraud,” she sang during the chorus, looking flawless under the lights. 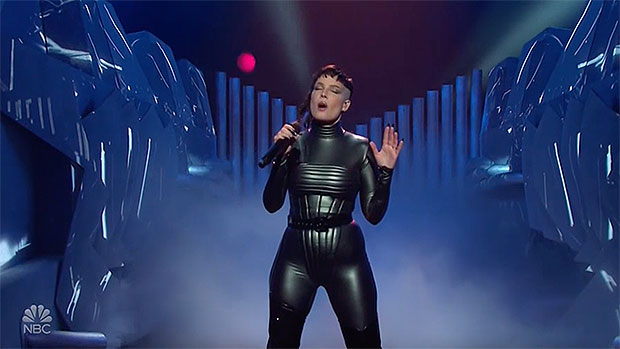 For her next performance, she was joined by Lindsey Buckingham, 72, of Fleetwood Mac. The rock legend also appeared on her recent album If I Can’t Have Love, I Want Power, playing the acoustic guitar on “Darling.” Halsey’s vocals sounded whimsical and dreamy over Buckingham’s simple guitar tune, and the two created a forever memorable moment on the SNL stage. At one point, Lindsey beautifully harmonized his vocals with her on the chorus. “Ladies and gentleman, Lindsey Buckingham!” Halsey declared at the end of the performance, clapping with the audience.

The New Jersey native, née Ashley Nicolette Frangipane, released her fourth full-length album  in Aug. 2021. The 13-song project details the singer’s experience being pregnant and giving birth to her first child Ender Ridley, now 2 months old, with partner Alev Aydin. Halsey was clear, however, that the album was not intended to be about “girl power.”

“Everyone’s like, ‘Oh, it’s like this is a girl power album,’ and I’m like, ‘No, it’s not,’” she said, setting the record straight. “Also, not for nothing, but the lead single is ‘I Am Not a Woman, I’m a God’ — it’s not a girl power album,” she said to Apple Music host Zane Lowe. “From the jump, I’m like, ‘I’m not a woman.’ I’m not saying any of that. There’s no girl power in this album. … Being pregnant, writing this album, people are expecting girlishness, you know what I mean? And any time where I ever talk about womanhood, motherhood, femininity, I’m usually talking about it with a taste in my mouth. Like, go be a big girl, a girl is a gun, all I can taste is the blood in my mouth,” she also said.

Halsey is no stranger to Studio 8H: the singer made her first appearance back in 2018 with her breakout single “Him & I” with G-Eazy. She subsequently pulled double duty as host and musical guest in 2019 in support of her Manic album, and again in early 2020.

Ahead of the show, the singer tased she “might skip” Saturday Night Live in favor of playing with her sweet son!  “Feeling very busy playing with my baby’s chubby legs and tater tot feet might skip SNL idk,” she posted earlier in the day,” she tweeted.

Coronavirus survivor, 53, who fought for life says ventilator ‘felt like leaning out of car window at 70mph for 9 days’ – The Sun