One of the things Harry & Meghan: A Royal Romance is able to do for fans of the IRL couple is dramatize those early moments when they were dating in secret. The truth is mainly speculative, but still fun to watch. For example, did Meghan and Harry really go to a Halloween party in Toronto? The Suits crew celebration may have had a royal visitor, according to this Lifetime film. (Bustle reached out to the royal press office for comment on the movie’s claims, but did not receive a response.)

In the film, after Harry has been hiding in Meghan’s home while she works, Meghan insists they go out — in costume, of course — to a party that her coworkers are throwing at Soho House. They have a nice time until Harry is recognized by some surprisingly rude Canadians with his mask off, he and Meghan leave together, and someone snaps a photo. The next morning, a gossip columnist has picked the story up and their secret relationship bubble has officially popped.

Did this happen? Something like it may have. In November, 2016, the couple was reportedly spotted at a Halloween party in Toronto’s Soho House, according to The Star — the outlet that breaks the news in the TV movie as well. The report even mentioned the secret matching bracelets that appear in this scene in the Lifetime movie. So the scene in the film is based on this spotting, at the very least. A year later, Hello! Magazine also reported that the two had spent Halloween together in Toronto. And, according to E! online, a masked Harry and Meghan trick or treated together one Halloween. 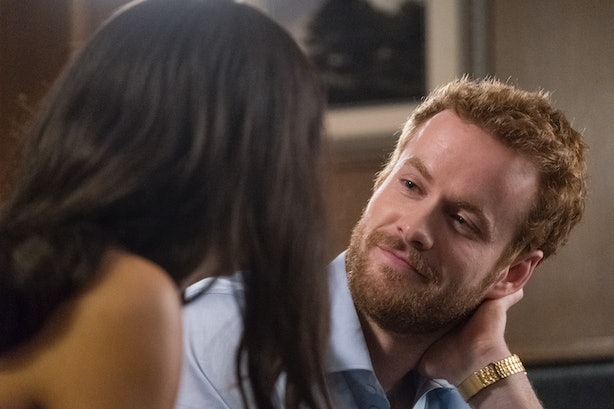 Were the couple dressed as Hillary Clinton and a frog that year, as they are in the Lifetime original? That part is less clear. On a Nightly Show appearance before the 2016 election, Markle spoke in support of Clinton’s campaign. It is, at the very least, a clever way for the film to ground this moment in time — albeit, a bit depressing, as the fictional Markle (like many of us) is excited for Hillary to be President, which of course didn’t happen.

In real life, Prince Harry’s official statement about the relationship, a bright romantic spot during a fateful week, was Nov. 8, 2016 — Election Day in the United States. It speaks of the media and public’s behavior the week prior, which would have included the reported Halloween incident:

All in all, and as far as the Halloween party is concerned, this doesn’t seem like a remarkably inaccurate description based on the known timeline of Harry and Meghan’s relationship. Even now, the two remain private about those early days, though, so we’ll likely never know for sure.

Still, the Lifetime movie is at the end of the day a dramatized version of events. The rude crew member and the girl who snapped a photo (no photos appeared in The Star column) may not have existed. It’s all part of a story — a story royal fans have loved for the past two years and can’t wait to see culminate in the real Harry and Meghan’s big day in May.

Stanley Donen, Who Reinvented the Movie Musical and So Much More, Dies at 94