Home » He lost me at sourdough: Ben Elton dazzles but delivers a limp ending

After 12 months without an outlet to hone their craft with a physical audience, many comedians worried they may have lost their finesse and ability to work a crowd. 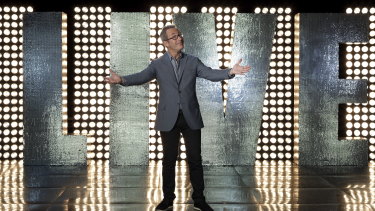 Ben Elton on the other hand? He took 13 years off stand-up. This is his first Australian tour since 2006, after the entertainment polymath put the brakes on his touring career to spend more time with his young family and focus on his novels.

But despite the gap years, he has returned to the stage as sharp as ever. The Blackadder and Young Ones writer eloquently motor-mouthed through a two-hour set that churned through enough material for four.

Liberal politicians, Rupert Murdoch and Sky News pundits were firmly in the crosshairs. Elton also offered myriad thought-provoking observations on sexuality politics with honest and nuanced introspection. As a 61-year-old cis straight white male, his documentation on the progression of his outlook on gender fluidity was a strong highlight – as were snipes at those who think political correctness has gone too far and men who feel threatened by the #MeToo movement.

However the final 30 minutes could use a tight edit or be cut completely. Elton reverted to cliched material about millennials and their inability to enter the property market due to a love of avocado and ciabatta, rants about craft beer and the 2020, ahem, rise of sourdough bread.

Having just witnessed 90 minutes of insightful political and social commentary, it felt like a rather deflating conclusion to an otherwise first-rate show.

Ben Elton is back in June for a show at The Forum. Tickets go on sale Friday.

Did Jill Duggar Totally Avoid Her Family for Yet Another Holiday?

WTF Is Dietland All About?