Spoilers ahead for Infinity War. Since you clicked on this article about the ending of Avengers: Infinity War, you hopefully know the news by now that Thanos triumphed in his plan to wipe out half the universe. Even though you were warned about Thanos’ power, you probably didn’t expect it to actually happen, and the only question now is, what does the Infinity War ending mean? Are Bucky, Drax, Groot, Mantis, Wanda Maximoff, Peter Parker, Peter Quill, Doctor Strange, T’Challa, and Sam Wilson actually dead? And what about Loki and Gamora?

It sounds way too bleak to believe that all of the many deaths in Infinity War are final, but the one post-credits scene does plant a bud of hope for them all. Th scene might feel gratuitously cruel — for it shows Nick Fury and Maria Hill getting vaporized after so many others have just shockingly died, basically throwing an extra bit of salt on your wound — but it has one detail that should give you hope: the text Nick Fury sends. As his last act before disappearing, Nick signals Captain Marvel (Brie Larson), and she might actually be able to save the day. After all, Marvel Studios’ president Kevin Feige called Captain Marvel "the most powerful superhero that we’ve ever introduced," while talking to Variety at the Infinity War premiere. 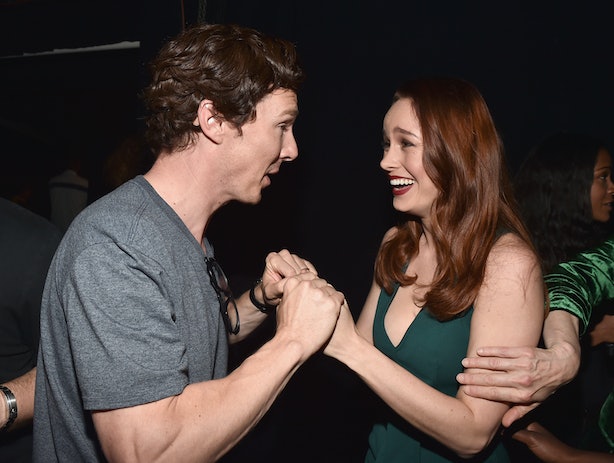 It’s safe to assume that Captain Marvel will play an integral role in the untitled fourth Avengers movie, which is set to come out on May 3, 2019, as Digital Spy reports. It’s even safer to assume that she will participate in Avengers 4 due to the fact that her own origin story will get the spotlight in Captain Marvel, out in March 2019. Feige’s comment about the newest female superhero, also known as Carol Danvers, should make you feel at least a little bit better about the Avengers’ fate considering she is so powerful.

Just how powerful Captain Marvel will be in the MCU is still unknown, but if she’s going to bring back half of the universe from the dead, she will probably need to have some never-before-seen abilities. That’s not to say that Larson’s character will have to singlehandedly save the superheroes left dead in Thanos’ wake, though. If Captain Marvel shows up in Avengers 4, she will likely join Nebula, Tony Stark, Steve Rogers, Thor, Bruce Banner, Natasha Romanoff, Rhodey, Rocket Raccoon, Okoye and M’Baku. The survivors of Infinity War make up for a pretty powerful team on their own, but adding Captain Marvel to the mix might just be what they need to finally defeat Thanos, whose return was promised at Infinity War‘s end.

As for how this incredible team of surviving superheroes might find a way to take Thanos down, that’s when things get even less straightforward. You might want to start mentally preparing yourself for a full year of theories to flare up as each new Marvel movie comes out following Infinity War. For example, you’ll probably get a better idea of how Captain Marvel might help the Avengers achieve what they couldn’t in Infinity War, with double the people, in her upcoming movie. Danvers has a lot of superpowers which include flight, psychic abilities, and "energy manipulation," according to Cinema Blend.

One of the main theories that fans formulated in anticipation of Infinity War had to do with the Time Stone, which Doctor Strange wielded before Thanos got it. Had the Doctor lived at the end of Infinity War, you might still be able to hold out hope that he could join forces with the surviving Avengers to retrieve that one stone and then use it to go back in time to undo Thanos’ damage. This theory still could play out if Wong lived and knows how to use the Time Stone. Or maybe just any old Chris can work it, it’s hard to know now.

Infinity War definitely raised the stakes on every Marvel movie that comes out over the next year. The chances are, a lot of new information about how the Avengers could finally beat Thanos will probably come out in Ant-Man and the Wasp, Captain Marvel, Venom, Silver & Black, or even Dark Phoenix. Get ready to see a lot of movies.

Step Up Your Summer Shoe Game With 2019's Hottest Sandal Styles, All From Zara!