The toughest challenge making a television show about a football team is trying to persuade the actors that they should leave the tough stuff to the stuntmen, writer/producer Nkechi Okoro Carroll says. Carroll, whose television credits include Bones, Rosewood and The Resident, says the cast of her most recent series, All American, do periodically suffer delusions of football grandeur.

"The biggest thing for me was realising that I have to fight my actors not to do their own stunts," Carroll says. "I have never met a group of guys who are like, 'No, no, I got it". And I am like, 'No, I need you to be alive for the next scene, just let our stunt guy do it'. But they're so dedicated to it.

"They're actually really good. So for us, we're sort of the balance of OK, well, how much we let them do themselves, and also protecting our actors and not wanting to wear them out." 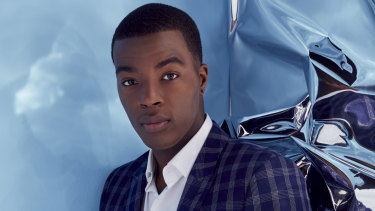 Daniel Ezra from All American.Credit:Warner Bros

All American is based on the life of US footballer Spencer Paysinger, a now-retired American football linebacker. The series stars Daniel Ezra as Spencer James, a star wide-receiver at Crenshaw High School who transfers to the more affluent Beverly Hills High to play football. The series explores social and racial issues, and the cultural divide within Los Angeles where schools from working-class and affluent neighbourhoods compete in sporting codes.

The show's first season ended with a dramatic twist: Spencer was leading his new team onto the field against his old teammates from South Crenshaw High, and later discovered that his father had been named coach of his former team and was asking Spencer to return in the coming football season.

"We will definitely answer the cliff-hangers, hopefully in unexpected ways," Carroll says. "And I think that what we continue to do on the show is sort of represent these two families that sort of have Spencer at the heart of it and coming from two different worlds. And just what it is like to be a teenager in America right now and all the joy and stress and drama that comes along with that."

The new series picks up almost immediately after the season finale and Carroll says the fact that the football season has ended will not slow down the show's narrative.

"One of the beautiful things about high school football is, even though technically the season's over, the season's never really over," she says. "So we're going to be diving into off-season seven-on-seven scrimmage league."

Carroll says she leaned on her husband's teaching connections to tap his school's coaching staff.

"I was like, tell me what you do the minute the season's over [and I discovered] it gets highly competitive and it's very personal," she says. "And a lot of football players we spoke with talked about how that time of year was their favourite because they felt like they got to play the football they really wanted to play."

In terms of story planning, Carroll says she tries to keep the threads of the series as organic as possible.

"Spencer Paysinger, whose life the show is inspired by, we still talk every week and there is always some new story," Carroll says. "There is also the fact that I am the mother of two very athletic black boys and there is a lot of stuff that happens in their lives that relates to the show. And much to my sons' embarrassment, I put it in there."

At other times, subjects and issues are raised in the writer's room or in the headlines, and she thinks: "If we don't deal with it, who is going to? We're the show to do it so let's figure out the All American way to do it and let's put it out there, and spark that debate and spark that conversation, and sort of take our opportunity to try and make a difference."

"For us, the show has never just been about football," she says. "It's always been about authentically portraying the teenage experience in modern-day America and what that means for everyone across the board."

She also promises that the show will not turn into Beverly Hills, 90210, with a cast of middle-aged actors playing high schoolers.

"The beauty of sport is that it carries," she says. "They're not going to be in high school forever and there is a plan for what the show looks like and how we keep everyone together after it. These guys are very much my second family, and they're going to be stuck with me for a really long while."

All American season two streams on Stan, which is owned by this masthead, from October 8.

Symphonic Metal at the Movies: What to Expect When Metallica’s ‘S&M2’ Hits Screens