Unless you’ve been living under a rock, by now you’re aware of the dramatic saga between Khloé Kardashian, Tristan Thompson, and Jordyn Woods. And, in case you’re not aware of the more recent updates, allow me to fill you in: on Feb. 26, TMZ reported that Woods will be appearing on Jada Pinkett Smith’s Red Table Talk show on Friday, March 1, though the details surrounding the interview itself aren’t readily apparant just yet. But many fans are wondering why Woods chose that particular show to open up about what reportedly went down between her and Tristan Thompson, and the answer is actually pretty interesting. If you’re wondering, "How are Jordyn Woods and Jada Pinkett Smith connected?" don’t worry, you’re not alone. It turns out that these two have known each other long before the drama began.

To refresh everyone’s minds about what exactly has been going on: Per TMZ, it was reported that Tristan Thompson and Khloé Kardashian reportedly broke up after Thompson reportedly cheated on her with Woods on Tuesday, Feb. 19. The pair were spotted by multiple witnesses getting cozy, and sources say that the two were "all over each other." Elite Daily reached out to Kardashian, Thompson and Woods’ teams for comment at the time of the report but did not hear back.

Then, on Feb. 26, TMZ reported that Jordyn Woods will be appearing on Jada Pinkett Smith’s Red Table Talk show — a Facebook web series that discusses heavy topics with guests, allowing them to open up and reveal a more private side of themselves — on Friday, March 1. A source claimed that Smith intends to "to create a healing between Jordyn and Khloé." 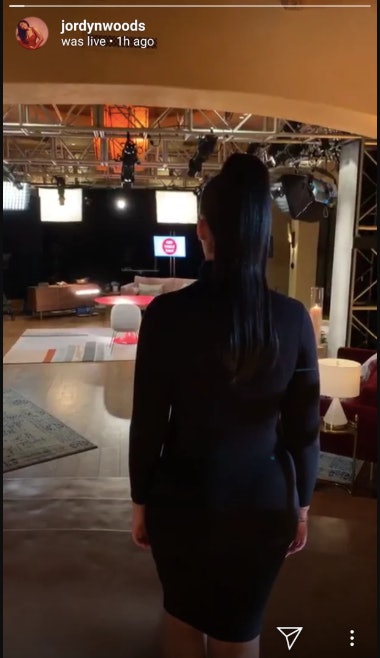 So now that everyone is up to speed, let’s get down to business. How the hell do Jordyn Woods and Jada Pinkett Smith know each other?

Well, it turns out that the entire reason that Jordyn Woods and Kylie Jenner are (were?) best friends is because of a member of the Smith family: Jada Pinkett Smith’s son, Jaden. After that, the pair quickly became best friends since the summer of their eight grade year.

In a YouTube video posted to Kylie Jenner’s channel on July 6, 2018, she talks with Woods about how exactly the two met.

"We met through a mutual friend," Jenner revealed on the YouTube Q&A. "We grew up, she’s known Jaden [Smith] her whole life and then I met him in middle school," Kylie said. "They were best friends, they still are," she said, then jokingly saying, "Whatever!" after noting that fact, because clearly, Kylie didn’t like sharing her (ex) best friend.

You can watch the whole Q&A session below, but I’m warning you: it will make you wish for simpler times:

Anybody else find it hauntingly sad that the advice the pair gave about keeping a friendship forever was "communication and understanding" and "respect for each other"? Big sigh.

So, OK, clearly Jordyn has a connect with Jaden Smith, but that’s not all. It seems as though she’s pretty tight with his dad, actor Will Smith (you may have heard of him?), and back in 2014, she took to Instagram to post a throwback photo of herself and a young Will Smith in honor of his birthday.

"Happy birthday to a man who has greatly impacted my life," Woods wrote in the caption, adding, "Love you uncle willy":

Happy birthday to a man who has greatly impacted my life. Love you uncle willy

So that’s where things are at with Jordyn Woods right now. Stay tuned for her appearance on Red Table Talk, which airs on Friday, Mar. 1.

Jason Tartick Talks Missing Out On 'Bachelor' Gig, Willingness In Doing 'Bachelor In Paradise' Next Summer

Teacher, 29, insists she couldn’t have had sex with pupil, 16, in a plane toilet because she couldn't get her trousers over her hiking boots