Home » Lifestyle » How Did Orlando Bloom Propose To Katy Perry? The Singer Just Shared All The Romantic Deets

If planning a proposal is hard, planning a proposal for one of the most successful pop stars in the world must be an almost impossible task. And yet one brave actor was able to absolutely nail it. So, how did Orlando Bloom propose to Katy Perry, you ask? Well, let me start by saying it was just as extra as you would hope it would be.

While appearing on Jimmy Kimmel Live! on Feb. 25, Perry shared all of the adorable deets with the world. "It was very sweet," she began. "It was Valentine’s Day… We went to dinner and I thought we were gonna go and see some art after dinner but we pulled up to a helicopter."

But, anyway, back to the helicopter. Things didn’t go quite as smoothly as Bloom might have hoped they would have.

"He asked me to marry him on a helicopter," she continued. "Actually, the funny part is we had champagne in the helicopter and the box was in his pocket and he had written down everything he had wanted to say in a note, you know, to divert, right? He was just going to pull it [the ring] out while I was reading it. So, I’m reading it but I’m hearing, like, the champagne is, like, broken, the bottle’s everywhere, and I’m still looking at this note."

Oh, and just when you thought things couldn’t get worse, they did. "Because he’s pulling out this box that’s too big for his coat pocket, it rips his coat pocket and his elbow goes into the champagne and I’m like, ‘No, I’m just reading the note. I know you’re not doing anything,’" she added with a sly smile.

He proposed and she said yes!

"We did land and it was like James Bond," she continued. "Everybody had an ear piece and then we go downstairs (we landed on a rooftop) and my whole family was there. And all my friends. He did so well."

Oh, and if you’re wondering how Perry met Bloom, who she refers to as her "adventure buddy," she goes into detail on that as well.

"Actually, In-N-Out plays a big role in my life," she told Kimmel after admitting the only reason she showed up tonight was because he’s close to In-N-Out and she’s hungover. "We bonded over an In-N-Out burger about three years [ago] at the Golden Globes."

"He stole one off of my table," she continued. "I was sitting with Denzel Washington and he took it and I was like, ‘Wait, who?! Oh… you’re so hot. Fine! Take it!’ And then I saw him at a party and I was like, ‘How are those onions resting on your molars?’ He’s like, ‘I like you.’"

To make things even cuter, she quickly added at the end of the her story, "And then, you know, cut to…" with a flash of her ring. 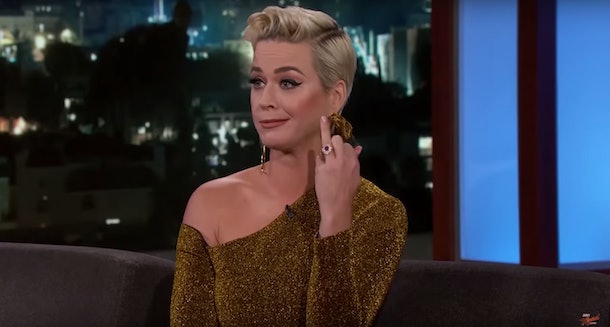 If you’re wondering how he knew to get her that beautiful and very specific ring, Perry told Kimmel, "I voiced my opinions."

So happy for these two adventure buddies and cannot wait to obsessively stalk their wedding pics!

iPhone 12 event: How to watch Apple launch live on your smartphone, tablet and TV