It is only 15 years since Lin-Manuel Miranda was an unknown performer who – at Adam Hills’ suggestion – improvised a rap song about Vegemite at the Melbourne International Comedy Festival. 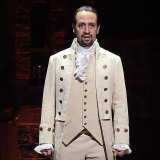 “I knew I needed black and brown bodies and voices”: Lin-Manuel Miranda performs a song from Hamilton during the Grammy Awards in 2016. Credit:Getty

The American singer, songwriter and actor thought Australia was like a “cousin country” at the time. “We were both subjects of the Crown two hundred and some odd years ago,” he says. “We grew up in different parts of the world but there’s a lot of similarities.”

Now Miranda is the high-energy, fast-talking creative force behind a cultural phenomenon – the hit musical Hamilton. And the 41-year-old is as surprised as anyone by the success of a hip-hop version of the life of a previously little-known American politician, first treasury secretary Alexander Hamilton.

“My dream biggest goal was a nice couple-of-years run because hopefully school groups would bring their kids,” Miranda says. He was worried, though, that a couple of “f words” might make even that an unrealistic hope.

What happened when Hamilton opened in New York in 2015 was life-changing for everyone involved.

The then little-known talent of Puerto Rican descent, who wrote the script, music and lyrics and played Hamilton, saw the show become one of the hottest tickets in Broadway history. Fans went all the way from then-president Barack Obama, who invited the cast to perform at the White House, to Rupert Murdoch, who declared it a “fabulous show” on Twitter. 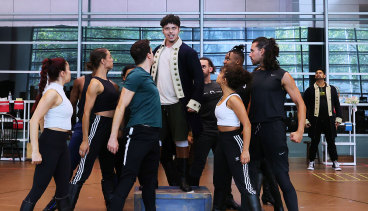 “We were keenly aware that hiring local talent is really a big topic of conversation in Australia”: rehearsals for the Australian production of Hamilton that opens at Sydney’s Lyric Theatre next month.Credit:Lisa Maree Williams

With an Australian production opening at Sydney’s Lyric Theatre next month, Hamilton has racked up an enviable list of awards including 11 Tonys, a Grammy and a Pulitzer. The cast album has sold two million copies.

There have been productions in London and Chicago as well as three US tours – all now closed because of the pandemic. The film version has been a major success for streaming service Disney +.

And Miranda has a flourishing Hollywood career that has included starring in Mary Poppins Returns, an Oscar nomination for a song from Moana, producing and writing songs for a live-action remake of The Little Mermaid and directing the movie musical Tick, Tick…Boom! 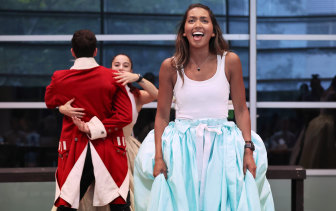 A rehearsal for the Australian production of Hamilton. Credit:Lisa Maree Williams

Hamilton is widely seen as redefining the stage musical – a vibrant hip-hop and R&B take on an unlikely subject with a cast of largely black, Latino and Asian actors playing America’s white founding fathers and their community. 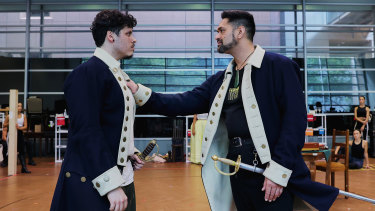 “Everything since that first performance has been extraordinary and unprecedented and I continually find myself in awe of the ways in which it reverberates beyond the arts and leisure page of The New York Times, whether it’s a Jeopardy question last week or seeing it quoted in the political sphere,” Miranda says.

He will not get to opening night in Sydney, being “very much locked down” in New York and virtually schooling his two young sons during the pandemic. But Miranda helped cast the Australian production by watching taped auditions and callbacks of performers to see how different combinations worked.

“We were keenly aware that hiring local talent is really a big topic of conversation in Australia, especially during the pandemic when so many folks are out of work,” he says. “And the wealth of talent we saw was really staggering and overwhelming.”

Two years after his Vegemite rap in Melbourne, Miranda had a Broadway hit as creator and star of the musical In the Heights. Later that year, he bought a book for a Mexican holiday with his then girlfriend and now wife Vanessa Nadal, based on the write-ups on the back cover and the fact he knew its subject died in a gunfight so it would have a good ending.

Miranda was 40 pages into Ron Chernow’s biography of Hamilton – having just read about him leaving a Caribbean island for the American mainland – when he had an idea. 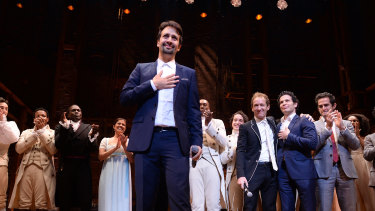 Lin-Manuel Miranda takes a bow after the opening night of Hamilton in Chicago in 2016.Credit:Getty

“I told Vanessa, ‘I think this is a hip-hop show’,” he says.“One of the greatest things my wife did for me that moment was she said, ‘that sounds cool’. She didn’t bat an eyelid, she didn’t say ‘that sounds crazy’.

“I was like, ‘Honey, he wrote his way off the island’. That was the beginning: the thesis of Hamilton as a hip-hop artist who wrote his way to reinvention. And the thesis kept proving me right as I was reading the book.” 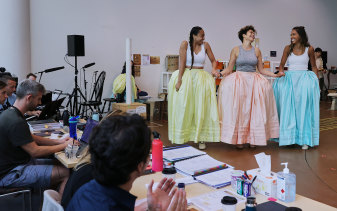 Work: Rehearsing ahead of the opening night of the Australian production of Hamilton on March 27.Credit:Lisa Maree Williams

Miranda originally worked on a concept album – “my Jesus Christ Superstar, complete with murderer as narrator” – before moving on to a musical. And the diverse casting came naturally.

“I knew I was going to be writing hip-hop and R&B music,” he says. “I knew I needed black and brown bodies and voices to pull that off.”

Miranda is now grateful that “Hamilton casting” has become shorthand for having as diverse a group of people on stage as possible. 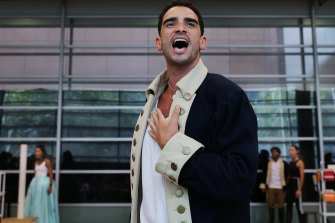 Wait for it: Lyndon Watts in rehearsal for Hamilton in Australia. Credit:Lisa Maree Williams

“The casting of this somehow kicked open some invisible door in a lot of people’s minds and I don’t think there’s any going back from that,” he says.

Not everyone has been a Hamilton fan, though.

Ten days after Donald Trump was elected president in 2016, vice president elect Mike Pence watched the show. Afterwards, one of the stars read a speech that Miranda summarises as “congratulations, we’re scared, please represent all of us”.

The next day Trump tweeted that the Hamilton cast “attacked” Pence.

“It was a sneak preview of what the next four years would look like,” Miranda says. “It’s just not what happened. It’s a straight-up lie. Thus began the death threats, thus began having to step up security. It was the beginning of the gaslighting and he hadn’t even become president yet.”

He is unsure how all the drama of the last year – the pandemic, Black Lives Matter protests and the storming of the US Capitol – will change how Hamilton is received.

“All I can do is quote the show,” Miranda says. “You have no control who lives, who dies, who tells your story.”

Playful Chimps at Georgia Sanctuary Enjoy the First Snowfall of the Season — See the Pictures!