Home » Lifestyle » ‘I didn’t think anyone was gonna hear that album’: Why Mo’Ju almost gave up on a music career

Migrant Coffee has neither the gourmet branding nor the high street profile to stop you in your tracks. But today, one of the greatest singers in Melbourne has lured me 45 minutes west through lunch-hour traffic to this unassuming cafe to share an unforgettable flavour. On a New York bagel.

“It’s not my local, but I will go out of my way to come here,” Mo’Ju says as we take high stools at the communal table in the airy, white-walled lunch bar in West Footscray. “It’s got a bit of a Pinoy twist on the cafe experience. I don’t know if you know much about Filipinos, but we love food.”

Heritage has played a big part in the Melbourne musician’s story. Dad’s Filipino culture and mum’s Wiradjuri bloodline were purely subliminal on those early swamp-jazz recordings by Mojo Juju & the Snake Oil Merchants. “[But] my whole life people have looked at me,” the singer will shrug later, when we get to talking about how identity surged to the surface of their multi-award-winning album Native Tongue. 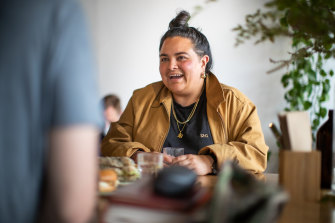 “I didn’t really think that anyone was gonna hear that album. I’d almost given up on my career. Had I known that it would be as successful as it was, I probably would have approached things a little differently …”

Mojo Ruiz de Luzuriaga was born in Dubbo. There was a small Pinoy community there, and that’s where the singer’s sense of belonging seems chiefly to reside. “We would get together and have these parties in, like, someone’s garage, and there’d be long trestle tables with the plastic tablecloths and a karaoke machine.” 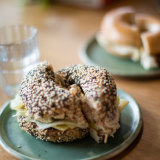 Mo’Ju’s eyes light up with the memory of pancit bihon, adobo, leche flan and other classic Filipino dishes. The karaoke, not so much. “As a singer, the fear is other people’s expectations. But you know, it’s one thing to sing a song that you wrote, or sing a song that you selected because you really connect with it and it suits your voice and you can choose the key …”

But yeah. Even just-OK singers know the terror of a karaoke track kicking in half an octave outside their comfort zone. “And everybody’s like, ‘But you’re a singer!’ It could be pretty terrible. I can sound really pedestrian with the wrong song.” The amusing memory is banished with a flip of the plastic-laminated menu.

There’s metaphorical significance, probably, in the collision of comestibles on display. “From here, but not from here,” is the Migrant Coffee slogan. Their bagels are stuffed with everything from smoked salmon, pastrami, honey and avocado to banana ketchup, hoison mayo and “coconut jam”, Mo’Ju says with a stab of a finger. “That’s the reason I brought you here.”

“I feel like the bok bok manok [shredded chicken with onion, pickles, cheddar and tangy mayo] has got that classic Pinoy salady element. But to me, the thing that sends me back to my childhood is the sweet treat [sliced banana, cream cheese, salted caramel coconut jam]. My dad grew up on a sugarcane plantation so he’s got a real sweet tooth … when we were kids we would always have a spoon of coconut jam and a banana, and you’d suck on the spoon and eat the banana.” 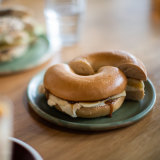 The modest order comes to two bagels to share and one coffee for me. The conversation about music and family quickly jumps back two generations. “My family scattered all over so for a long time we didn’t go back there,” Mo’Ju says of their father’s homeland. “My grandparents were in Hawaii, which actually has quite a big Filipino population … I was probably 15, 16 when I went back and really absorbed it and kind of understood something about my family. It had a massive impact on me.”

Did it feel like home? “Yes and no. It was a culture shock too … I felt like an alien, so it gave me an understanding of myself. I grew up feeling very alone and very isolated and like I didn’t fit in anywhere but then going there, I was just, like, ‘Oh, wow’. I felt privileged, too. I really understood that at the time, though I didn’t necessarily have the language to articulate it.”

The language of music, meanwhile, was fully formed and all-encompassing. Mum’s James Taylor, Roberta Flack, Sade and Tracey Chapman records were big. Dad was into blues and rock’n’roll. Little Richard, Chuck Berry, Roy Orbison, the Beatles. He lived in San Francisco in the ’70s, so he’d reminisce about seeing Sly and the Family Stone and Fleetwood Mac.

“I feel like my biggest influence came from my grandparents,” Mo’Ju says. “My mum’s parents were big jazz buffs so when we were really little, we’d go to jazz festivals with them. For my granddad, Louis Armstrong and Billie Holiday were like saints. There’d be a recording on and he’d be like, ‘Who’s this?’ And you go, ‘Oh, it’s Billie Holiday’ and he goes, ‘No, who’s playing the clarinet?’ He’d know every musician on that cut, where it was recorded, what year … that taught me an appreciation of every player in the band, you know?”

Young Mojo [the name change to Mo’ju came in 2021] inherited a Boosey & Hawkes clarinet from an uncle at seven or eight. You can hear the jungle jazz influence of Duke Ellington and Cab Calloway on the Mojo Juju album of 2012, though by then the switch to guitar and piano was a done deal to let that low, liquid voice take the lead.

“My grandmother would sing hymns. Gospel. I sang in the church choir for a time. Early on, my parents realised, whether or not I was good, that I liked singing. So I started singing lessons really young. My dad didn’t love it, necessarily, that I was obsessed with music. He was always like, ‘You’ve got to have a real job’. But every now and then he would do little things that would contradict that. I think the first time he was impressed was when I learned to play a Jimi Hendrix song in my bedroom.

“I was really lucky I was encouraged but it was something I was really passionate about from a young age. There are photos of me from when I was, like, eight, playing dress-up, sitting in a tux or something at an organ and I look like a baby Fats Waller!”

Hey, Fats was cool. Funny too. “I think that’s one of the things I love about that kind of music is the humour. Louis Jordan as well … I think humour informed a lot of that.” The crisp suits and snappy style of ’50s jazz and jump blues was part of Mojo Juju’s act when they started bringing some old school class to the festival circuit nearly 15 years ago. But that character was just a comfortable fit at the time for an artist with plenty of other ideas percolating. 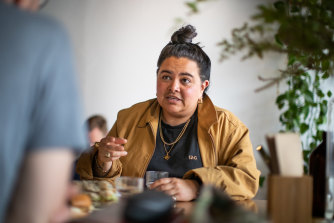 “I think there’s all this … expectation on women and particularly people of colour to be ‘political and authentic’,” says Mo’Ju.Credit:Jason South

“There was a lot of self-preservation in that character. There were times when I wasn’t always comfortable in my own skin. I guess you wear a bit of armour in order to be able to stand on stage. I’m totally an introvert. And I think I just leaned into that whole idea: I’m an entertainer. I don’t need to give away so much of myself.”

That changed almost by accident in 2018. “I don’t speak my father’s native tongue / I was born under the southern sun / I don’t know where I belong,” proclaimed the opening lines of Native Tongue. “My great granddaddy was Wiradjuri / My father came here from the Philippines,” were proud statements of fact, but in a world obsessed with identity politics, Mojo was forced to engage with culture warriors left and right.

“Sometimes I think there’s all this pressure and expectation on women and particularly people of colour to be ‘political and authentic’ and all this stuff. And there’s a part of me that resents that a little bit. Because these other artists like Waits and Dylan and Paul Kelly and Nick Cave, they’re heroes and icons. They write fictions, but with truth in it. I’d really like to just be an artist and be acknowledged for that. I’m good at telling stories. I’m good at entertaining people.”

Receipt for lunch at Migrant Coffee.

With the leap to Native Tongue and beyond, “I think it just took me some time to get to the point where I was brave enough to tell my own stories, because I spent my whole life not fitting in and trying to blend. I didn’t want to be different.

“I used to recoil from queerness and butchness and all these things because it was often portrayed as unattractive. Actually, I was just hurting myself. There’s was this internalised homophobia; internalised racism. I didn’t want to have to talk about it.”

Earlier on, industry pressure to not be “too alienating” sealed Mojo’s resolve on that score.

“Now, I felt like I knew myself well enough. It also felt urgent and important to tell certain family stories; to honour my grandparents. That was a big thing for me because I’m so close to them.”

The bok bok manok is crumbs. Time for the sweet treat. Mo’Ju watches my face with a grin. Mmm. Coco jam.

Mo’Ju’s mini-album OK is out now.