The enormous success of the Fire Fight Australia bushfire relief concert will go down as "an iconic moment in Australian history", says one of the artists who lit up the stage on Sunday.

Gamilaraay and Birri Gubba artist Mitch Tambo, who performed You're the Voice in his native language alongside John Farnham and Olivia Newton-John, said he was confident the benefit concert would be remembered as one of the great events in Australian music folklore. 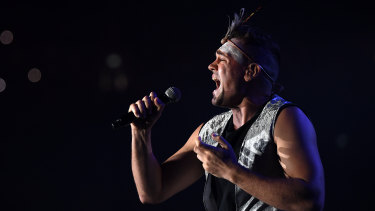 Mitch Tambo brought a new twist to an old classic when he joined John Farnham for You’re The Voice. Credit:AAP

"It was such a massive platform, how could it not go down in the history books?" he said. "This is an iconic moment in Australian history. This is going to be what future generations talk about … when a big portion of the nation is in need, we don't just sit back and let people suffer."

An all-star cast of musical acts wowed the sold-out crowd of 75,000 people who packed ANZ Stadium. The broadcast also delivered a television ratings boost to Seven with more than a million viewers tuning in nationally across the five city metro areas.

The concert, which has now raised more than $10 million for bushfire victims, has drawn comparisons to the iconic Live Aid concert in 1985 which raised hundreds of millions of dollars for the Ethiopian famine. 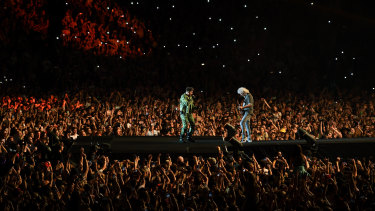 Brian May (right) and Adam Lambert of Queen performed to a crowd of 75,000 at Fire Fight on Sunday.Credit:AAP Image/Joel Carrett

TEG chief executive Geoff Jones said he was "really satisfied" with the outcome.

While admitting "a lot of people" have described the night as Australia's Live Aid moment, Mr Jones was happy to downplay the comparison.

"I wouldn't be as presumptuous as to do that," he said. "Rather than being our Live Aid moment, it was Australians doing what Australians do. We were there to respect our brothers and sisters and we did that."

"A lot of our artists were really, really emotional and that gave me a great sense of pride."

Veteran music commentator Glenn Baker said just as Live Aid did 35 years ago, the Fire Fight concert "captured the attention of the world".

"It was probably the most dramatic one we've done. It set a new standard of production in Australia," Baker said.

"It was bloody convenient Queen had been there the night before and were able to donate their gear and stage – that made it a whole lot easier."

"When the music industry puts something on, you can add a zero or two zeros to the amount raised."

Surfers return to competition after COVID shutdown amid shark concerns

Young Sharon Stone photos: How old was she in the Basic Instinct leg cross scene?