Spoilers ahead for Avengers: Infinity War. After the third Avengers movie, it seems like everything you once knew about the MCU might be completely wrong. Considering that almost every Guardian died except for Rocket (Bradley Cooper) and Nebula (Karen Gillan), it’s hard to even imagine a third Guardians of the Galaxy movie being made. The funky space travelers will definitely be back for a third movie though, which creator James Gunn has confirmed will come out in 2020. But will Zoe Saldana play Gamora in Guardians 3? It’s almost impossible to imagine the character coming back to life after Thanos sacrificed her in Infinity War.

As Vanity Fair points out, the chances that Saldana will come back in Avengers 4 are high, but it could just be in flashbacks or something ephemeral like that. It’s probably not time to start celebrating her return to the galaxy just yet. It’s worth noting that Saldana potentially slipped the name of the fourth Avenger movie, which she suggested was "Gauntlet," while attending a Guardians 2 event, BBC Lizo Mzimba reported on Twitter. In the same interview where she mentioned the sequel to Infinity War, she also explained "We all have to go back for Gauntlet later this year."

According to the blog That Hashtag Show, Guardians 3 will start filming in early 2019. At that point, Marvel will have officially begun its "Phase Four," and the third Guardians movie will also be the last of Gunn’s trilogy. Chris Pratt, who plays Peter Quill, recently told Movie Web, "I know the story [of Guardians 3]. It’s going to be freaking amazing." As promising as Pratt’s comment sounds, it’s hard to imagine a future Guardians without Gamora.

After all, of all the movie’s deaths, Gamora’s was probably the most tragic. After saving her sister, Nebula, from Thanos’ torture, Gamora then got pushed off a cliff by her evil father-figure so he could receive the Soul Stone and ultimately destroy half of the population. It was a dark movie for Gamora, especially considering that flashbacks show how her parents were killed by Thanos in the first place, and the ways in which the wannabe demigod manipulated her to trust him. 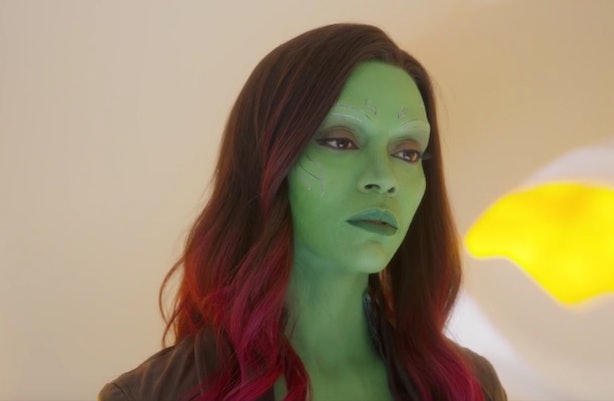 Gamora originally thought that her life couldn’t be traded for the Soul Stone because she couldn’t believe that Thanos actually loved anyone at all, but it turned out that he loved her, or at least he loved her as much as he could. While most of the Avengers tried to sacrifice themselves for their beloveds, Thanos did the exact opposite, proving how set on world-domination he was.

That world-domination came at a high price for Thanos, but there are a lot of reasons to remain hopeful that some of his damage won’t be everlasting. For one, the signal that Nick Fury sent in the end credits scene indicated that Captain Marvel (Brie Larson) was called to the scene. While you’ll learn a lot more about her in the standalone origin story, set to come out Mar. 6, 2019, you can at least glean some hope from the fact that someone was called to save everyone who Thanos killed by snapping his fingers.

Should Captain Marvel help the surviving Avengers — which happen to be most of the original crew and a few additions like Okoye (Danai Gurira), fortunately — the leading theories suggest that Avengers 4 will involve time travel to right Thanos’ wrongs. That doesn’t mean that everyone will come back, but it definitely seems likely that most of the Guardians of the Galaxy will somehow get resurrected, including Gamora.

Right after Thanos snapped his fingers to use his Infinity Gauntlet at the end of Infinity War, he had a weird vision that he was with a young Gamora. Thanos’ adopted daughter asked him if the destruction was "worth it," and he tells her it was. Then, Thanos went to a different planet and sat on a hill, watching the sunset. Whether Gamora comes back as that young girl or as Saldana’s portrayal of the character, it seems likely that the green superhero will come back in Avengers 4. The other green superhero, Hulk, on the other hand will most likely be absent yet again.