But officials from the Department of the Prime Minister and Cabinet insist the peak group, led by Scott Morrison with state and territory leaders, was always intended to operate as a committee of federal cabinet, with the associated secrecy – an argument already rejected by a federal tribunal. 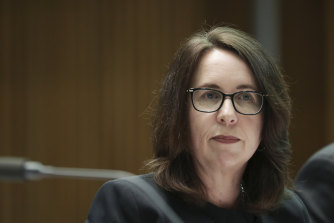 Independent senator Rex Patrick in August successfully appealed to the Administrative Appeals Tribunal (AAT) after PM&C rejected his applications under the Freedom of Information Act for documents about meetings of national cabinet, which was formed in March 2020 to co-ordinate the nation’s coronavirus response.

The Senate is currently debating a bill that would extend the secrecy provisions of federal cabinet to national cabinet.

At a Senate committee hearing on the bill on Monday, the department officials couldn’t say how much taxpayer money had been spent trying to block Senator Patrick’s bid and nor could they point to any harm that had arisen from the release of the documents after he won his case.

Australian Information Commissioner Angelene Falk said while she didn’t believe the extra FOI exemptions were necessary, if Parliament did pass them she would like to see added requirements that some information continued to be made public.

“I note that PM&C’s submission says there’s no intention to resile from publishing statements after national cabinet and so on, but I think that a legislative requirement would give greater certainty,” Ms Falk told the committee.

This should include minutes or a summary of the meeting and documents that had informed decisions, such as the Doherty Institute modelling underpinning the national reopening plan, when they had finished being considered.

Leonie McGregor, the head of PM&C’s cabinet division, cited the release of the Doherty report as an example of existing transparency.

“There is a very great degree of communication around the outcomes that national cabinet has reached – more so than many other cabinet committees, I would say,” Ms McGregor said.

Ms Falk was also worried that the way the legislation was drafted meant the Prime Minister could declare any body a committee of cabinet, giving it a cloak of secrecy.

“What we are saying and what this legislation … is seeking to do is give effect to the government’s decision in March last year to establish a committee of cabinet,” Mr Reid said.

Labor senator Tim Ayres grew frustrated with the officials, asking: “Why should the Senate be persuaded by a set of arguments that Justice White rejected entirely?”

Senator Patrick noted the department had claimed both to the court and again to the committee that releasing national cabinet minutes would cause harm and asked what that had been.

“I’m not sure I could point to specific harm that’s been a result of those releases but I’ll take it on notice,” Mr Reid said.

“The department made a claim there would be harm … we’ve now got documents that are in the public domain. Are you guys just making stuff up?” Senator Patrick replied.

Another senior official, Lee Steel, said the decision had created a lot of uncertainty in the Commonwealth’s relationship with state and territory counterparts.

“We are trying to manage that uncertainty to not result in harm in terms of having a chilling effect on the discussions that first ministers have in national cabinet,” she said.

These Are All the Bags We Need For Fall 2018

Nomadland Trailer: Frances McDormand Is Primed for Another Oscar