Asked the secret to her six-year marriage with John Legend—a union that inspires countless #RelationshipGoals tweets—Chrissy Teigen told Vogue in 2017, “Taking super sexy photos like this.”

Lest anyone get it twisted, though, the Sports Illustrated Swimsuit cover model promptly popped a set of false monster fangs in her mouth and snapped a grimacing selfie.

Because, let’s be clear, it’s that willingness to poke fun at themselves (and each other) that’s made the 10-time Grammy winner, 41, and the model-turned-television host the envy of the Internet. And the reason why when Teigen joked recently that they were “def breaking up after we can leave the house,” the overwhelming response was, as one fan put it, “OH THE HELL THEY ARE.”

For every list touting all the times the Lip Sync Battle star, 34, took a playful swipe at her husband, there are countless other reasons the couple are as well-matched as they appear on Twitter.

For starters, the parents Luna, marking her fourth birthday today, and 23-month-old Miles haven’t fallen victim to the competitive nature that dooms other Hollywood pair. As Teigen began collecting magazine covers, book deals and hosting gigs, her multi-hyphenate spouse (hello, EGOT!) was “supportive and happy and proud,” she told Cosmopolitan. “I’m with someone who is totally secure in himself. He’s not trying to be anything other than what he is.”

But for Teigen’s sake, the Ivy League grad will happily binge watch The Real Housewives of Dallas. She, in turn, will dive into an MSNBC report he finds enthralling. More than a decade and two kids in—one insider tells E! News the duo feel the May 2018 arrival of son Miles makes their family feel complete, with Teigen musing to E! News, “I got my girl, I got my boy. They’re perfect. I love them”—her top takeaway is surprisingly simple. The key to relationship success, she recently told In Style, is to “make each other’s loves and needs feel important.” 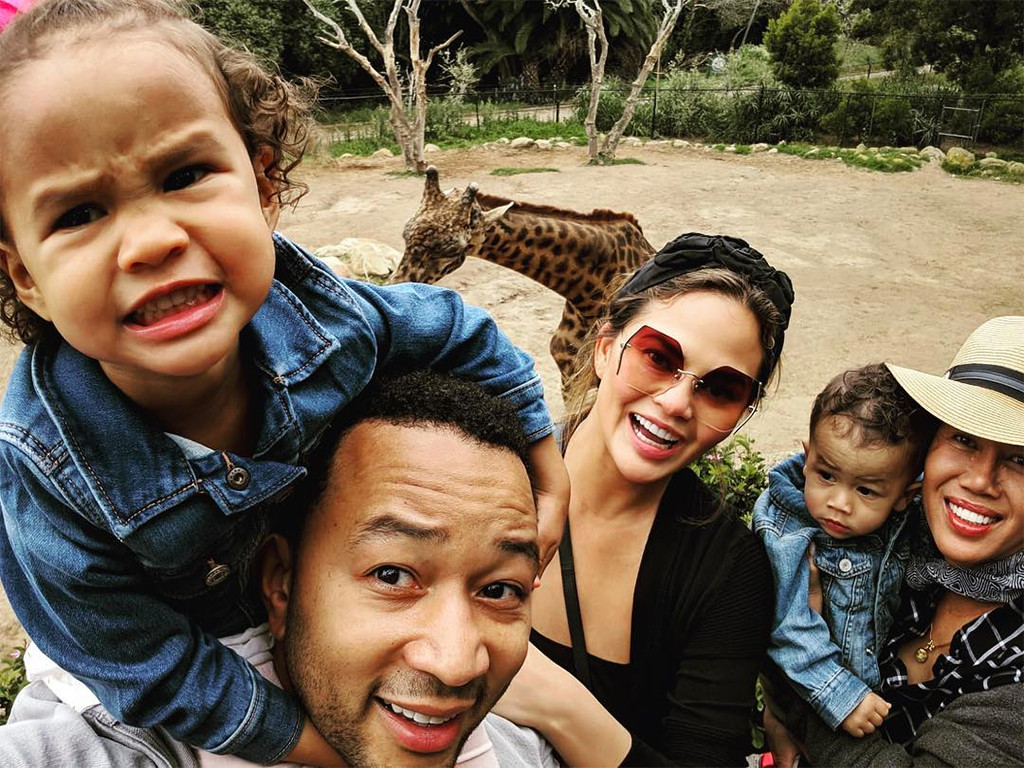 Before their Italian vows, before Teigen gushed to E! News about “absorbing” all of Luna’s “new little steps and new moments,” and how Miles is “just the happiest bug”, they were just two attractive people eating In-N-Out burgers in a hotel room. Back in 2006 rising star Legend (he already had two albums and three Grammys to his name) was on the hunt for a model to film his “Stereo” music video when the director suggested a little-known 21-year-old Billabong stunner.

Arriving on set—precisely seven years and one day before their wedding—Teigen walked into Legend’s dressing room to introduce herself. “He was ironing in his underwear,” she recalled to Cosmopolitan. “I said, ‘You do your own ironing!?’ He said, ‘Of course I do.’ I gave him a hug.”

Throughout the 14-hour shoot, the pair maintained that comfortable banter. “We spent the whole day dancing together, grinding together,” Legend told The Guardian. “And, uh, we made a music video.” 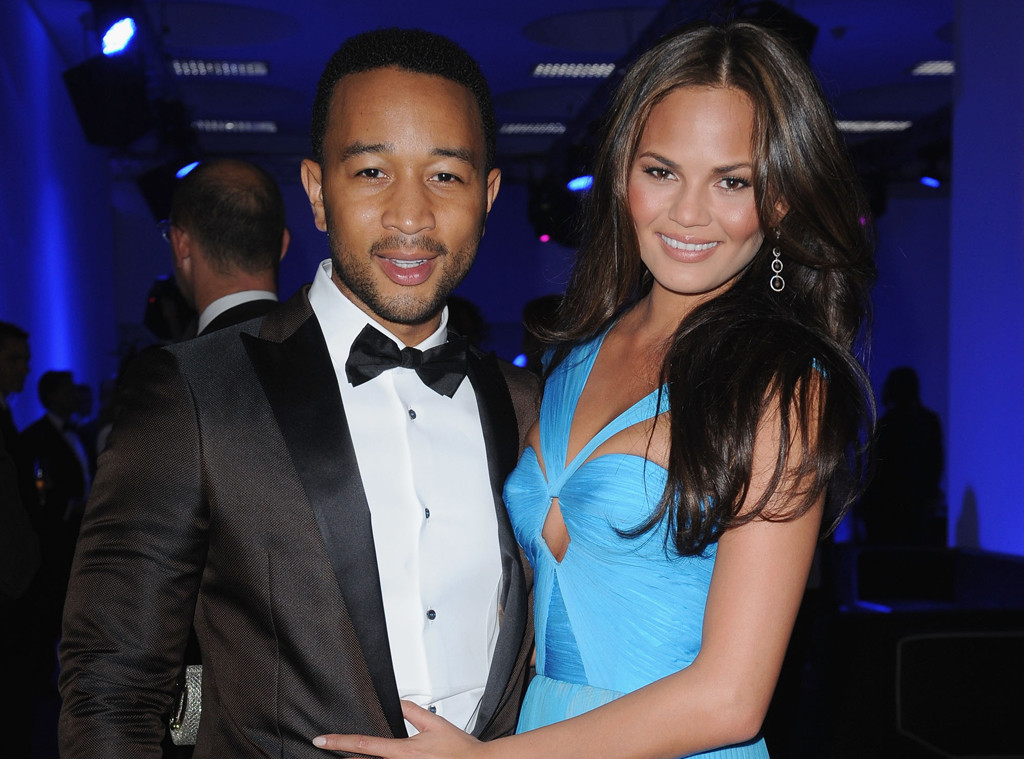 Teigen, as always, was more forthcoming. After returning to his hotel room for a fast food feast, she recalled to Cosmopolitan, “We hooked up.”

So, okay, it wasn’t love at first sight. But, as Legend told L.A. Confidential, he’s far too cautious to dive in like that. “I wasn’t like, ‘This is the woman I’m going to marry,’ from day one,” he said. “For me, I’m the kind of person who needs to grow into that feeling.”

In other words, their romance was relatable from the start, if you ignore the whole meeting-on-the-set-of-a-music-video thing. Also, the fact that their main obstacle was the musician’s upcoming tour.

As they kept in contact via text and phone chats, Teigen was careful not to mention the other women Legend posed with on the red carpet. “I let him be himself for a while,” she explained to Cosmopolitan. “The worst thing you can do is try to lock someone like that down early on, then have them think, there’s so much more out there. I played it cool for a long time. Never once did I ask, ‘What are we?’ Marriage was never my goal, because I’ve never been very traditional. I was just happy to be with him.” 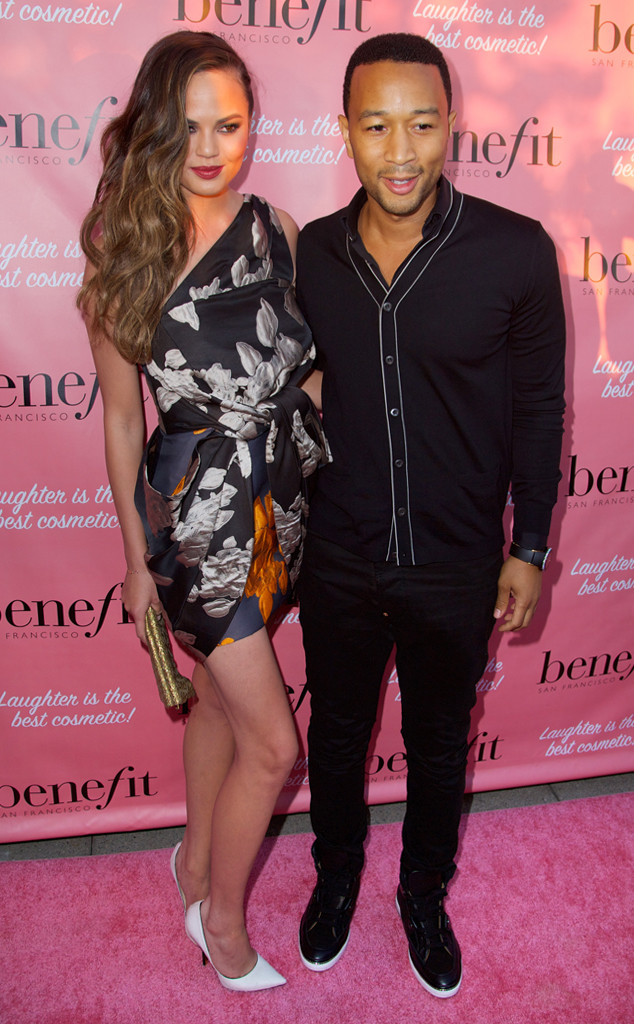 The chemistry was even better face-to-face. When they started dating for real post-tour, “I think that’s when I really started to know that this was the kind of person I wanted to be around a lot,” he said. “Once we started spending more time together between tour stops and all this other stuff, we realized we had such a connection—and then it blossomed into a marriage and a baby.”

Of course it wasn’t quite that easy. After five years of dating—including one half-hour split that Legend chalked up to being stressed and busy on tour: “I was just like: ‘I’d be happier single right now,'” he told The Guardian, “and she was like: ‘No,'”—the singer-songwriter dropped to one knee during a December 2011 holiday in the Maldives. “There was no big grand speech or anything,” Teigen shared on her now-defunct talk show FABLife, “it was just very lovely and sweet.” 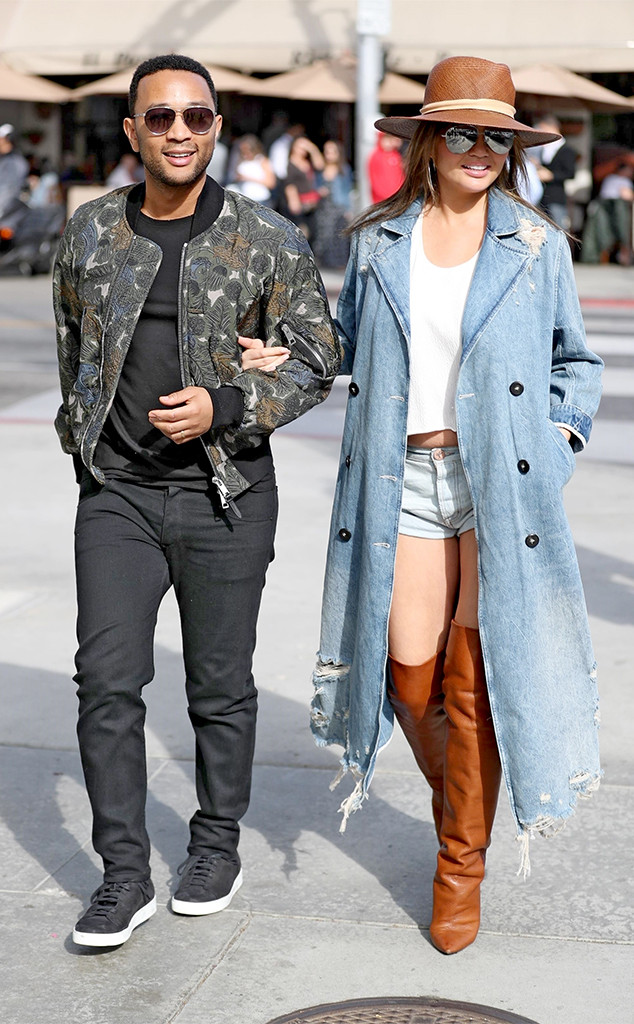 They’ve already endured the “for worse” portion of their vows. Tired of being quizzed about when they’d start producing little Legends, the model, who’s said she’s so open “Sometimes I don’t ever realize I’m oversharing,” divulged the details of their fertility struggle. “I will say, honestly, John and I are having trouble,” she confessed on her talk show. “We would have kids five, six years ago if it’d happened. But my gosh, it’s been a process!”

Two rounds of IVF brought them Luna who Teigen said “sat inside me like a little cross-legged Buddha facing toward my back for nine months.” During delivery, Legend played DJ and as the first lyrics of “Superfly” played, Luna arrived. “I immediately put her on my chest,” she told Glamour. “And she had a face! I was so happy.”

That bliss quickly faded. For months after Luna’s April 2016 arrival, Teigen suffered through undiagnosed postpartum depression. “Most days were spent on the exact same spot on the couch and rarely would I muster up the energy to make it upstairs for bed,” she described in an essay for Glamour. “John would sleep on the couch with me, sometimes four nights in a row. I started keeping robes and comfy clothes in the pantry so I wouldn’t have to go upstairs when John went to work. There was a lot of spontaneous crying.” 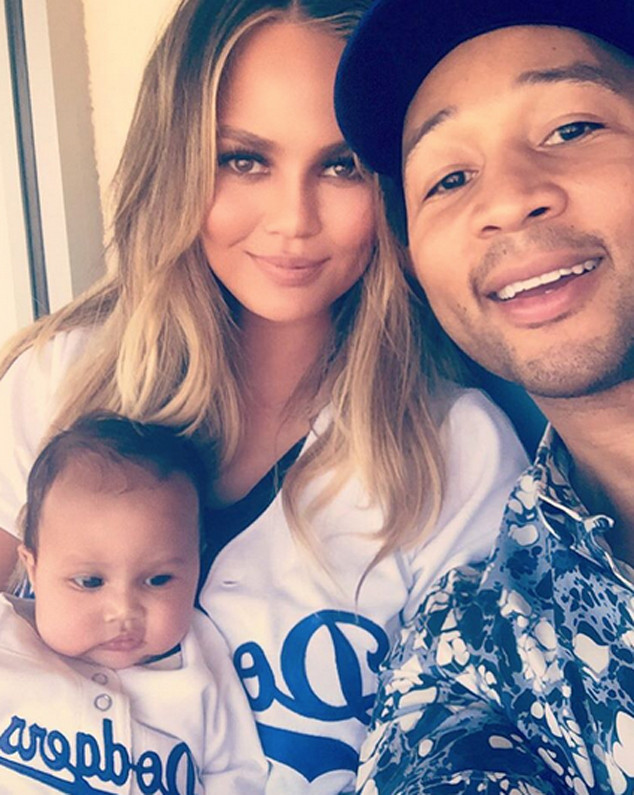 And plenty of comfort from Legend. “He is not the goofiest guy, but he has gone out of his way to indulge my sense of humor,” she wrote. “When I was having a good day, he would go to Medieval Times with me and put on the crazy period hat! He sees how much my eyes light up when he does that stuff, and he knows that’s what I need. I know he must look over at times and think: My God, get it together. But he has never made me feel that way.”

That support—paired with Luna’s general overall adorableness and Teigen’s desire to have a son because “they say that boys just love their mamas”—is what made the Cravings author eager to dive back into pregnancy. “I really want to just knock ’em out,” she told E! News. “That’s my dream, I want to just be pregnant kind of for the rest of my life.”

Well, not quite. “But the rest of my fertile life,” she clarified. “So we’ll see.”

She was prepared should she face postpartum again. “Do I worry about it with this little boy? I do,” she admitted. “But I also know that when it does happen—if it does—I’m so ready for it. I have the perfect people around me for it. That’s why I stand for a real core group of people around me.”

Heading up Team Teigen, as always, is the “Love Me Now” singer. Sure, she’s the first one to take a dig at Legend, “but I will say he is an amazing human being,” she told E! News.

To her, his list of attributes is lengthy. “He has seen me at my worst, but I will say I don’t think I have ever seen him at his,” she has said. “He’s exactly as compassionate, patient, loving and understanding as he seems.”

As if to prove that, he gave E! News his take on Teigen’s postpartum confession, revealing how blown away he was by her op-ed. 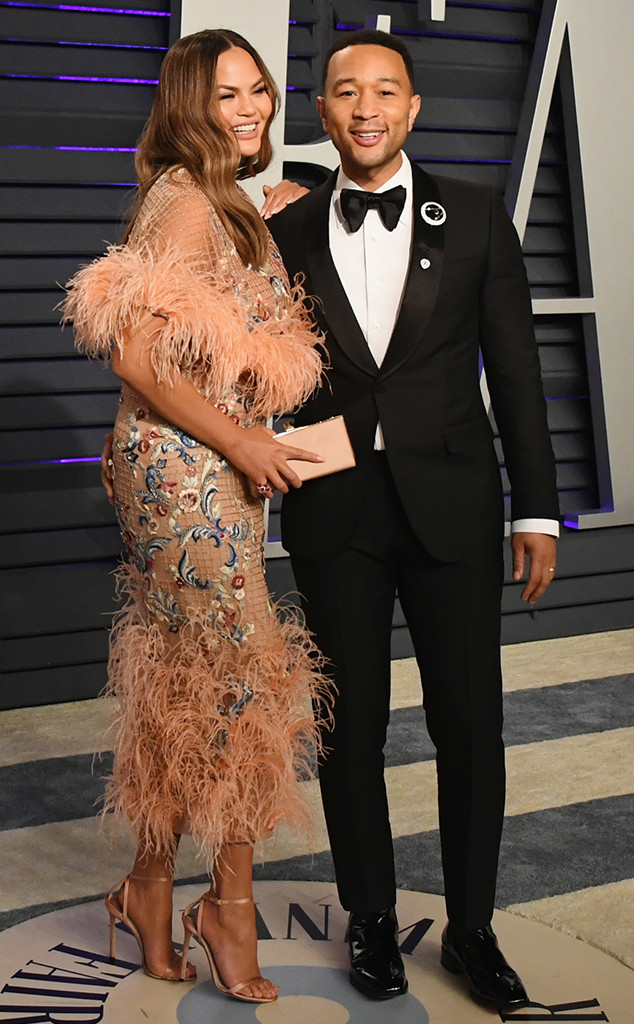 “She showed me the drafts when she was writing it and I knew it would mean a lot to a lot of women for them to see that,” he told E! News at the time. “By acknowledging the pain that she’s going through, in doing that she also acknowledges the pain that a lot of women go through after they have a child. A lot of people don’t want to talk about it. A lot of people feel alone when they’re going through it and for her to let people know that they’re not alone, I think was really powerful.”

No matter what she decides to tackle next, he’ll be hollering from the sideline. “I’m her biggest cheerleader,” he told Vanity Fair in their recent cover profile. “I always think she should do more.” And if some days she’d rather dig into a Real Housewives marathon or recreate TLC’s Four Weddings on a random weekday, well, he’s down for that too.

Because at the end of the day, he knows he got a pretty good draw. “She’s the one. It’s clear!” he raved to People of his wife of nearly seven years. “We have great chemistry. She makes me laugh all the time. She’s a wonderful mother. She’s my best friend.”

Pelicans’ Jaxson Hayes facing 12 charges, including battery against an officer, after July arrest