Home » Lifestyle » Inside the life of Finnegan Biden, 20, whose 'Pop' is Joe Biden

Joe’s secret weapon! Troubled son Hunter Biden’s daughter Finnegan, 20, was a fixture on the campaign trail (even if granddad did seem to think she was his dead son Beau) now what role will she play White House?

Little-known Finnegan Biden may aim to keep a low public profile, but the granddaughter of Joe Biden hit the headlines earlier this week after her ‘Pop’ Joe Biden fumbled while introducing her on election day.

The talented 20-year-old stood dutifully alongside her grandfather Joe as he suffered an  embarrassing gaffe during his final pit stop on election day by introducing her as his late son Beau Biden to a crowd of supporters in Philadelphia.

Yet low-key Finnegan, who currently calls the city home while studying at the University of Pennsylvania, managed to play the moment off and happily cuddled up with her beloved ‘Pop’ in front of the huge crowd.

But alongside her responsibilities at university and her meaningful relationship with her grandfather, who is the fun but studious 20-year-old? 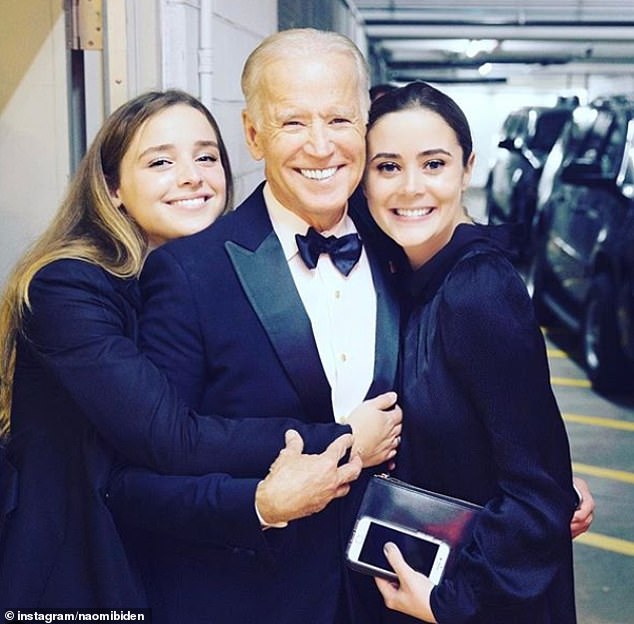 Joe Biden’s granddaughter Finnegan, 20, is an active campaigner on campus at her college and maintains a close relationship with her family (pictured left with Joe and sister, Naomi, 26) 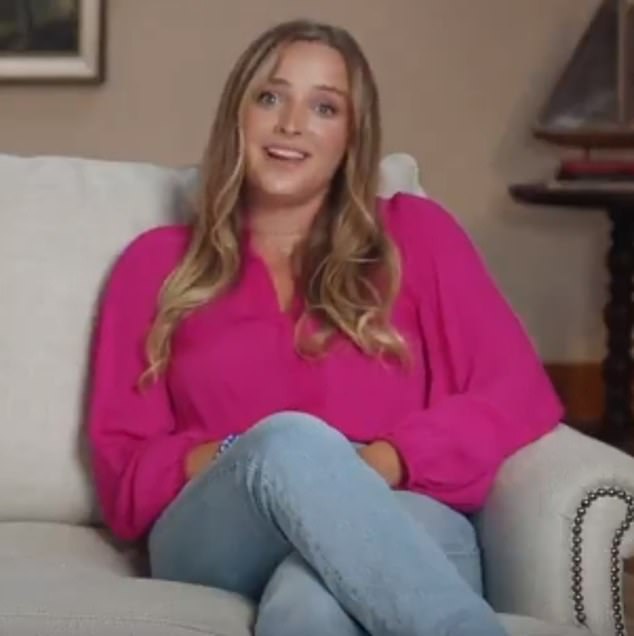 Finnegan, who is currently a senior at the University of Pennsylvania, alma mater of Ivanka and Tiffany Trump, has actively campaigned for change on her college campus 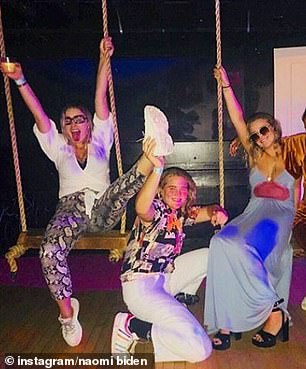 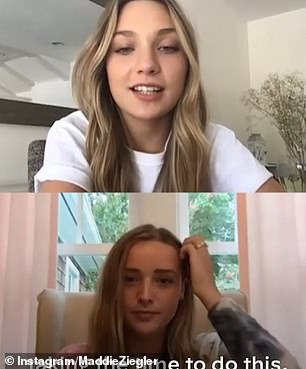 The college student, who has stayed largely out of the limelight over the last few years, has a playful and vibrant sense of style (left) and has been brushing shoulders with celebrities including Dance Moms alum Maddie Ziegler in recent months (right)

Finnegan is the daughter of Robert Hunter Biden, known as Hunter, and Kathleen Buhle, who had three children together before splitting in 2017.

The 20-year-old has both an older sister, Naomi, 26, and a younger sister, Maisy, 18, and makes regular appearances on her elder sibling’s Instagram page, often posing up alongside members of her family, including presidential candidate Joe, for candid snaps.

While Finnegan’s own Instagram page is not open to the public, her close-knit relationship with her siblings and the wider Biden family is clear to see from the man fun-filled photos she features in on her relatives’ accounts.

Both Finn and her older sister Naomi also represent the Biden legacy through their monikers.

Older sister Naomi was named after grandfather Joe’s daughter of the same name who died in a tragic car accident in 1972 when she was one year old. Meanwhile Finn was named after her great grandmother, Catherine Eugenia ‘Jean’ Finnegan, who died at 92 in 2010.

Despite remaining relatively under-the-radar for much of her life, Finn has also not shied away from lending her support to her grandfather during his quest for the presidency. 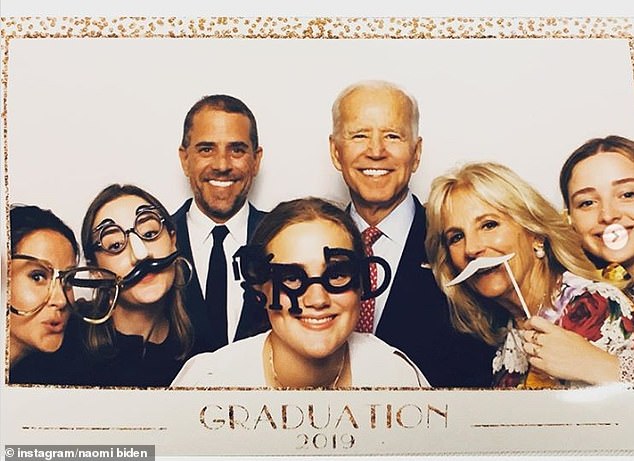 While Finnegan doesn’t have her own public Instagram page, she often makes appearances on elder sister Naomi’s account (pictured, with her grandparents Joe and Dr Jill, father Hunter and sisters Naomi and Maisy at Maisy’s high school graduation last year) 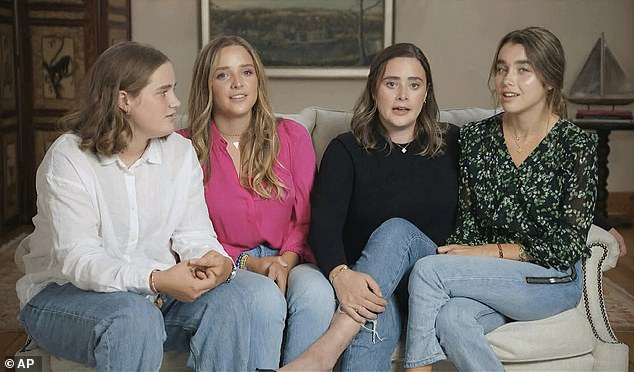 The UPenn student and her sister Naomi recently snuggled up with Joe’s other grandchildren, their sister Maisy, and their cousin Natalie Biden – daughter of Joe’s late son Beau – in a campaign video for the Democrats.

The group appeared in a video montage talking about their relationship with their grandfather and their support for his campaign at the Democratic National Convention.

In the clip, Finn joked about the group being too big to fit onto the sofa all together, before revealing that while she didn’t always pick up her grandfather’s calls, he did phone her everyday to leave her voicemails.

The four young women also shared that the former vice president eats ice cream facing the freezer to hide it, and lives for family togetherness.

As well as appearing alongside Joe at his recent Philadelphia rally, Finn also supported her grandfather on the campaign trail during the primary earlier this year.

She made an appearance during a stop at Iowa’s Clarke University in February and also at a Nevada caucus event later that month.

‘I would like to introduce you to my granddaughter Finnegan Biden,’ Biden said at the Iowa rally.

‘The reason I asked Finnegan — grandfathers are always allowed to embarrass their granddaughters — that goes along with the territory. Her other grandma graduated from Clarke College in the mid-’60s and talks about it all the time.’ 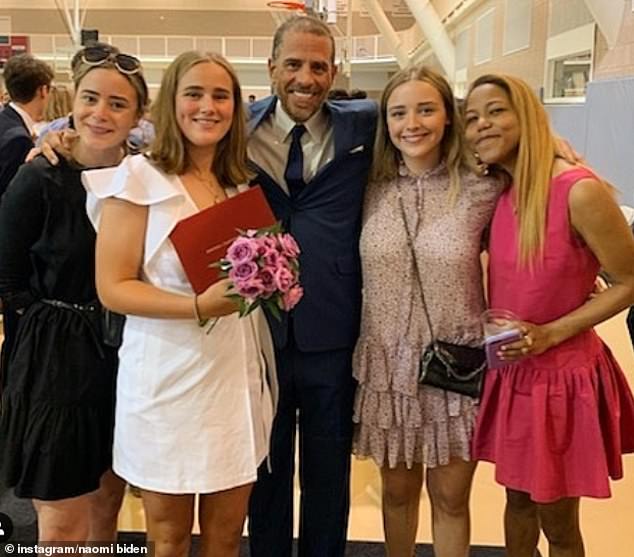 Finn, pictured at sister Maisy’s high school graduation last year, often wears bright and vibrant pieces and has a particular love of pink. She is pictured second from the right 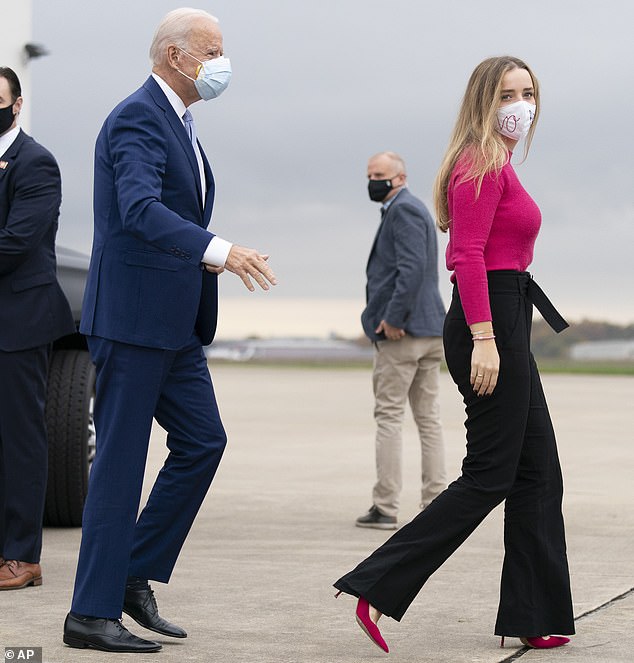 The 20-year-old has been close by during her grandfather’s campaign, recently stepping out alongside the Democratic candidate in a fuchsia sweater and black high waisted trousers

The stunning blonde has a clear love of fashion, and is often seen donning bright and colorful pieces.

With a love of vibrant pinks, the college student has also been spotted opting for funky tie-dye pieces and floaty dresses in recent months.

Last month, the 20-year-old donned for an eye-catching pink midi dress with a cool cartoon print while watching her grandfather take on Donald Trump in the presidential debate.

Both Finn and her grandmother, Joe’s will Jill Biden, put on an incredibly stylish display, with the college student rocking a design from Valentino, while the potential future First Lady chose a floral style from Dolce & Gabbana – a designer that has proven incredibly popular with Donald Trump’s wife Melania. 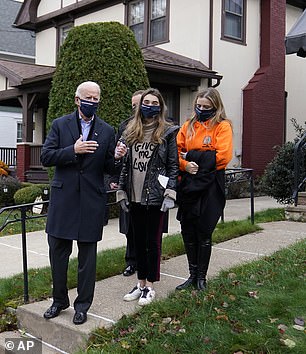 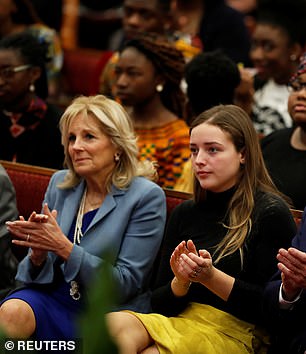 The youngster has a penchant for colorful pieces, having stepped out in a bright orange sweater on election day (left) and a bold yellow skirt in February (right) 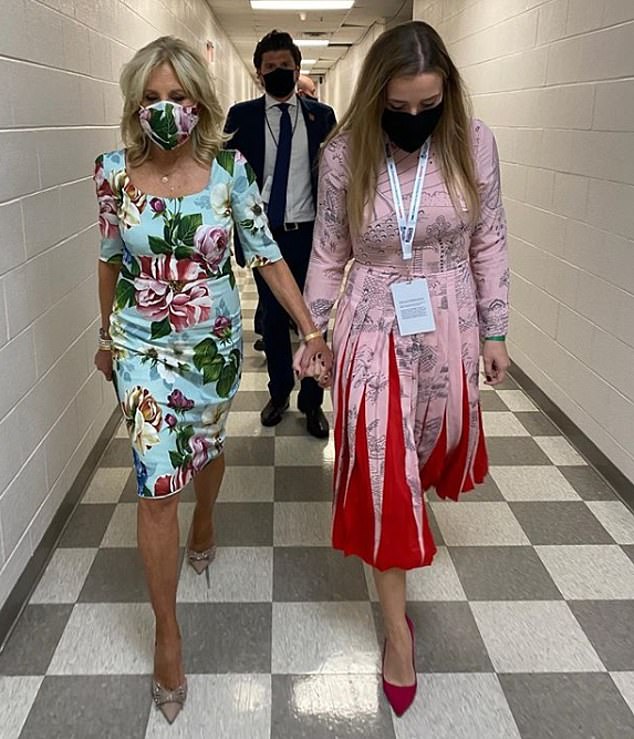 Trendy Finn, pictured with her grandmother Jill, opted for a stunning pink midi-gown to watch her grandfather take on Donald Trump in the presidential debate last month

Yet, despite her love of playful vibrant clothes, the 20-year-old has an ability to keep her outfits elegant by pairing them with more toned down monochrome pieces.

When appearing alongside her grandparents at a church in Charleston in February, she complemented a bright yellow skirt with a more simple black polo neck, while on election day she opted for a similar trick by pairing a fluorescent orange jumper with black trousers.

While Finnegan maintains a relatively low public profile, she has never been afraid to campaign for causes she feels strongly about.

The 20-year-old recently revealed that in high school, she fought to change the dress code, which she viewed as being discriminatory towards female students.

She started a campaign where all the girls in her school came in wearing a T-shirt that said ‘I am not a distraction’. 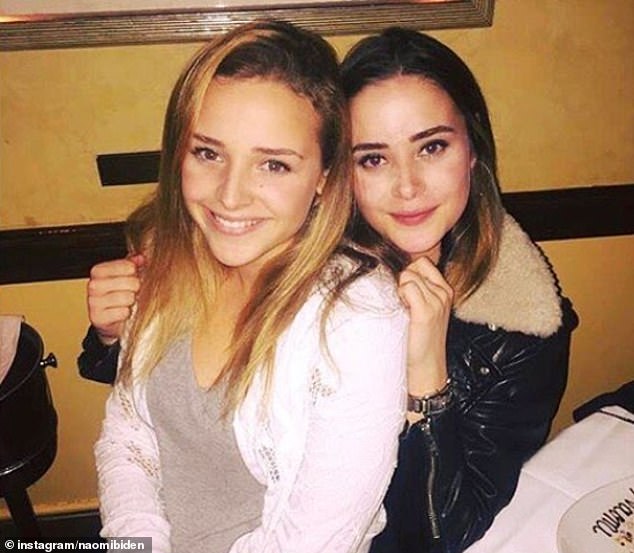 Finn followed in the footsteps of her elder sister Naomi to study at University of Pennsylvania, where she often campaigns for important issues on campus

Finn revealed it was a life changing moment in her childhood, telling 34th Street: ‘That was the first time I actually saw sincere impact [from] something I did because we got rid of the dress code and had a forum at our school about it.’

Meanwhile she has followed in her older sister’s footsteps in attending the University of Pennsylvania, where she is currently a senior. The prestigious college also counts First Daughters Ivanka and Tiffany Trump among its high-profile alumni.

During her time at the college, Finn has proven herself to be more than just a good student – she has also become involved in campus activism; earlier this year, motivated by the concerns of her fellow classmates, she successfully petitioned UPenn’s administration to extend grading options.

Her Change.org petition, which ended up garnering over 3,500 signatures, argued that students at the college were struggling and weren’t in environments conducive to learning.

She continued to describe how early deadlines were harmful to students and pointed out that there were not any foreseeable negative consequences to pushing back deadlines.

In describing why she chose to petition, she explained: ‘I was thinking of ways to enact change and to talk about it productively [so] the school might respond, and [the petition] seemed like the most productive [way] to show the school that the students really did care about this.’ 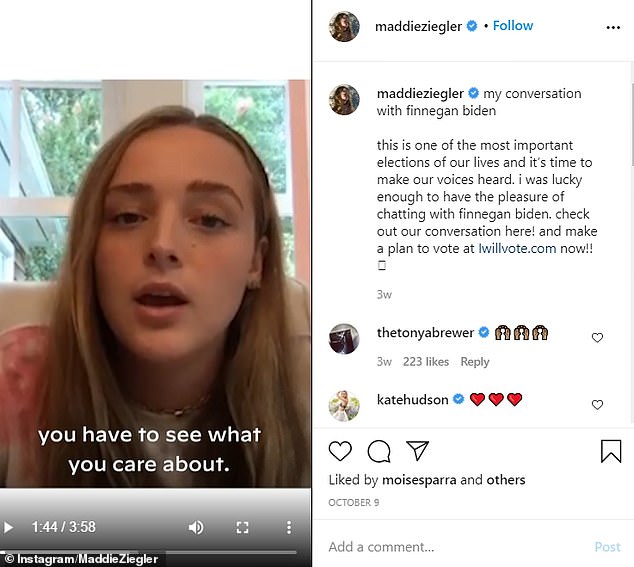 While Finnegan has kept a low-profile over the last few years, an appearance on Dance Moms star Maddie Ziegler’s Instagram page last month could indicate the kind of celebrity she might surround herself with

While Finnegan has kept a low-profile over the last few years, an appearance on dancer and influencer Maddie Ziegler’s Instagram page last month could indicate the kind of celebrity the 20-year-old might surround herself with.

During the virtual chat, the pair discussed voting for the first time, with Finn telling Maddie: ‘It would be a fun way to start off our first time voting if we can make our voice heard in this election.’

Meanwhile she urged others to ‘think about what you care about’, adding: ‘You have to decide on where you stand on these important issues and make your choice about which candidate to support.’

The Biden sisters are also believed to be close to Barack and Michelle Obama’s daughters Malia and Sasha, after their grandfather spent eight years working with the President as his Vice President.

Just like Finn, the Obamas’ eldest daughter Malia, 22, is a senior at an Ivy League college – Harvard – while her younger sibling Sasha, who is just a year older than Finn, is currently a student at the University of Michigan.

If Biden makes it to the White House, it is likely the Obamas will be able to offer Finn any necessary advice about dealing with the spotlight, having been thrust into the public eye when their own father became President in 2008.

Pharmacist took Moderna vials from fridge 'knew it would destroy them'

If You're Flying With Gifts This Season, You May Want to Read This First