Just one year ago the iconic fashion house Jaeger collapsed into administration, leading to the closure of 63 stores and concessions nationwide.

For 137 years it had dressed everyone from Audrey Hepburn to Kate Middleton. Part of British fashion had died.

Then, in January this year, Marks & Spencer saved it and is now unveiling the brand’s comeback collection.

It’s a fitting twist of history. Both companies started in 1884 and have been at the heart of the British High Street ever since.

Marks & Spencer saved Jaeger in January and is now unveiling the brand’s comeback collection, which includes a £225 dress (left) and a stunning navy co-ord suit (right)

Jaeger was founded by Lewis Tomalin, an accountant who had been inspired by Dr Gustav Jaeger, a German professor of zoology who thought clothing made from animal fibres brought health benefits.

The store started with woollen suits, and in 1919 it launched the first camel hair coat. These items weren’t cheap, but the quality of the fabrics and design meant that they would last decades.

Then Jaeger did what so many brands did — it attempted to be trendy. In 2005, it launched Jaeger London, and by 2008, it was on the schedule at London Fashion Week.

In this strategy were the seeds of its demise: it had become distracted from the needs of its core customer.

But now the brand is back, with managing director Fiona Lambert, who co-launched George at Asda as the first supermarket fashion brand.

I’m relieved to see she has returned to the key values of the label — beautifully crafted pieces, many of which come straight from the store’s archives.

There’s a midi skirt in a bold green print (right), and just look at that vivid jumpsuit (left)! 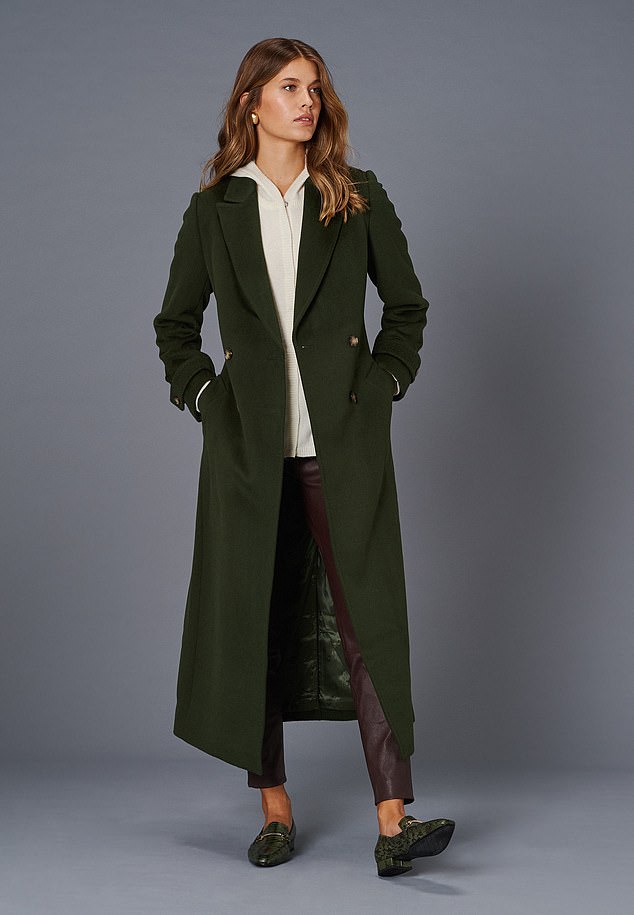 The camel hair original is back. Yes, it has a price tag of £499, but this is a once-in-a-lifetime buy.

The green military design is 100 per cent wool and slightly more affordable at £399. Top of my list is the peacoat.

The knitwear is, unsurprisingly, brilliant: check out the navy co-ords.

Then there’s a patterned silk shirt dress with a belted waist: the open slit means it works for day, but with heels can be turned into something just risque enough for the evening.

There’s a midi skirt in a matching print, and just look at those burgundy leather trousers!

These pieces come together to create a classic wardrobe, and with everyone’s concerns about fast fashion, there’s a growing gap in the market for clothes that last.

The only catch? For Jaeger to succeed this time, we’ll need to see if people are able, and willing, to pay for that.

Jaeger’s AW21 Capsule collection launches at marksandspencer.com on Wednesday, with a select rollout to Marks & Spencer stores from October 28.

US government considering ban on TikTok because it is Chinese

How BAZAAR: Surf’s Up with These Burberry Boards

Christina Anstead Has Something To Say About Her Weight