The number of Australians dying each year is expected to double by 2050 as the population ages but the palliative care sector says access to services is a “postcode lottery” that must change.

Demand for palliative care services, particularly to help people die at home, has increased significantly during the pandemic – by more than 60 per cent in some areas. 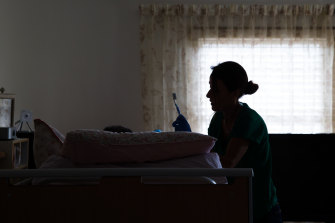 There has been a huge increase in demand for palliative care services and the sector says it needs a significant funding boost.Credit:Janie Barrett

This is partly due to a reluctance to go to hospital where family might not be allowed to visit, and partly because delays to routine health checks during restrictions or lockdowns have meant people are being diagnosed in more advanced stages of disease.

“People who traditionally would have stayed in an in-patient palliative care unit or stayed in a ward because their visitations are restricted and they can’t have their family members around them, they choose to go home,” says Kelly Rogerson, chief executive of Victorian service Palliative Care South East.

“Because nobody wants to be in hospital, it has really changed the culture … of what the general community wants.”

The surge in demand is expected to continue to rise over the next few years as the impact of people delaying health care during the pandemic flows on.

But even before the pandemic hit, services were stretched, peak body Palliative Care Australia says.

National data shows palliative care services looked after more than 30,500 patients during the first half of 2021. Five years earlier, they had 19,100 patients.

There were more than 14,100 deaths of palliative patients between January and June 2021, with more than one in five dying at home. More than two-thirds died in a hospital or hospice. More than half the patients were aged 75 or older.

Palliative Care Australia is asking all parties at the coming federal election to commit to a $575 million annual boost to the sector, arguing it is needed to sufficiently increase the workforce, hospital beds and community services available.

“It’s not just because of COVID – I think that’s really highlighted the problem that we have in that we’re getting this greater demand – it’s also that we’re expecting the number of people in Australia to die to double in the next 20 years.”

Ms Rowland said while the federal government had made some announcements last year, there had not been any significant new financial commitments.

The federal Health Department pointed to funding in May’s budget of $37.3 million over four years to expand an at-home palliative care program and $21.4 million over three years for relevant training and education in the aged care workforce. This was on top of $57.2 million announced in 2018 for a six-year program to improve access to palliative care in residential aged care.

“There is no available data to support the claim of increased demand for palliative care over the past two years,” a department spokeswoman said.

“The National Palliative Care Strategy 2018 articulates a cohesive national approach and shared direction for the development and delivery of palliative care across Australia. The strategy is being implemented by state, territory and Commonwealth governments, guided by a nationally agreed implementation plan.”

Ms Rogerson’s community palliative care service, which works in a region covering more than 1 million people, is facing a more immediate problem: its lease has ended at its previous premises and it needs $4 million to build a dedicated home that would include clinical and counselling rooms.

She has been lobbying the Commonwealth and Victorian governments to split the costs, with a business case prepared in 2019, but so far neither will commit.

“We’ve been running sausage sizzles, and I’m spending my days turning sausages and it’s crazy … I’ve got nurses on the weekend out there turning sausages to be able to fundraise,” she said. “But we’re not going to get that kind of money fundraising, we need a commitment [from government].”

Federal Labor MP Julian Hill has also supported increased funding for services after realising the importance of palliative care while helping his mother to die at home.

“Palliative care is not something that politicians want to be talking about when we want to focus on talking about health care because no one likes to be reminded of our mortality,” he said.

“I nursed Mum myself for 10 months with incurable cancer and we made the decision for her to die at home with me and those she loved. It really is a privilege to help someone who you love to die but to do it well and with dignity you need the support of palliative care services.”

Bill Gates warns future pandemics could be even worse than Covid

How to Watch the Emmy Nominations Live Online