My mother’s home burial was ‘carnage’, says Kirstie Allsopp as she warns against people leaving detailed funeral instructions for family members after they die

Kirstie Allsopp has warned people against leaving detailed funeral instructions for family members after they die as she called her mother’s home burial ‘carnage.’

In an interview with Times Radio to be broadcast today, Kirstie has recalled the challenges of following Lady Hindlip’s funeral plan, saying: ‘I wouldn’t recommend it to anyone. I think there’s a reason that we hand over the bodies of people we love to people who are specialists in that field.’

Kirstie said she and her siblings struggled following her mother’s planning, finding they couldn’t dress her body in her assigned outfit, adding: ‘It is a little bit a tyranny feeling that someone has left these very strong instructions that you must adhere to.’ 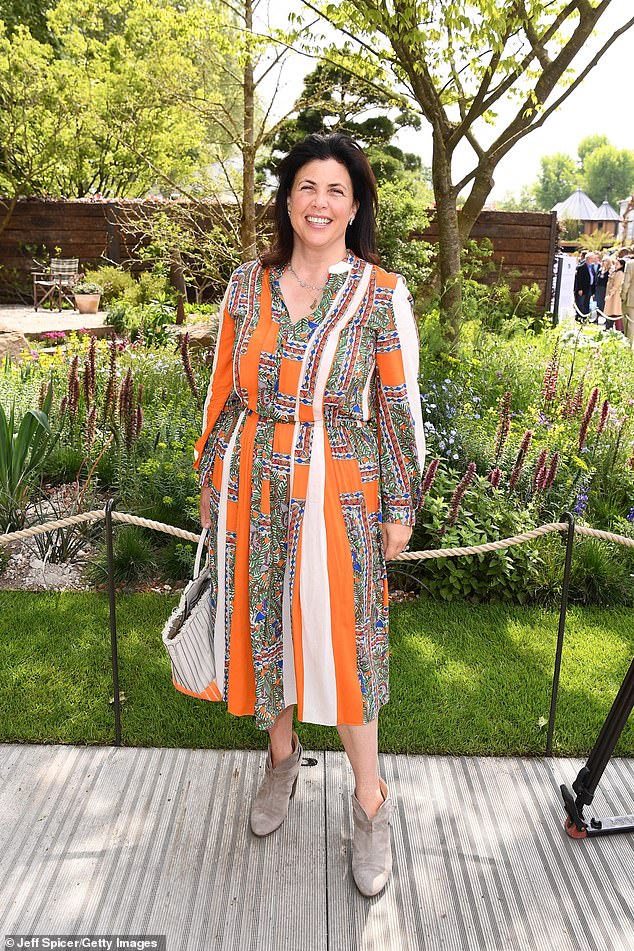 Kirstie Allsopp, 48, has criticised the ‘tyranny’ of people who leave detailed funeral instructions for family members

The day after her death, Fiona was placed in a wicker coffin, lifted on to the back of a tractor and driven up the garden where she was buried next to Benji, the family pony.

According to Kirstie, this was the way that Fiona wanted to be buried when she died – a simple, discreet ceremony and surrounded by her closest family.

But she has now revealed how it was a challenge for the family to oblige by Lady Hindlip’s final wishes.

Before her death, Lady Hindlip had left a detailed plan about her funeral in an attempt to help the family. 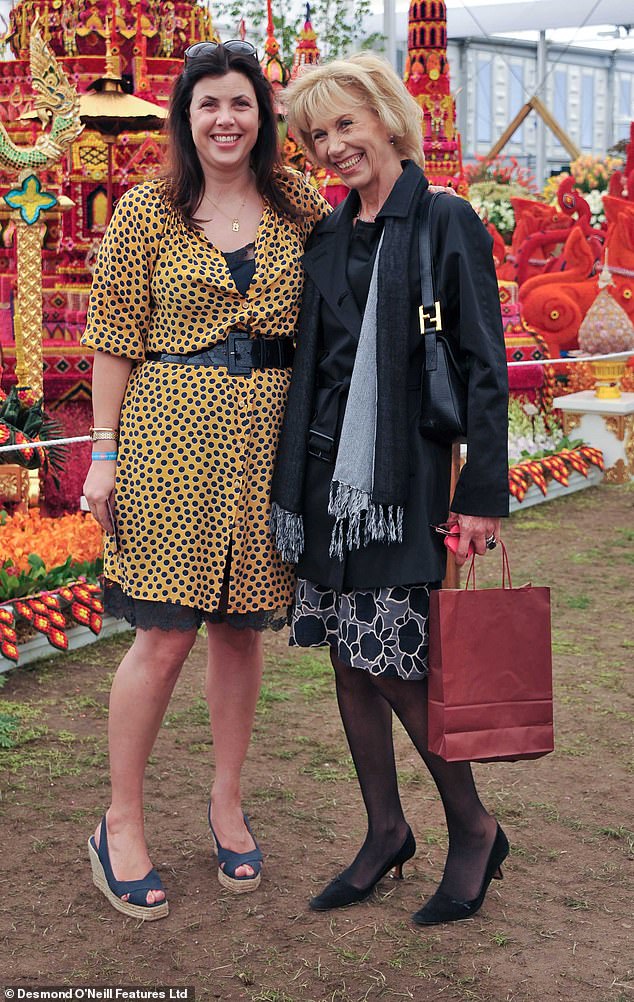 She organised a hole to be dug in the garden but, after dying during a rainy winter season, the grave was filled with water.

The TV presenter explained it was ‘like a plunge pool.’

Meanwhile the family were forced to pick an alternate outfit for Lady Hindlip to be buried in after they couldn’t dress her body in the clothes she had requested.

On the day of the funeral, the coffin was put in a trailer on the back of a tractor and driven out to the garden.

Kirstie continued by recalling how everyone had their ‘smart clothes on’ but were forced to wade through ‘knee-deep mud’ in wellington boots. 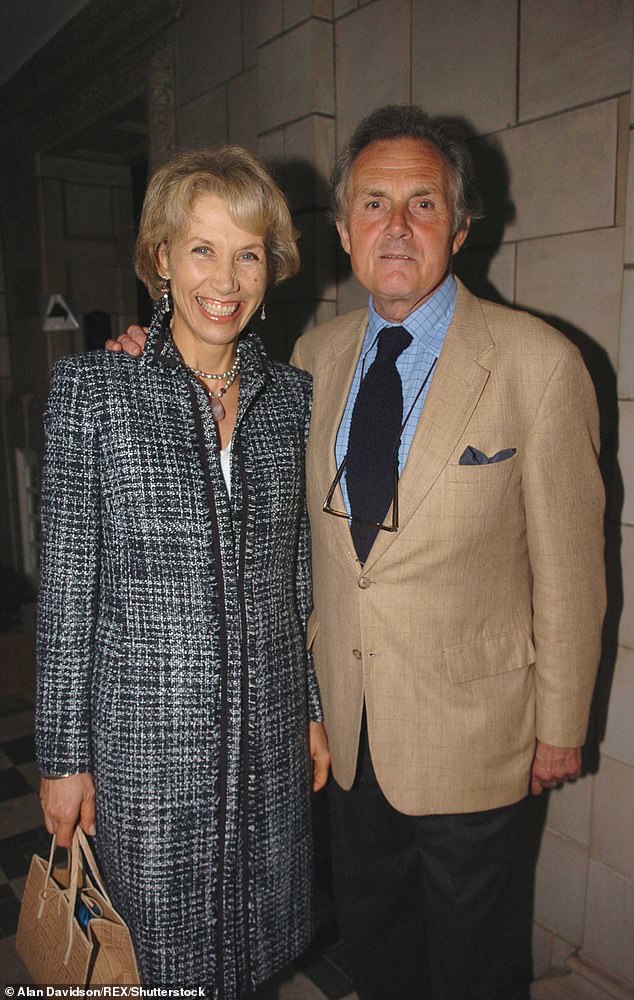 Lady Hindlip made arrangements for her funeral before her death, including buying a wicker coffin and digging a plot in her Devon garden (pictured, with her husband Lord Hindlip in 2005)

The Location, location, location star, who has previously spoken about drinking a ‘copious amount’ after her mother’s death, said she is now able to see the dark comedy of the day.

She explained: ‘I can describe it in a completely humorous way but it was just fantastically dark and British.’

Kirstie, the eldest of four, was 17 when her mother discovered she had breast cancer.

Lady Hindlip, an interior decorator, subsequently endured a mastectomy, lumpectomy, a hysterectomy, had her liver taken out, several rounds of radiotherapy and chemotherapy.

She died just a few months after Kirstie disclosed that her younger sister Sofie, also a TV presenter, had undergone a double mastectomy to lower the risk of developing breast cancer, which has afflicted the family’s female relations for generations.

The TV star watched her mother stoically tackle cancer for 25 years, but realised the 66-year-old was dying when they discovered she had bought a coffin and hidden it in the attic.

For one or two burials on private land, permission is not needed.

Permission is required if a grand monument is erected (such as a mausoleum).

The land owner should check with their solicitor that there is no covenant on the deeds to the land that could prohibit the burial, and also check that no bye law is being broken.

Thought must be given to how long the chosen site will remain in the ownership of the deceased’s family because unless restrictive covenants are put in place by a solicitor, future owners could exhume the body (with permission from the Home Office) and bury it elsewhere, or refuse access to the grave.

Home burials are cheaper than a conventional one, but having a body buried in the garden may reduce the value of the property.

The burial site should be on land with a deep water table and be sufficient distance from watercourses so as not to pose a pollution threat.

Having any grave near a water source is a concern for the Environment Agency from a possible contamination angle.

– The site should be more than 30 metres from any spring or any running or standing water.

– It should also be more than 10 metres from any ‘dry’ ditch or field drain.

– The site should be at least 50 metres away from any well, borehole or spring that supplies water for any use.

– When preparing the grave, make sure there is no standing water when it is first dug and that the grave is not dug in very sandy soil.

– There should be at least one metre of soil above and below the body after burial.

Electrical and other services must be avoided.

There is a requirement to record the burial on the deeds to the property, in accordance with the Registration of Burials Act 1864.

A location map must be attached to the deed to confirm the position of the grave and details of the name of the deceased, age, date and place of death should be recorded.

This will reduce the potential complication of the Police being called if human remains are discovered during future garden maintenance or building work.

Any prospective buyer should have the right to know that someone is buried within the grounds of the property.

A certificate for burial issued by the Coroner or Registrar of Birth and Deaths (called the green disposal) will have to be obtained and any other procedural matters of the Registrar satisfied.

If there are any serious infectious disease concerns relating to the deceased person, then you must also inform the local Environmental Health department.

Why your Samsung, Sony and LG 4K TV will look hugely inferior this month

Model claims she was banned from Tinder for being 'too hot'