Labor has called on the Morrison government to guarantee a proposed Chinese fishing facility on Australia's doorstep will not threaten national security and deplete the area's fish stocks, saying it has "clearly dropped the ball".

Chinese company Fujian Zhonghong Fishery Limited has signed a memorandum of understanding with the Papua New Guinea government to build a $132 million "comprehensive multi-functional fishery industrial park" on the island of Daru under Beijing's Belt and Road Initiative. 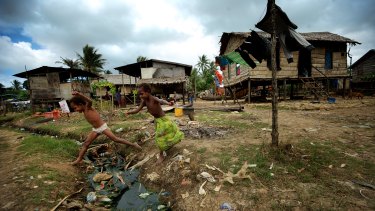 Daru Island, where China proposes to base a new fishery, is very close to Australian waters in the Torres Strait.Credit:Jason South

Daru, one of the few Torres Strait islands that do not belong to Australia, is just a few kilometres from Australia's maritime border and less than 200km from the Australian mainland.

Australian fishers are worried the project will deplete fish stock in the Torres Strait, while security experts have raised concerns the facility could be used for military purposes.

Australian government sources conceded there was some concern with the project, particularly the depletion of fish stocks in the area, but insisted the project still has a long way to go before being approved.

"How did the Morrison government not see this coming?" Senator Wong said. "Scott Morrison talks a lot about protecting our sovereignty, but this episode raises serious questions about whether he's actually delivering what he says. Someone in his government has clearly dropped the ball here."

Opposition spokesman for international development Pat Conroy said the federal government had "diminished Australia's standing in the Pacific and undermined our interests in a stable, secure and prosperous region – leaving a vacuum for others to fill".

The MOU between the company and PNG was announced by China's Ministry of Commerce, suggesting the project is sponsored by the Chinese government.

He said the PNG government and the people of Daru needed to explain what would happen when the fish ran out.

"There is no good answer to that question, and that is what is ringing alarm bells about other purposes for the facility, which must involve port facilities for fishing vessels," Mr Shoebridge said.

"It may just be a case of a rapacious Chinese fishing industry that simply wants to fish wherever it can, and is hoping that local PNG regulators will let it do whatever it wants to get the investment. The problem is that the Chinese state connection makes what happens after the fish run out not just a question of financial distress, closure and enduring local damage."

Trump declares state of emergency in Florida ahead of Hurricane Dorian

Does this prove that Love Island's Grace Wardle isn't being genuine with Dr Alex George?

Your Daily Horoscope for Wednesday, June 27