Labor is demanding the Attorney-General’s Department explain why it appeared to calculate the cost of an opposition plan to let workers transfer accumulated leave between jobs, arguing it let itself become politicised. 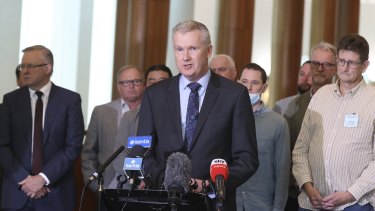 “We are… concerned you have not dissociated your department from this discredited exercise which is not in keeping with the apolitical role of the Australian Public Service,” Mr Burke wrote to the department’s acting secretary, Iain Anderson, in the letter seen by this masthead.

A day after media reported Labor leader Anthony Albanese would announce a plan to let “insecure workers” take paid leave with them from job to job earlier in February, Mr Porter attacked the plan as a “tax” on businesses of up to $20 billion annually.

The figure was based on an analysis by Mr Porter’s department, which he referred to, of the cost of giving all independent contractors and casuals paid leave that Labor was forced to clarify was not its intent.

In the letter, Mr Burke said the figures had been “misrepresented as costings associated by the opposition’s Secure Australian Jobs Plan”, pointing out the figures were released before the plan was formally unveiled by Mr Albanese.

Both sides of politics have used the public service to provide cost estimates on their opponent’s policies when in government, often in the form of asking for a price on the likely constituent elements of a policy rather than a policy itself.

Mr Porter said in a statement that the government costed the scenario of casuals and contractors getting paid leave “because we were concerned that would be an extinction level cost for business”.

“It is not a matter of costing Labor’s policies because they can’t even be clear on what their policy is,” he said.

An unnamed media officer at the Attorney-General’s Department confirmed the letter had been received and the department would reply, but did not respond to Mr Burke’s contentions.

Labor was burned at the last election by false claims it wanted to institute a “death tax”, also known as an inheritance tax, which were circulated online despite it not being an opposition policy.

Smart folio-style keyboard that is also a workhorse

Trump says if Biden were president China would own the US

Rich kid ‘rioters’ are ignorant about the poor working class