Harry and Meghan go mini! Legoland spends 600 hours building a toy version of the royal wedding, complete with a replica of Windsor Castle, royal guards, and a little Lego QUEEN

The upcoming royal wedding between Prince Harry and Meghan Markle is going to be a truly larger-than-life affair — which is perhaps why Lego decided to make a much, much smaller-than-life version of it.

Legoland Windsor has created its own version of the upcoming nuptials made entirely out of Legos, using a whopping 39,000 bricks in the process.

This is the first time the group has made a permanent structure for a royal event, and it took nearly 600 hours to create the exhibit — which features a replica of the Windsor Castle and mini Lego versions of many members of the royal family. 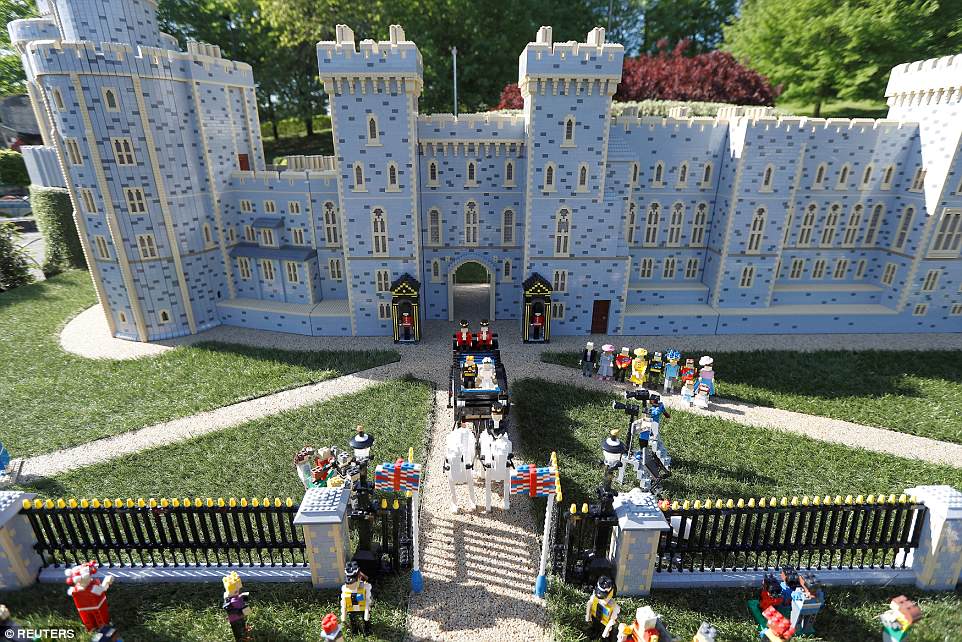 Astounding: Legoland Windsor created a replica of the royal wedding that took nearly 600 hours to make 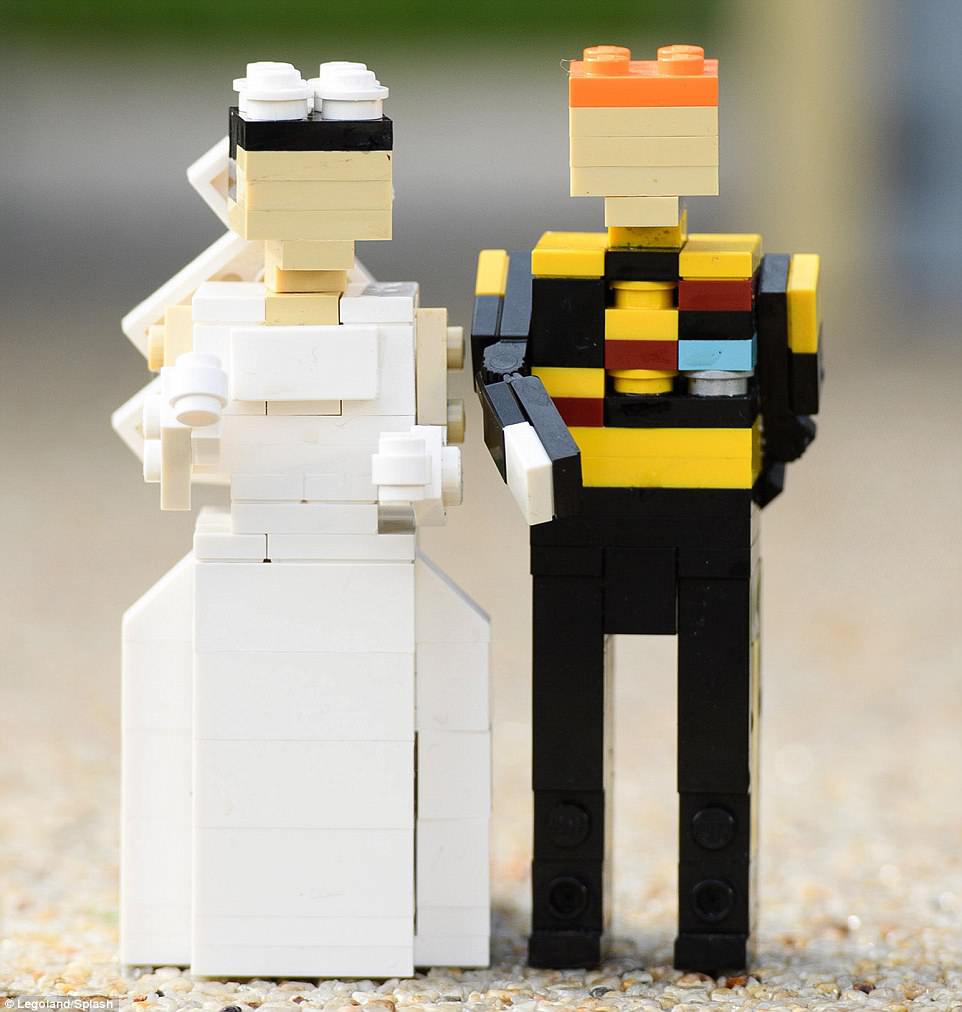 Lego-sized: Meghan Markle and Prince Harry got the Lego treatment for the scene and were displayed in their wedding outfits 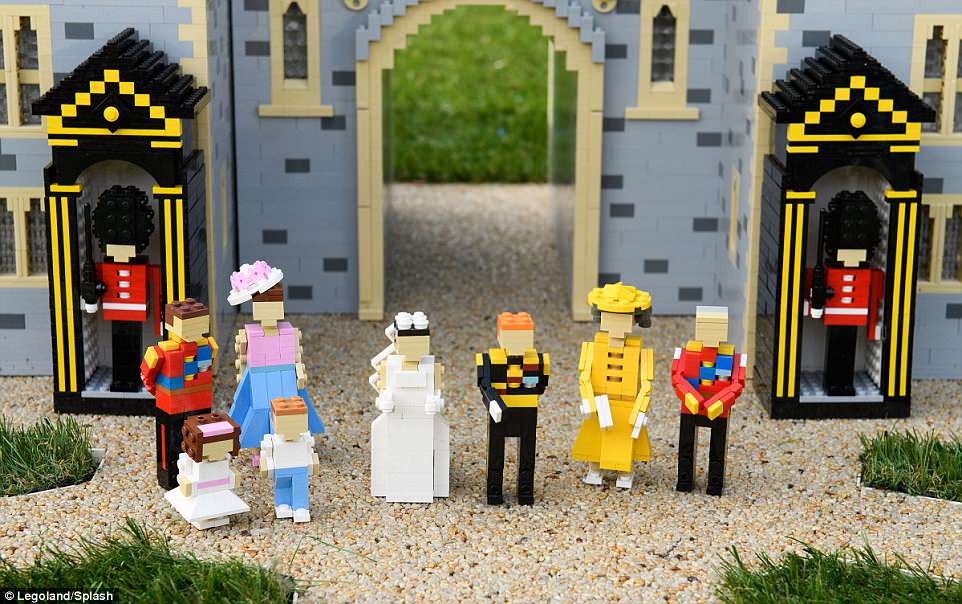 There were 11 model makers enlisted for the daunting task of creating a miniature version of the upcoming royal wedding for the Lego exhibit.

Each royal member is so intricately detailed that people can make out the blue sash with medals across Prince William and Prince Phillip’s chests.

Included with the castle and the royal family is a tiny Ascot Landau carriage, which was made out of 1,500 bricks.

Surrounding the elaborate castle and the royal family is a crowd of about 500 Lego people, who were made out of 17,00 bricks.

In the crowd are the Spice Girls — two of whom said this week that they were not actually invited to the affair, despite rumors that the group would perform — as well as other well-wishers.

An array of Lego spectators are placed at a distance away from the castle gates as they vie for their own shot to view the royal couple.

These spectators are clothed in bright-colored bricks, and Lego Union Jack flags are seen hanging over their heads. 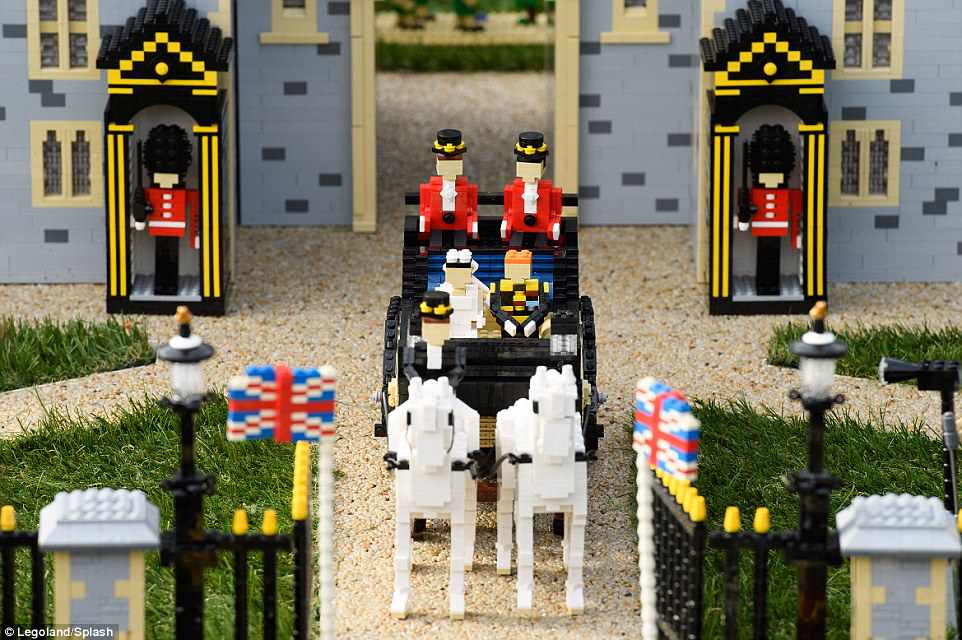 Marriage bliss: Legoland Windsor advertised its new exhibit with a series of photos showing the Lego wedding. It took 11 model maker to create the exhibit 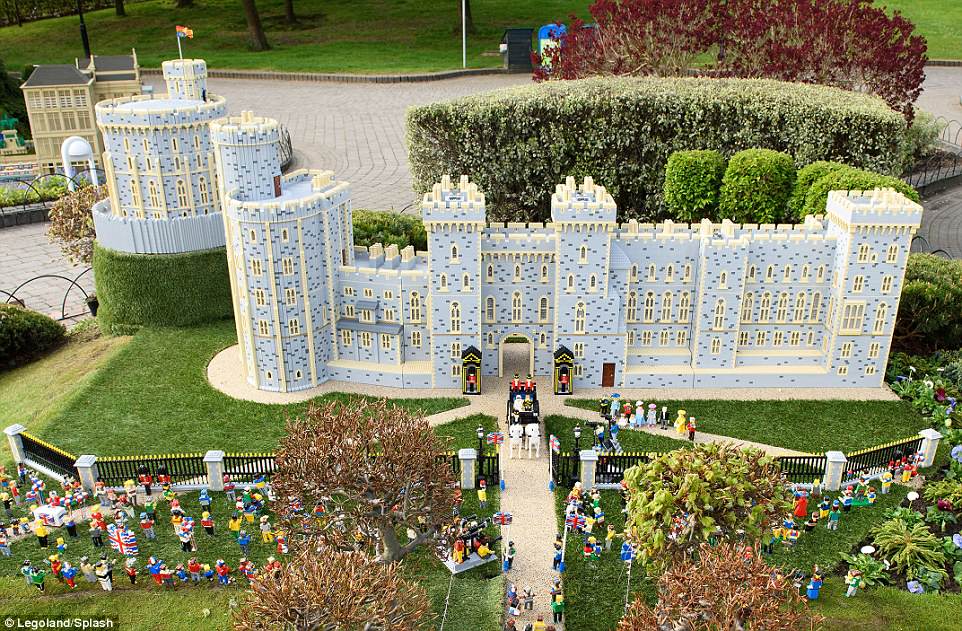 Phenomenal: More than 39,000 Lego bricks were used to create the castle, royal family, and spectators 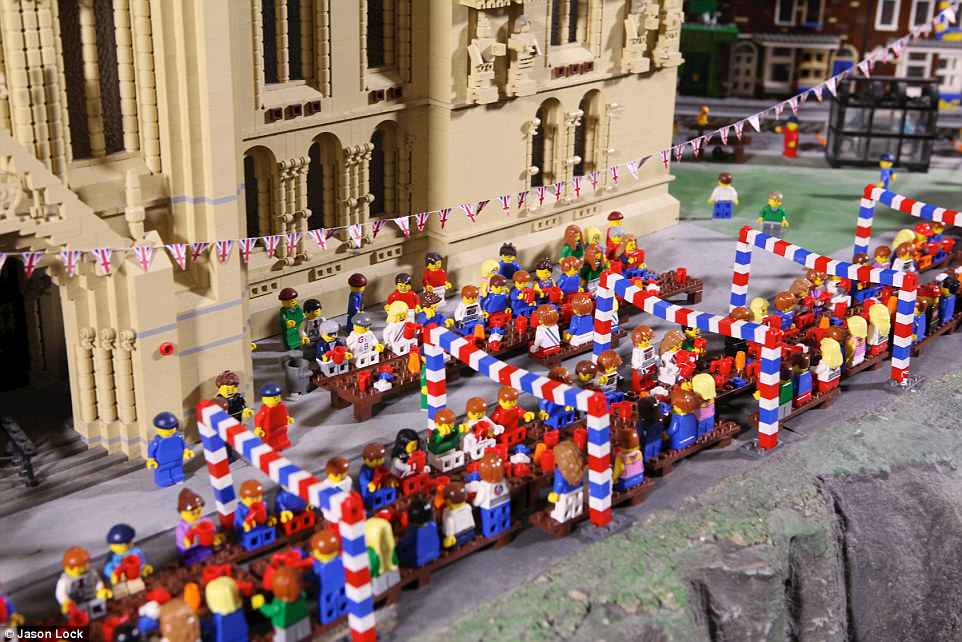 Excited: The exhibit even includes a crowd of spectators vying for their own glimpse of the royal couple outside the castle 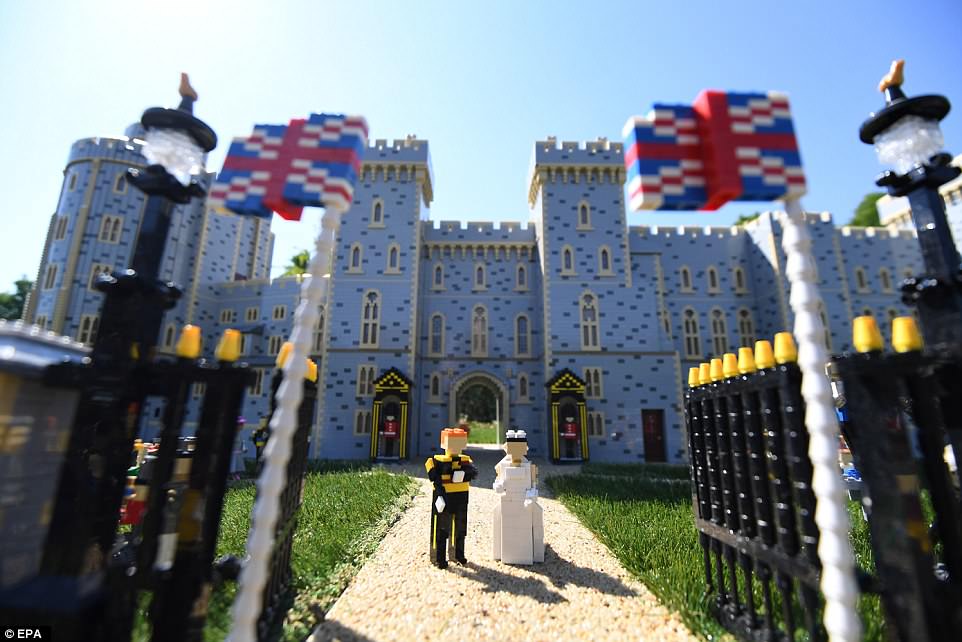 Regal: Lego Prince Harry is outfitted in his military uniform while Meghan Markle is dressed in all white 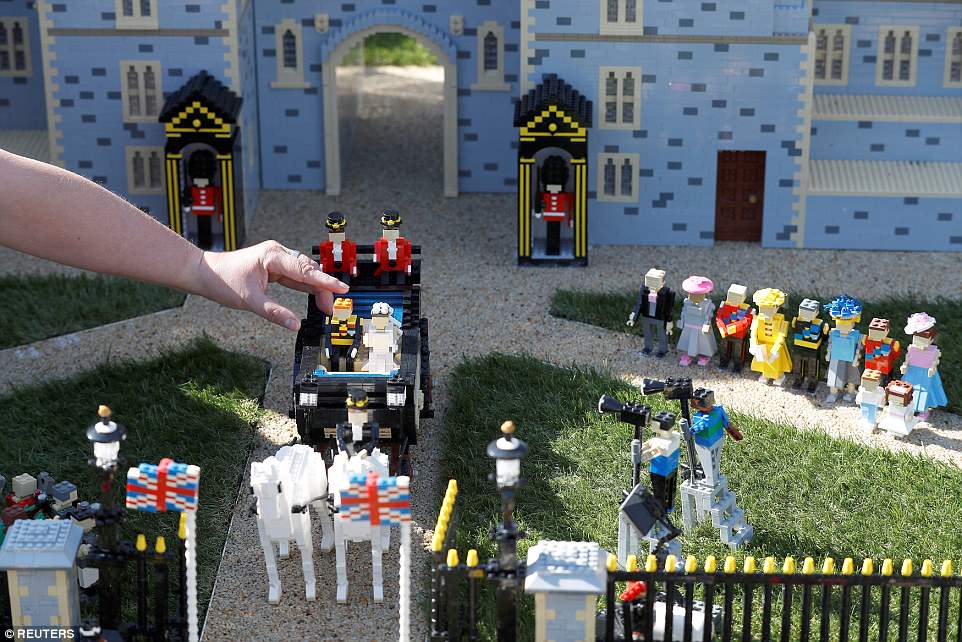 Detailed: The model makers even included Lego media who covered the royal affair. In the back is the royal family cheering on Harry and Meghan 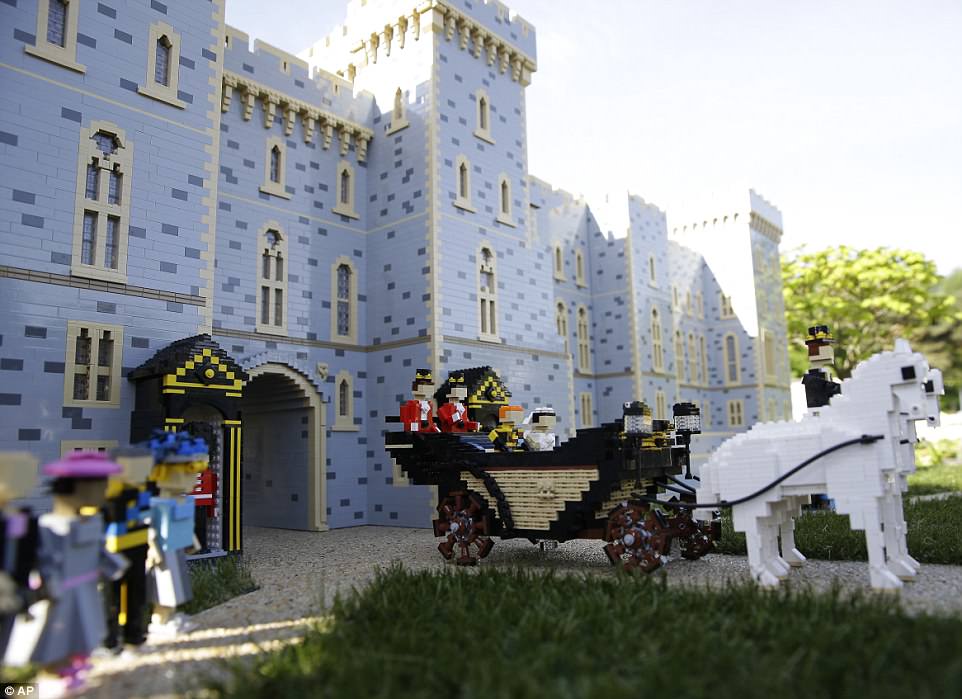 Elaborate: A tiny Ascot Landau carriage is featured outside the Lego castle and took 1,500 bricks to make 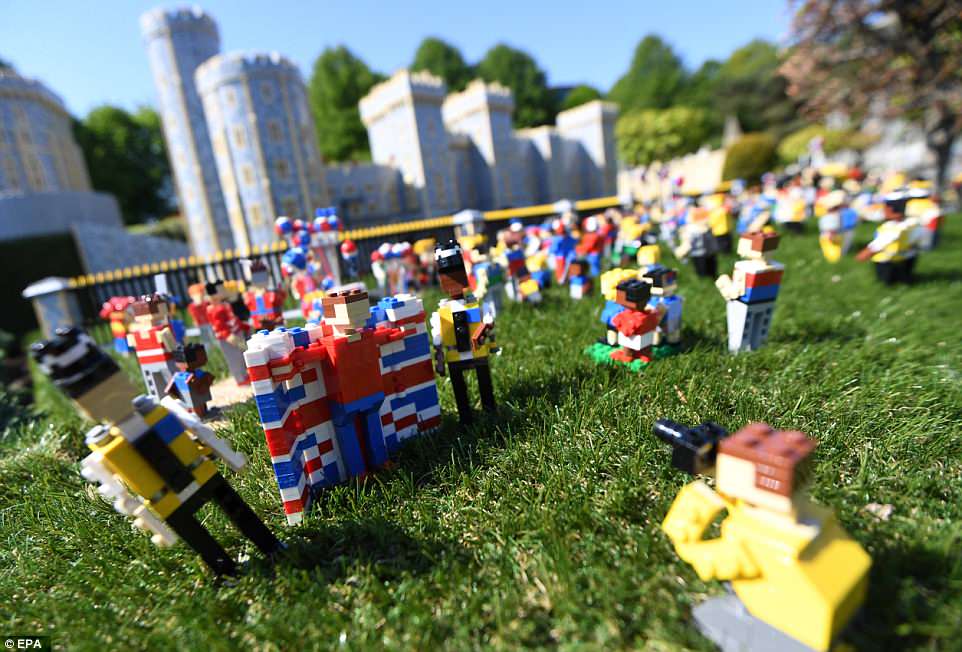 Proud: The model makers created 500 people for the crowd and it took 17,000 Lego bricks 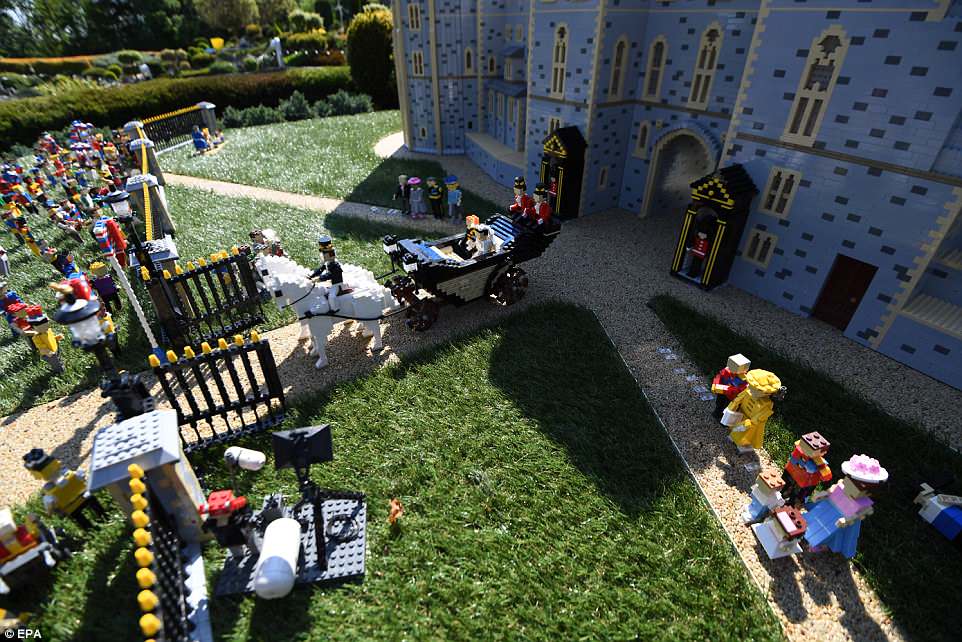 Happily ever after: This is the first time Legoland Windsor has created an exhibit for a royal event. It will be on display through November of this year 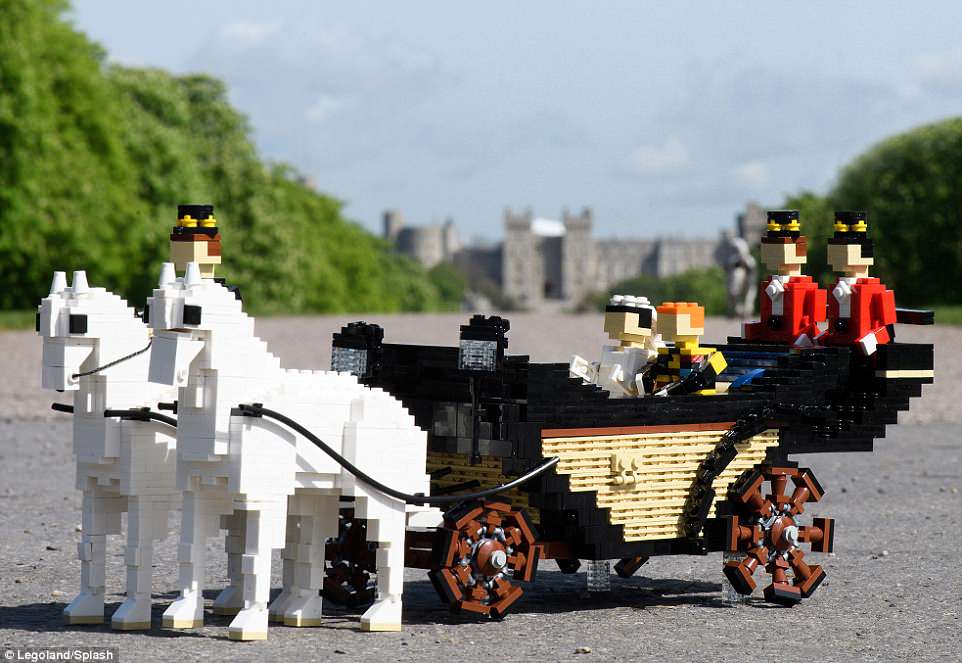 Picturesque: Legoland Windsor is just down the street from Windsor Castle where Prince Harry and Meghan Markle will marry on Saturday

Other details in the scene include horses, palace guards, gates, photographers, and several long banquet tables.

To celebrate the opening of the new exhibit at Legoland, the company staged a series of photos to illustrate the wedding between Lego Meghan and Lego Harry.

People who visit can see the two stand in front of the castle to get married before they are taken away in the royal carriage.

Other high-profile Lego people in attendance include Prince Charles, the Duke of Cornwall and his wife Camilla. Notably missing from the Lego crowd is Prince Louis, but he was probably home with his Lego nanny during the event.

Legoland Windsor will keep the castle and its Lego crowd on display until November of this year for anyone that wants to witness the creation.