Liberal branch members are warning against moves to install NSW Transport Minister Andrew Constance as a candidate at the next federal election amid doubts about whether Gladys Berejiklian might also enter federal politics after she steps down as NSW Premier.

Party members are insisting on full plebiscites to decide who represents them in the key marginal electorate of Gilmore on the NSW south coast after Mr Constance declared his intention of leaving his state job to stand for the seat. 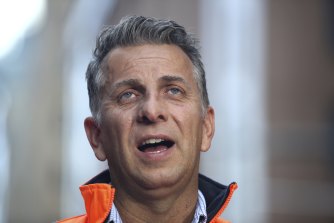 Andrew Constance is quitting NSW state politics in a bid to contest a federal seat.Credit:James Alcock

The comments signal a fight ahead to decide whether Mr Constance becomes the party’s candidate over the claims of local lawyer Paul Ell, who is said to have strong support among the members who would decide the preselection.

“Paul Ell has worked hard to unite the branches, he’s got a lot of energy and drive, everybody likes him,” said one supporter.

Some local Liberals are still smarting from Prime Minister Scott Morrison’s decision three years ago to back Warren Mundine as the party’s candidate at the last election even though he came from outside the electorate.

The move overturned the selection of Grant Shultz as the Liberal candidate for Gilmore, splitting the vote when Mr Schultz ran as an independent and the Nationals chose to run a candidate as well.

Labor MP Fiona Phillips won the seat with 52.6 per cent of the vote after preferences and a swing of 3.3 per cent away from the Coalition.

Mr Constance holds the state seat of Bega, which overlaps the southern sections of the federal seat of Gilmore, and said on Sunday he would leave state Parliament by the end of the year to seek the party’s support to enter federal Parliament.

Mr Morrison said in a statement that he warmly welcomed the state minister’s move to seek endorsement.

“Andrew has an outstanding local reputation and a great deal to offer at the federal level, especially given his experience in the NSW government. He tells it straight and would make a great member of our team,” Mr Morrison said.

The comment triggered anxiety among Liberals who believe Mr Ell deserves a fair chance to contest a preselection without the Prime Minister or his allies imposing Mr Constance.

Supporters of Mr Ell said he was raised on social housing near Nowra and had gone to public schools before becoming a lawyer. He was elected unanimously as president of the Gilmore FEC two years ago and has worked closely with the state MP for Kiama, Gareth Ward.

Liberals have praised Ms Berejiklian as premier but were divided on Monday on rumours she was being approached to run for the party as the candidate for Warringah against independent MP Zali Steggall.

Some see the move as a positive for the party but only after the NSW Independent Commission Against Corruption conducts its hearings into whether Ms Berejiklian engaged in conduct that involved a breach of public trust.

One MP cautioned that the idea would not work because the ICAC inquiry might not be finished by the time the federal party needed to field candidates for the federal election, which must be held by May.

While ICAC said last Friday its hearings were expected to take 10 days, it put no timeframe on when it might make any findings.

Tour operators record 10,000 bookings in a day ahead of lockdown 2.0