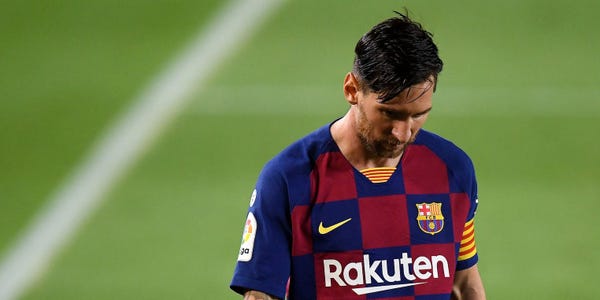 Lionel Messi could be forced to take an entire season away from football if he wants to leave FC Barcelona for free this year, according to a report from ESPN on Monday.

Messi is currently attempting to force a move away from the club he has played for for his entire professional career, but Barcelona is unwilling to let the player, arguably football's greatest of all time, leave without a fight.

The Argentine star has a release clause in excess of $800 million in his Barcelona contract, and a clause which allows him to leave the club for free at the end of every season.

Messi's advisers and Barcelona are currently in disagreement over what the free clause actually means in practice.

Under the clause, Messi can only leave for free if he triggers it before the end of the season, and his team is arguing with Barcelona over exactly when the end of the 2019-2020 season was, the New York Times reported last week.

Messi's team says that because of the coronavirus it ended at the end of August, while Barcelona is saying it ended in June, the originally scheduled end for the season.

According to ESPN, Barcelona has acknowledged that Messi could leave for free this year, but only if he gives up the right to play football for a new club in the coming season.

ESPN cites sources telling the outlet that "the only way Lionel Messi can legally leave for free is if he commits to not playing football next season."

If Messi does leave Barcelona, he is most likely to sign for either Manchester City or Paris Saint Germain, the two clubs who could realistically afford his signature this season.

In recent days Manchester City has emerged as the frontrunner, partly down to Messi's reported desire to link back up with Pep Guardiola, the manager with whom he enjoyed his most successful years at Barcelona.