Home » Lifestyle » Listen to the “CBS This Morning” podcast

Start your day with award-winning co-hosts Gayle King, Norah O’Donnell, Bianna Golodryga and John Dickerson in Studio 57, as they bring you the most important headlines, intelligent conversations and world-class original reporting from around the world.

From news of the day, to extended interviews and podcast originals, you can tune in on multiple platforms.

You can email us your questions, comments and suggestions at [email protected] 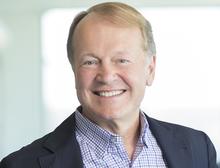 Only on the “CBS This Morning” podcast, former Cisco CEO and chairman John Chambers explains why forty-percent of existing companies won’t be in business in ten years. Talking with CBS News’ Don Dahler, Chambers discusses why the U.S. needs to become a start-up nation. A native West Virginian, he provides examples of companies, cities and states that failed to evolve and got left behind.

Chambers says “it’s better to disrupt or you’ll be disrupted.” He lays out other insights from his decades of experience in his new book, “Connecting the Dots: Lesson for Leadership in a Startup World.”

Duels, canings & armed members of Congress. The fighting on Capitol Hill that lead to the Civil War. | Audio

Former super-agent Michael Ovitz on winning at all cost | Audio

Looking at the culture of sexual assault at elite, privileged schools | Audio

How to Make Our Schools Safe | Audio

Recipe to become your own boss | Audio

Telling Stories From Behind Bars | Audio

The Quest to Build a Heart | Audio

Should You Track Your Kids? | Audio

Ask A Manager: Tips on navigating the workplace | Audio

Putting My Faith in Beyoncé: Life as a Black, Gay Southern Man in America | Audio

David Sedaris on his family and writing what you know | Audio

The potential impact of millennial women in the midterm elections | Audio

Why are Millennials quitting their lucrative jobs to travel? | Audio

Hear from the man behind 3D-printed guns | Audio

The Weakening Of America’s Democracy | Audio

Why is the U.S. the most dangerous place to give birth in the developed world? | Audio

Life after a wrongful conviction | Audio

Preview of the World Cup Final: Croatia vs France | Audio

Pod Save America’s Dan Pfeiffer on Trump, Obama and the future of the Democratic Party | Audio

The guilt, grief, and unexpected gifts of care giving | Audio

Discussing vaping and e-cigs with your teen | Audio

Understanding Suicide and Working to Prevent It | Audio

Dr. LaPook and Dr. Agus on what patients should know | Audio

Ultrarunner Scott Jurek and His Wife, Jenny, On Racing Toward Dreams | Audio

Building a life resume one experience at a time | Audio

Permission to Have Feelings, the Power of Emotions | Audio

A glimpse inside the Obama White House | Audio

The challenges, stakes, and delicate diplomatic dance of the North Korea summit | Audio

How Sweetgreen made salad ‘cool’ using data and storytelling | Audio

The Evolution of the Presidency | Audio

The Truth About Animals | Audio

Iraq vet on helping veterans transition into the workforce | Audio

The Tale of “Roxanne, Roxanne” | Audio

What Is Time? | Audio

The Potential of Solar Power and How to Harness It | Audio

Questlove on being creative | Audio

Louie Anderson on becoming friends with your mother | Audio

Why you should not seek a tan this summer | Audio

From intern to designer, Zac Posen on the Met Gala | Audio

Making sneakers from wool and trees, the story behind Allbirds | Audio

From Upstate N.Y. to War-Torn Sudan, a Doctor’s Journey | Audio

The Story Behind “Empire on Blood” | Audio

Hunting Tornadoes in the Sky | Audio

Author Jacqueline Woodson on reading like a writer | Audio

Why Airbnb is joining the concert business | Audio

Grand Strategy: From Octavian Augustus and Machiavelli to Lincoln and FDR | Audio

The Future of Putin and Reflecting on Stalin’s Gulags | Audio

Meg Wolitzer on her new book, feminism and the importance of mentors | Audio

Barging into the Hollywood Boys’ Club with Humor | Audio

MLK, The Man, In His Final Years | Audio

The Fight for Trans Equality | Audio

Derek Jeter on being a team owner, the future of baseball and fatherhood | Audio

Simplicity and Transparency: Keys to Preventing a Meltdown | Audio

Social psychologist Amy Cuddy on body-mind effects, the science behind it and critics | Audio

Traveling outside your comfort zone with Rick Steves | Audio

Helping the next generation of tech engineers and entrepreneurs | Audio

Etsy COO on the power of women in e-commerce | Audio

The gift of the Enlightenment | Audio

A preview of the 90th Academy Awards | Audio | Video

How young, educated, unmarried women are shaping the future of China | Audio

How much of your information is being collected by Facebook and Google? | Audio

Bestselling Instapoet Rupi Kaur on feminism, being a woman of color | Audio

Would you want to know the date of your death? | Audio

Olympic skier Gus Kenworthy on coming out, being a role model, and his post-Olympics plans | Audio

The key to a long, successful marriage | Audio

John Lithgow on his new play, “Stories by Heart,” and playing Churchill | Audio

The science behind the flu with. Dr. David Agus | Audio

The History of the State of the Union address | Audio

Tips for changing and improving your professional life in 2018 | Audio

Tackling the disability of poor vision in underdeveloped countries | Audio

Tips for parents on keeping their New Year’s resolution | Audio

A.J. Finn on new psychological thriller, “The Woman in the Window” | Audio

Having the willpower to keep your New Year’s resolution | Audio

Drugs, disco and debauchery: Miami in the 70s | Audio

Gloria Estefan on working with her husband, returning to Cuba and President Trump | Audio

What the repeal of Net Neutrality means for you | Audio

Helping to take care of “society’s most vulnerable” | Audio

MailChimp CEO on the power of small businesses | Audio

When the holidays hurt, how to deal with suffering and find healing | Audio

The story behind theSkimm | Audio

Dancing to the edge and back, David Hallberg on his new memoir | Audio

Travel editor on the holiday travel season, the Caribbean and places to visit in 2018 | Audio

How to survive Thanksgiving with your family | Audio

Esperanza Spalding on her new album, the special meaning of the number 7 and her Grammy moment | Audio

“Louis the Child” on the state of electronic music, their future & the power of SoundCloud | Audio

The story behind the Backpage.com investigation | Audio

Why Millennials are underpaid, overworked, and under appreciated | Audio

“Young Sheldon” star, Iain Armitage, on making the role his own | Audio

The siblings behind “IT” and “Jigsaw,” this year’s biggest horror films | Audio

Comedian Patton Oswalt on the loss of his wife, finding love again and the future of comedy | Audio

Charlie, Norah and Gayle find out the best way to get a good night’s sleep | Audio

What Equifax’s security breach means for you | Audio

Investor and “Principles” author Ray Dalio on the keys to success, meditation, and creativity  | Audio

Brené Brown on her new book, “Braving the Wilderness: The Quest for True Belonging and the Courage to Stand Alone” | Audio

Steve Bannon on Clinton, the Republicans and election night | Audio

Ken Follett on his new book, “A Column of Fire” | Audio

Making sense of the market with Jill Schlesinger | Audio

Author of “Happiness: The Crooked Little Road to Semi-Ever After” | Audio

Solar eclipse: What you need to know | Audio

‘Gilligan’s Island’ star Dawn Wells reveals what she’s grateful for in 2020: ‘This is the country I love’

Bank worker forced to remortgage her home after rogue builder