24 Hours in Police Custody viewers were left ‘heartbroken’ after a man who was left at the brink of death following a violent incident at home died from a heart attack six days later.

In last night’s episode of the Channel 4 show, 42-year-old Paul Jenner, from Houghton Regis, Bedfordshire, was found by police at his home with a severe brain injury. He was quickly transferred to hospital, but doctors said the chances for his survival were slim.

His partner Sherry Naidoo was seen smirking as she was arrested on suspicion of grievous bodily harm with intent after being accused of hospitalising her partner – who required urgent treatment for serious brain trauma after enduring two bleeds to the brain.

The incident took place just six days after Sherry had been released following a six month prison sentence for another assault on him that required medical attention.

And police officer Alicia Lawrence, who had met Paul before, was posted to Major Crimes when his injuries proved fatal – and admitted she ‘knew it would come to this.’

‘There’s quite an extensive history between them – largely assault from his partner Sherry Naidoo to Paul,’ Alicia explained to a colleague assisting on the case. ‘Paul wouldn’t engage in the first investigation but the jury found her guilty of ABH within 45 minutes. So she got a 50-week sentence and with time service she was released – so within six days she’s assaulted him again.’ 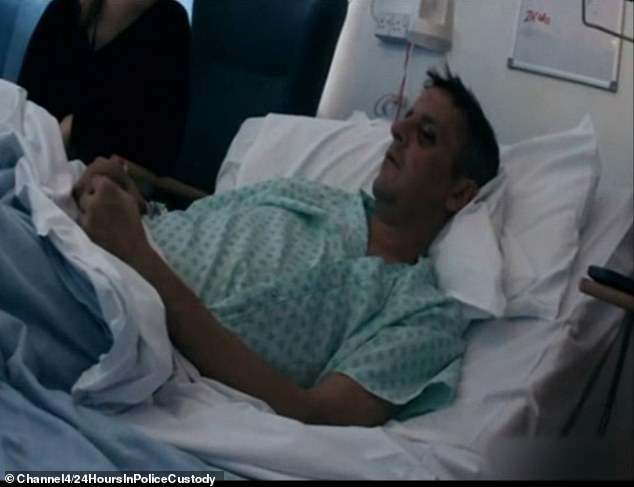 In last night’s episode of Channel 4’s 24 Hours in Police Custody, 42-year-old Paul Jenner, from Houghton Regis, Bedfordshire, was found by police at his home with a severe brain injury. Pictured, in hospital 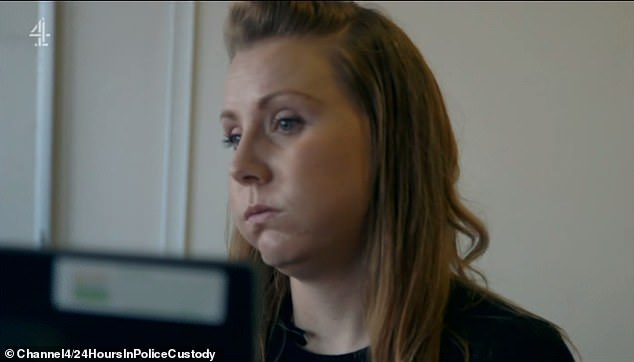 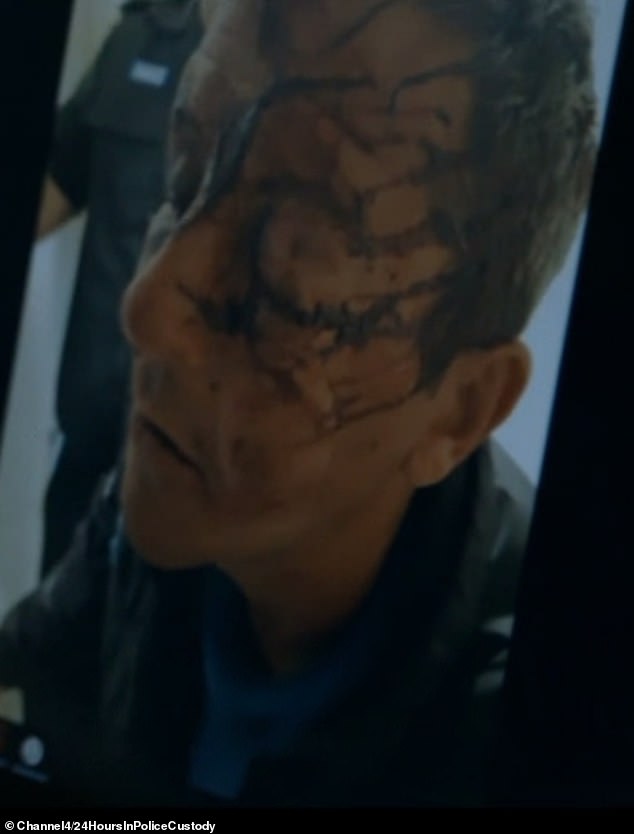 Taking to the comments section, one person penned: ‘This episode is breaking my heart. RIP Paul (pictured)

‘Paul was taken to hospital, they scanned him and he’s got two bleeds on the brain. We’ve got minimal contact with him because he’s in and out of consciousness with very severe injuries. Apparently the doctor said he’s surprised he’s still alive.’

She added: ‘I knew it would come to this. I said it after court to prosecution and defence, ‘One day she will kill him.”

At court, Sherry admitted assaulting Paul Jenner but the Judge ruled there was insufficient evidence to prove this was the cause of his death. Instead, she was found guilty of Actual Bodily Harm.

The Judge accepted that her life had been extremely troubled and that she had also suffered domestic violence in a previous relationship. She was sentenced to 16 months in prison.

During the emotional episode, Paul was moved to a specialist brain tumour unit at Adenbrook’s hospital due to the severity of his injuries.

‘Sherry came in on the Monday to pick up her property from the last job,’ explained Alicia. ‘She and Paul were in the inquiry office. I didn’t recognise Paul because I couldn’t meet him – he wouldn’t engage with us. And the only pictures I’ve seen on him are horrendous.’

‘They were sat down and Sherry made a joke of it and said, ‘She doesn’t even recognise you. I was like, ‘Why would I?’ 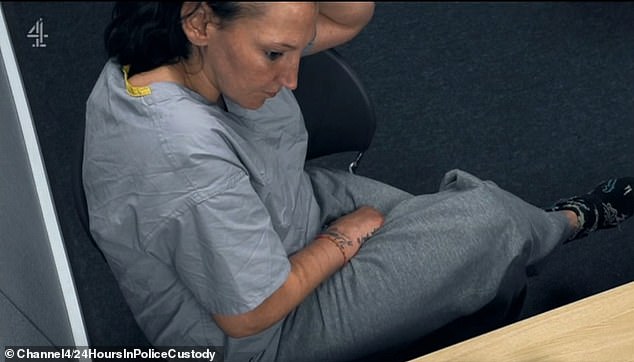 At court, his partner Sherry Naidoo (pictured), admitted assaulting Paul Jenner but the Judge ruled there was insufficient evidence to prove this was the cause of his death. Instead, she was found guilty of Actual Bodily Harm.

In a particularly poignant moment, Paul was asked where he wanted to go, to which he replied: ‘Heaven’ (pictured)

‘I handed all the property over to Sherry and sent her on her way with her belongings and as Paul walking past Paul gave me a high five and did a wink at me which I almost took as a thank you.’

‘At that point, I couldn’t see any injuries on him – he seemed fine. We’ve now got these massive head injuries and possibly a fractured eye socket as well.’

However, Alicia explained how Paul has always been loyal to Sherry.

‘When I’ve looked back through all the history, there have been so many assaults that have been reported to us that Paul refused to provide any statements and wouldn’t name who assaulted him,’ she explained. ‘But sometimes a victim literally can’t take it any more and something will change, they’ll come forward and speak to us.’ 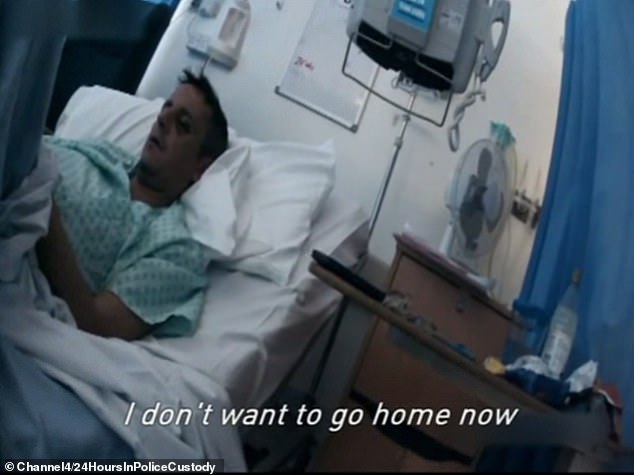 When Alicia went to visit Paul in hospital (pictured), he eventually admitted that he didn’t want to go home

And an assisting officer on the case tracked down the 999 call made from the hospital – where Paul named his partner Sherry as the culprit.

Speaking to the dispatcher, he said: ‘I’ve been violently attacked again by my partner. I’m in intensive care. She’s been in prison for six months and she’s come out and done it to me again. I’ve just got to get out the relationship now haven’t I?’

The call handler responded: ‘Yes, I would say so. People who love you don’t hurt you like that.’

Police then seeked independent witness testimony to bolster their case – making them realise that the incident may have started the night before.

Knocking on one door, a witness claimed: ‘When he turned up, about Thursday I reckon, he was standing there. I could see he had a black eye and some cuts on his face I think.’

Another recalled: ‘So literally, we were sat here watching TV, looked out my window and he’s sat slumped over on the floor.

‘She’s come walking round here screaming at him, ‘Why are you on the floor?’ Get the f*** off the floor.’ And some woman’s come out the alleyway here and the next minute she’s gone polite…which is very much what she does.’

But after learning Paul’s condition had stabilisied, Alicia was devastated to hear that his statement said that she and her officers ‘had it all wrong.’

He claimed he hit his own head on the wall, Sherry has done nothing wrong and that he loved he and wanted to know when she’d be released. 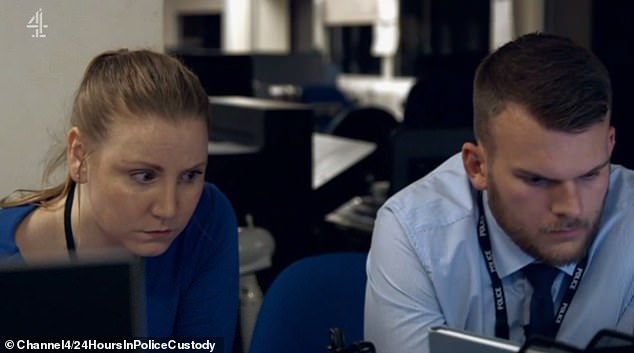 When taken into interviewing, Sherry refused to answer any questions. That was, until, she was played the 999 call where Paul named her as the person responsible for his injuries.

When asked what she made of the call, Sherry responded: ‘It’s bullsh***ing coming out of his mouth. I didn’t do nothing to him, that’s what’s doing my f****ing head in. ‘I got in a mood, having an argument…’

With a GBH charge secured against Sherry, police visited victim Paul to offer him another chance to support the case.

‘After the last job I said to prosecution and defence prosecutors, ‘She’ll kill him one day,’ and they said, ‘Yes she will.’

‘I didn’t actually think we’d be here this quickly. If she kills him, I don’t want that on my conscience. I desperately want him to come on board. I’ll do as much as I can possibly do to help him out of that situation If he won’t, he won’t. I think once I’ve tried, I’ll feel better.’

But when she arrived and asked how he was feeling, Paul responded: ‘Pi***ed off because Sherry’s been locked up for no reason this time.’

Alicia replied: ‘We both know you didn’t cause those injuries to yourself,’ but Paul claimed he got drunk, fallen over and smashed his head on a shoe rail.

He added: ‘It was my own stupid fault.’

After Alicia spoke to him and reiterated how it ‘doesn’t have to be like this,’ Paul admitted he ‘doesn’t want to return home’ and accepted the offer of a call from a victim engagement officer to arrange housing.

And in a heartbreaking moment when asked where he would like to go if he was to be give a magic wand, he replied: ‘Heaven.’

Then six days after the visit, Alicia received the devastating news that Paul Jenner had had a heart attack and fell into a coma – and later that night, he died. 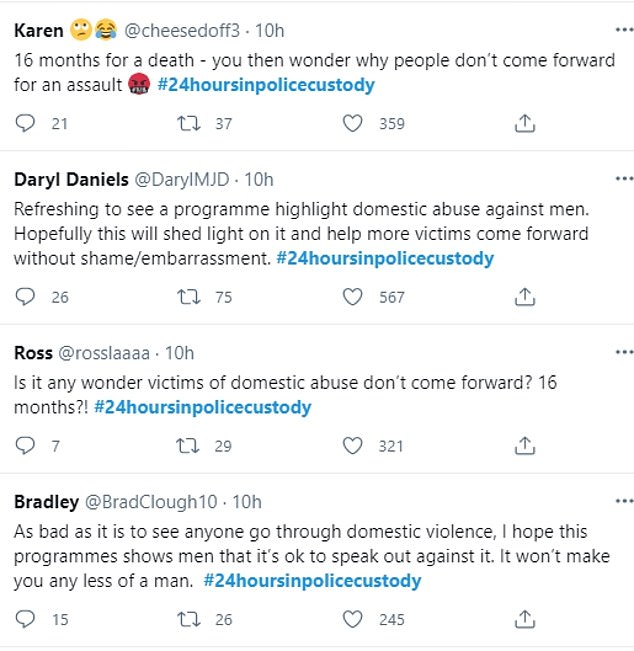 Taking to the comments section, one person wrote: ‘Refreshing to see a programme highlight domestic abuse against men’ (pictured)

Taking to the comments section, one viewer penned: ‘This hits all the harder now. RIP Paul, I hope you know peace now,’ while a second commented: ‘Well good old British justice again. Failed Paul, the police and all of us. His life was worth 8 months on good behavior. A f****ing travesty. RIP Paul.’

A third added: ’16 months for a death – you then wonder why people don’t come forward for an assault Face with symbols over mouth,’ while a fourth agreed: ‘Is it any wonder victims of domestic abuse don’t come forward? 16 months?!’

A further penned: ‘I am RAGING just watching this hateful monster. How do the police keep their professionalism in such scenarios? Hats off to them.’

Elsewhere, others praised the programme for highlighting domestic abuse against men.

‘As bad as it is to see anyone go through domestic violence, I hope this programmes shows men that it’s ok to speak out against it. It won’t make you any less of a man,’ wrote one.

A second commented: ‘Refreshing to see a programme highlight domestic abuse against men. Hopefully this will shed light on it and help more victims come forward without shame/embarrassment.’

A third added: ‘This episode is breaking my heart. RIP Paul, if anything good can possibly come from this it’s raising awareness that men can just as much be subject to domestic violence as women. Don’t be afraid to get help.’

Harry's pals called him 'f***ing nuts' for dating Meg after she told them off for defying her woke values, claims book | The Sun

Spoilers: Harvey terrified for Jean as they get engaged in EastEnders