Home » Man, 29, loses TWELVE stone during lockdown 'for his family'

Obese father, 29, who feared he wouldn’t see his children grow up loses 12st during lockdown by ditching his junk food addiction – and is now cycling a marathon every day for charity

A man has revealed his incredible 12 stone weight loss in just nine months during lockdown – after fearing he wouldn’t be around to see his children grow up.

Tim Kershaw, 29, from Dudley, West Midlands, weighed 26.6 stone and would gorge on takeaways and a sharing bar of chocolate every night after coming home from work feeling exhausted.

The father-of-two, who works as an assistant business leader at McDonald’s, admitted he would often make ‘excuses’ for feeling tired whereas the real reason was that he was ‘overweight’.

But during a family walk in the first lockdown, Tim suddenly decided that he was going to start losing weight because he finally felt it was something he could achieve.

Tim, who credits his weight loss to adopting a healthier diet, cutting back on takeaways and working out on an exercise bike, is now cycling a marathon every day of April to raise money for the Ronald McDonald house charities, which provide accommodation for families with sick children. 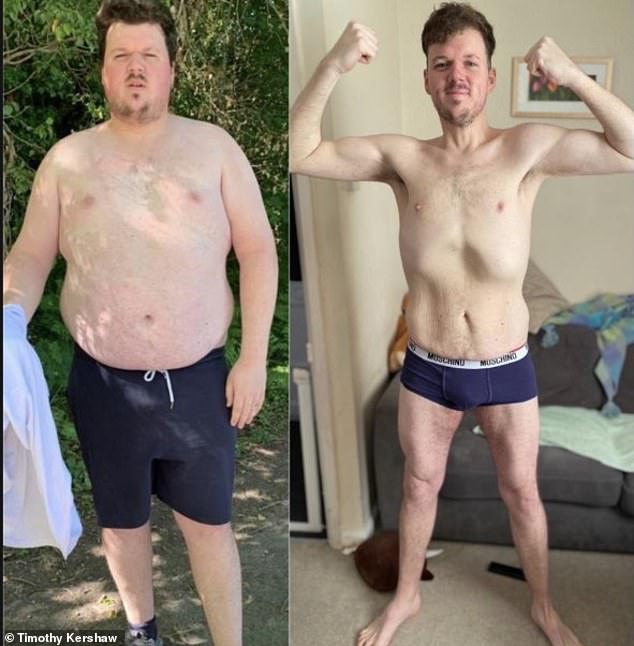 Tim Kershaw, 29, from Dudley, West Midlands, has lost a staggering 12 stone (right) in just nine months during lockdown so that he can be there for his children for their ‘whole lives’

Speaking to FEMAIL about his decision to lose weight, he explained: ‘I work at McDonald’s and we closed in March, in the first lockdown when everything was closed, and I was just on a family walk in May.

‘I was on a nature reserve walking and there were some steps we always walked up, so I said to my wife “I’m going to run up the steps and I’m going to start losing weight from now”.

‘It was kind of just a click in my head moment and it all just felt like I could do it.’

Tim wanted to lose weight for his son Abel, two-and-a-half, and his wife Rebecca, 26, who at the time was pregnant with their second child Liah, now seven months.

He explained: ‘The reason for doing it was for my family. My wife was pregnant at the time and I suppose I was thinking forward to when the baby was born, I wanted to look nice in the photos and look back of the photos and think “I was a better version of myself than now”.’

He admitted that at first, his wife of six years thought he was ‘crazy’ but quickly realised how dedicated he was and noticed he was achieving his goal. 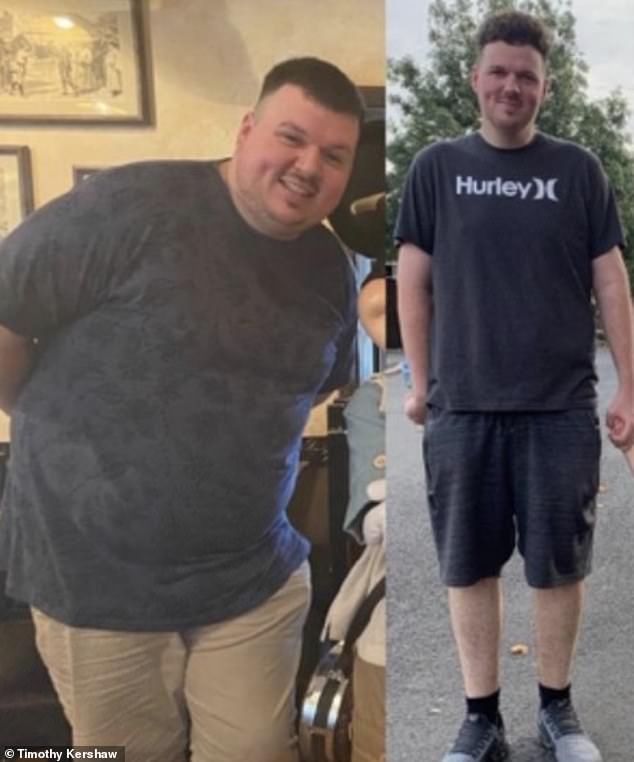 Tim, who is 6ft4, weighed 26.6 stone (left) and would eat takeaway food and a sharing bar of chocolate every night after coming home from work feeling exhausted

Tim explained that he wanted to lose weight for his family, admitting that he didn’t have time to play with his eldest child Abel due to feeling ‘tired’ all the time.

He added that although he has always been ‘reasonably big’, he began putting on weight after getting married six years ago because he became ‘comfortable’.

He continued: ‘I’ve always been reasonably big, but I suppose since I got married, we got comfortable, ate out a lot, got a lot of takeaways and it was just an easier option to get home and have a takeaway and a bit of chocolate. It’s just been a gradual incline I suppose.’

Tim admitted that he was ‘kidding himself’ into thinking that everyone felt that exhausted after work and he would find ‘excuses’ when the real issue was that he was ‘overweight’.

He said he wanted to improve his health so he could be around for his two children for their ‘whole lives’ and see them grow up.

He continued: ‘Obviously I was tired when I got home from work and didn’t really have much time for my eldest and it was very much about being a better family man, better husband, better dad.

TIM’S DIET BEFORE AND AFTER HIS WEIGHT LOSS

Breakfast: Skip breakfast or order bacon sandwich from a cafe

Lunch: Eat at work at McDonald’s (varies between items on menu)

Late dinner after 8pm: Takeaway – for example, Indian takeaway with a starter, main course and at least two side dishes

Dessert: Sharing bar of chocolate and dessert with takeaway

Lunch: Eat at work at McDonald’s (choosing a smaller portion) and brings his own salad to work

Schedules in treat days or takeaway days during the week 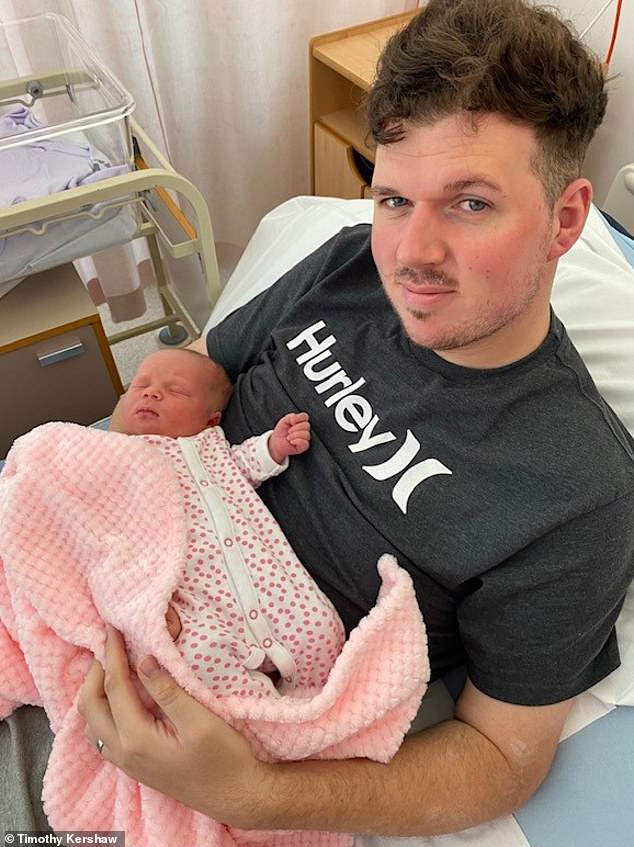 Tim (above with daughter Lilah, now seven months, after weight loss) said his weight loss was very ‘drastic’ after he started his health kick, which saw him change his diet and start cycling

Tim managed to lose a staggering 12 stone over just nine months amid the Covid-19 pandemic by adopting a healthier diet, cutting back on takeaways and working out on an exercise bike, starting with just five minutes a day.

He recalled: ‘I was in such a comfortable lifestyle, we were having a lot of takeaways and eating late at night, snacking a lot, wasn’t really having three meals a day. I knew straight away that I needed to have three meals a day and cut down on snacking.’

Before his weight loss, he admitted that he had only used the seven-year-old bike a couple of times, but began using it almost every day as part of his fitness drive.

Tim explained: ‘The only exercise other than family walks, which I wouldn’t really class as exercise, was an exercise bike.

‘I’d had an exercise bike for five years which I’d maybe used twice and I just said “I’m going to start using the bike”. I started by doing five minutes, that’s all I could do, and then built it up.’

Tim said his weight loss was very ‘drastic’ and he amazingly lost 12 stone in just nine months, averaging at a loss of around seven pounds every two weeks.

The father admitted that his mental health has ‘a million per cent’ improved since his weight loss, saying that the first thing he does every morning is exercise.

Tim added that his eldest child Abel, two, sees photos of him before his weight loss (left) on the fridge and often comments on Tim’s drastic change in weight (right)

Tim, who is 6ft4, said shedding weight has also helped him to feel more ‘comfortable’ and allows him to shop in high street stores, rather than shops ‘specifically for bigger people’.

Speaking about his weight loss, he explained: ‘It was quite drastic the whole way through. So the 12-month stage is where I am at now, but I lost the 12 stone in nine months.

‘The first month, I probably lost two and a half or three stone, but then I was losing about seven pounds every two weeks.’

Tim revealed that his father, who he hadn’t seen in a while due to the Covid-19 pandemic, didn’t even ‘recognise’ him when he lay eyes on him for the first time after his weight loss.

He explained: ‘I hadn’t seen my parents in a little while, obviously because of the rules, but my dad was so shocked and didn’t recognise me!

‘I had a mask on, and he kind of looked three times and then realised it was me. It was very strange. I think it was a mixture of the mask and the weight loss. I look like a completely different person I suppose.’

Tim added that his son Abel sees photos of him before he shed the pounds on the fridge and comments on Tim’s drastic change in weight.

Tim is now using his new healthy lifestyle to raise money for Birmingham’s Ronald McDonald house charity, which provide families a place where they can cook, rest and recharge while their child is in hospital. 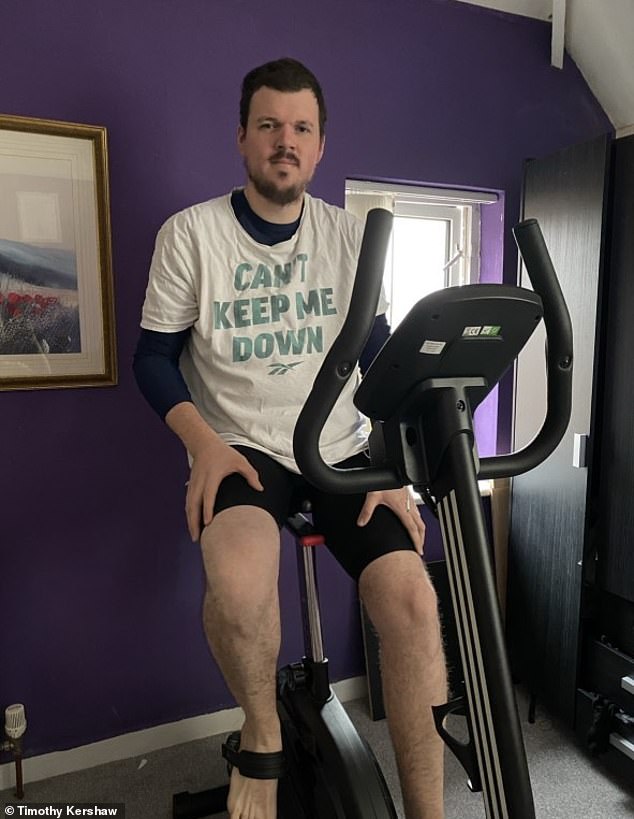 Tim is now cycling a marathon every single day for the month of April to raise money for Birmingham’s Ronald McDonald house charity, and he has already raised £3,820

He is cycling a marathon every single day for the month of April to raise money for the charity, and he has already raised £3,820 from 195 supporters.

Before his charity challenge, Tim was cycling around 45 minutes three to five days a week, but is ‘pushing’ himself to achieve an hour and a half, which totals 42.2km, for thirty days straight.

He decided to raise vital funds for the charity after visiting one of the Ronald McDonald homes and said the experience ‘stuck with him’.

He continued: ‘About nine years ago, I was allowed to go to the house and have a look around and it stuck with me I suppose.

‘I just saw the positivity in the house and the parents were having a bit of relief and just a bit of positivity away from their child being seriously poorly next door in the hospital.

Tim also admitted that he hopes he can inspire other people who want to change their lives by sharing his story, saying that being overweight is not a ‘life sentence’.

He said: ‘I want people to know that being overweight and not being in the best mental place isn’t a life sentence, there are things you can do and you can help yourself.

‘I’m just a normal person whose got a normal job, using a seven-year-old exercise bike that’s been used a couple of times.’

Dead to Me season 3 release date, cast, trailer, plot: When is LAST season out?

In Honor of Her 64th Birthday, Here Are Kris Jenner's Greatest Throwback Photos

Syrian intelligence agent is convicted for crimes against humanity