On Saturday, fans of Network 10's The Masked Singer were meant to be watching a live video feed of the program – which is filming its second season in Melbourne – inside a Sydney theatre. Victoria's soaring COVID-19 infection rates had already prompted producers to abandon plans to host an audience on set; instead, they intended to beam footage of the show being recorded to Paramatta's Riverside Theatre, then splice snippets of viewers' reactions into the final edit.

But growing concerns about COVID-19 transmission in NSW forced producers to scrap those plans, too. Instead, Masked Singer enthusiasts can apply online to observe live tapings via Zoom. They will also be encouraged to vote for their favourite singers, all of whom are celebrities wearing elaborate disguises. 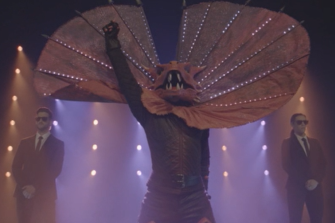 A celebrity disguised as a frilled-neck lizard performs in the second season of Network 10’s The Masked Singer.Credit:Network 10

Zoom audiences are just one measure adopted by TV networks to allow filming to continue in Melbourne, where stage 3 pandemic lockdown restrictions have thrown production schedules into disarray. For the first time ever, Nine's renovation show The Block will not be open to the public prior to the televised finale (Nine is the owner of this masthead), while the ABC's contingency plans were put to the test last week when the wife of an ABC News Breakfast employee tested positive to coronavirus.

As we’ve learnt from the coronavirus so far, things change quickly.

Last year, 10 announced that a shortage of studio space in Sydney meant the second season of The Masked Singer – which averaged 1.34 million viewers nationally across its month-long run in 2019 – would be recorded in Melbourne. But social distancing requirements created an ongoing headache for producers.

"We are following all government guidelines to ensure the safety and wellbeing of all cast and crew," a Network 10 spokeswoman said. "This has meant the team has had to find some creative ways to continue filming the show in these challenging times." 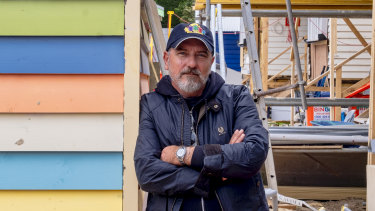 Julian Cress, executive producer of The Block, said he hoped the show would be able to film its auctions in November but was making contingency plans should restrictions still be in place.

"Any easing of these current restrictions would allow us to conduct an auction where the few serious bidders are able to stand in the kitchen of one of those houses and bid," he said. "We usually only have a few registered bidders for each of the homes anyway; maybe 10 or 12.If by the end of November we're not in a position where we can hold a [small] public auction in Victoria, then we've got much bigger problems than The Block."

Cress is open to the idea of holding auctions with only five or six bidders and isn't ruling out the possibility of conducting them online. He says any "speed humps" will be incorporated into the overall storyline and will not affect the quality of the show, which averaged 1.41 million viewers nationally in 2019.

"We're talking about something that's going to happen towards the end of the year," he said. "As we've learnt from the coronavirus so far, things change quickly."

On Thursday, ABC presenters Madeleine Morris, Ben Knight and Georgie Tunny began covering for News Breakfast anchors Michael Rowland, Lisa Millar and Nate Byrne, who chose to self-isolate after the wife of the program's floor manager tested positive to coronavirus. The manager has since tested negative and the show's regular team will return to ABC's Southbank studios on Monday.

A Nine spokesman confirmed that new episodes of the Melbourne-made Millionaire Hot Seat will resume filming in the coming weeks with "strict adherence to health department guidelines". Producers have no plans for a live audience at this stage.

Some fears about Huawei are 'complete nonsense', Orange's boss says

Every style move that Kate makes this woman will copy

The Best Way To Cover Up Blemishes, According To Kelly Rowland’s Genius Hack — EXCLUSIVE