Richard Pitts was preparing to welcome visitors to SkyHigh Mount Dandenong after Victoria’s fourth lockdown when savage storms laid his plans to waste.

The tourism business, which includes a wedding venue, bistro, cafes and maze and has sweeping views of Melbourne, is closed to the public while the clean-up continues in the Dandenong Ranges. 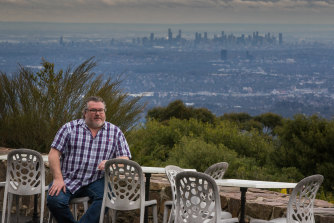 Mr Pitts said the extended closure after the storms had struck a heavy blow after the coronavirus lockdown.

“The majority of staff have been stood down, just waiting for us to reopen,” the SkyHigh general manager said. “We’re now in the fourth week of being closed.”

The business was due to reopen just before the Queens Birthday weekend, but is now only serving a handful of workers who are taking part in the clean-up effort.

“It’s been a massive financial hit for us and all businesses up here.” 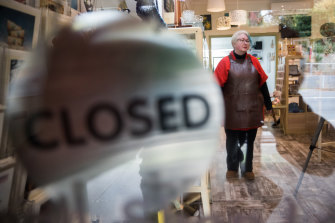 Ms Campbell, who sells her own jewellery among other products at her shop, closed last weekend so that she could take a break from the stress of the storms.

She said some non-local people had managed to get through roadblocks, but described them as “ghouls” who had been asking where they could find houses that had been smashed by trees. “I just would have broken down with those sorts of questions,” Ms Campbell said.

She said some business owners have had enough after four coronavirus lockdowns and the recent storms. “I’ve heard that from a number of people. For me I’ll keep struggling on.”

The storms and floods that began on June 9 wrought devastation in much of the state, leaving many homes uninhabitable.

Emergency authorities are preparing for rain of up to 10 millimetres in the Dandenongs on Friday, which could compound damage to unstable trees and roads.

An Emergency Management Victoria spokeswoman said it was important that anyone planning a road trip stayed away from flood and storm-affected areas until they were safe.

She said more than 600 kilometres of roads had been cleared in the Dandenong Ranges with emergency services and utilities companies still clearing trees to restore power.

Energy distribution company AusNet Services confirmed 1434 households and businesses remained without power on Wednesday morning. They are all in the Dandenong Ranges apart from 15 in Gippsland.

A company spokeswoman said about 600 electricity workers were out in the field trying to restore power on Wednesday, but the company was monitoring strong winds to ensure its employees were not endangered by further falling trees.

So far $523,680 has been paid in emergency relief payments to 449 recipients, but even though businesses might get government grants and insurance might cover some losses, operators said recent events have still taken a massive toll on their livelihoods.

Alan Olney, who owns the Ranges Cafe and Bar and five holiday cottages in Olinda, said his businesses had been hit hard. 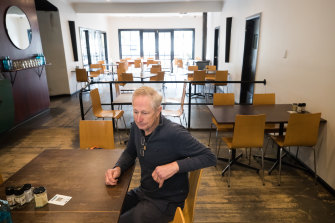 He received some welcome news on Wednesday with a text message from AusNet notifying him he may be eligible to apply for the state government’s prolonged power outage payment for businesses.

However, Mr Olney said the storms had come through just before the Queen’s Birthday weekend, which is usually among the busiest of the year.

“We had to cancel all the bookings over the Queen’s Birthday weekend,” he said.

The storms severely damaged three of his cottages, and he expected the accommodation could be closed for six months. While the cafe and restaurant has remained open, Mr Olney said it was almost deserted.

“We’re just looking after the locals more than anything else. But there’s not many of us here. We rely on Melbourne tourists coming up.”

Ingrid Wilde, director of fashion and accessories retailer Where the Wilde Things Are in Olinda, said her business had suffered a loss of turnover during the two-week period since the storm of between $10,000 and $12,000.

She said businesses should be eligible for some kind of assistance from the government because of the difficulties they now face.

“We may not be able to trade for another two or three weeks,” she said.

Which Crew Members From 'Below Deck' and 'Below Deck Med' Started a Twitter War? – The Cheat Sheet

Chinese New Year 2020 date and how it is celebrated